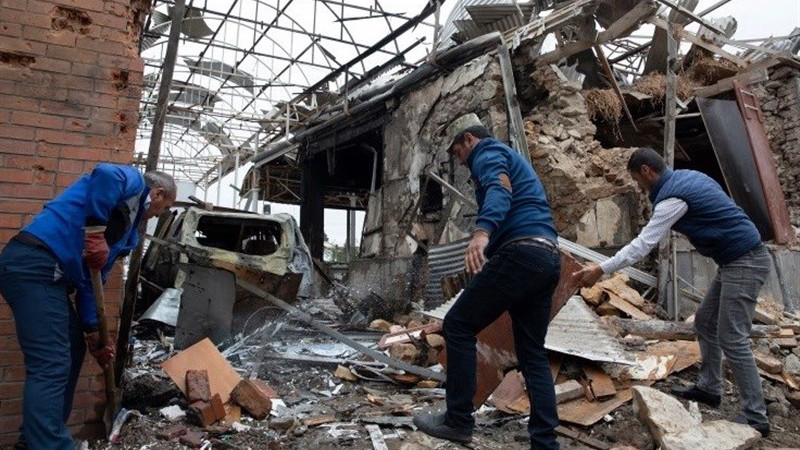 The Karabakh peace accord of 10 November 2020 between Azerbaijan and Armenia brought an end to a 30-year conflict that has cost almost 40,000 lives over this period. The world now watches on as the region tries to rebuild, recover, and reconcile. One struggle, however, is seldom talked about or reported on – the psychological fallout of war, particularly for those on the frontline. Both soldiers and civilians will be beset by mental health problems as a result of the fighting. Indeed, it is estimated that between 20-30% of military veterans experience Post-Traumatic Stress Disorder (PTSD). In Azerbaijan, the recently formed YASHAT Foundation was established to support war veterans and their families financially, signifying the importance attached to care for veterans.

Azerbaijan has also established a commission chaired by the Minister of Health to provide psychological support to servicemen and their families affected by the Karabakh conflict. The Labour and Social Protection Ministry is also assisting veterans by implementing plans to provide war veterans with housing between 2021-2025. The State Social Protection Fund has already paid out social welfare payments to over 7000 family members of the near 2800 Azerbaijani martyrs killed in the conflict, while also increasing the pension pot for affected families. The Ministry of Emergency Situations is also playing its part having invited 20 specialist Turkish doctors to help treat hundreds of veterans suffering from PTSD. These measures are indicative of the importance and understanding attached to the issue of PTSD and care for veterans in the country.

PTSD often arises from experiencing or witnessing intensely threatening or stressful events. The symptoms range from anxiety and depression to insomnia, nightmares, and anger, yet sufferers are seldom aware of their diagnosis. Most go untreated. In Azerbaijan, this is a relatively newly understood phenomenon. Across Europe however, there are numerous charities, like ‘Combat Stress’ in the UK, operating a 24/7 helpline offering confidential mental health advice to veterans and their families. In the United States, the PTSD Foundation of America also provides support to veterans suffering from associated issues. The governments of both countries invest a considerable amount of money in assisting veterans returning from the frontline. Yet some remain mentally ‘left behind’ on the battlefield.

Bolstering capacity, investment and the number of experts specially qualified to deal with such mental trauma and therapies is to be roundly welcomed. The more fundamental problem, however, is that mental illness the world over is often stigmatised, further impacting and scarring those suffering from said issues. Veterans, returning from the extreme conditions of war are often severely impacted by such stigma. Some of them not only have to deal with readjusting to their old lives but also suffer in silence while dealing with PTSD. Due to a lack of awareness and the stigma attached to mental health, we fail in our moral duty to take care of these individuals who have risked their lives for our safety, wellbeing, and homeland.

A sense of awareness begins with understanding that PTSD is common amongst soldiers. Studies indicate that as many as 20-30% of US troops returning from Iraq and Afghanistan suffered from psychological illness. Despite high levels of psychological trauma, many veterans are ashamed to turn to their loved ones for help. An Azerbaijani veteran, Qasim, who fought in the war between Armenia and Azerbaijan in the early 1990s, described how his family and friends questioned his bravery, fortitude, and manliness when he told them about his suffering. Qasim and countless other veterans, often turn to alcohol to numb the pain. Rather than reducing veterans to self-medicating in silence, we need to address and confront these issues. Effective medical treatment and an open discussion will help both soldiers and societies heal faster from the horrors of war.

Military conflict also exacts a heavy toll on civilians. In 2019, WHO found that one in five people in war zones suffer from mental health conditions. Those living in the borderlands of Karabakh, having experienced fighting over many decades, could be, if not definitely will be, significantly impacted. Psychiatrists have coined a medical term to describe the rapid increase in stress-related mental and psychical illnesses that followed the war’s immediate aftermath in the 1990s – ‘Karabakh syndrome’. An entire generation has known nothing but war in the mountains of Azerbaijan, with many who suffer from PTSD having contracted the condition after the first 1994 ceasefire and bearing witness to years of short and sharp fighting between the two sides on the line of contact. Their one solace being that Karabakh is for the first time in over thirty years free from Armenian occupation and rightly restored to Azerbaijani control in accordance with international law.

Psychological war injuries should be approached with the same respect and urgency as we do for those who have suffered the physical horrors of conflict. Everyone deals with stress and trauma differently, but we should not underestimate the seriousness of this predicament. Azerbaijan is a small country. Most of our citizens will know someone affected by the war or injured or killed in battle. Only through time and openly talking about these experiences will we be able to truly overcome it. We need to begin by liaising with international health organisations so our doctors can receive the training and expertise they need from abroad. We also need to create and widely support social awareness programs that highlight the importance of mental health and the tragic consequences if we do not heed or spot the tale-tell signs of desperation and trauma.

Journalists also have a critical role to play in raising awareness of this important issue. Our mental health staff should receive the best possible training to be able to deal with the challenge of PTSD. Additionally, we must focus on dealing with this issue before the trauma associated with the war becomes a more entrenched disorder. Medicine alone will not remedy this issue. Every sufferer needs an individually tailored approach to tackle the elements of PTSD that they are dealing with – there isn’t a ‘one size fits all’ approach. People suffering from PTSD in Azerbaijan should call the 112 hotline to reach the expert help and advice they need. Additionally, in the spirit of international collaboration, countries with more significant expertise in dealing with such matters should assist those with little or no experience. Only by understanding this silent phenomenon fully can we create stable communities and societies and a sense of durable peace in the South-Caucasus.

The article The War Within: How Karabakh Conflict Continues To Haunt Those Who Witnessed It – OpEd appeared first on Eurasia Review.