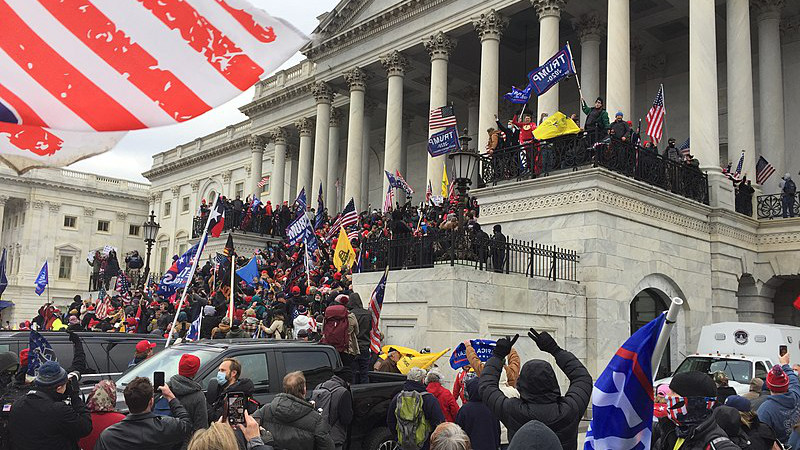 I have spent my entire career working to end conflicts, mostly overseas. Unfortunately, in light of this month’s insurrection and the ongoing threat of violence, my experience resolving election-related conflicts is increasingly relevant at home.

The striking images from January 6 reinforce the truth that we are not immune from the electoral violence we have seen elsewhere in the world.

Ahead of the uprising, the U.S. met several criteria that peacebuilders know increases the likelihood of election violence. This includes pay-to-pay politics, weak electoral management bodies, ongoing conflict and division in the country, repression of the opposition, and civil unrest and violence against protesters.

The U.S. meeting one of these criteria was concerning. Meeting two was alarming. Meeting all of them was irrefutable evidence we were heading towards violence.

The inauguration demonstrated a moment of hope. It feels to many that the clouds have lifted in the U.S and the threat of election violence is over. But those of us who work in peacebuilding know that we have a lot of work ahead to ensure this doesn’t happen again. If our leaders heed lessons from other countries who have faced similar unrest, we can optimize our chance for a continued peaceful transfer of power and a reckoning with the root causes of white supremacist violence that we saw in full display at the Capitol.

The truth is that, though it has been infrequent in the U.S., unfortunately election violence is not rare. The transfer of power is a vulnerable moment for any country where the risk of violence inherently increases. There are important lessons to be learned from countries that have weathered similar crises and come out on the other side.

If we don’t properly address the election violence — and its root causes — we’ll have a continued risk of instability and violence. The absolute worst-case scenario is the U.S. becoming a failed state, a reality that would have been inconceivable four years ago. But it is indisputable that we have been moving in the wrong direction over the past years.

A 2019 Fragile State Index (FSI) named the U.S. as one of the 20 “most worsened countries” two years in a row, citing indicators such as the Trump administration’s record on rights and rule of law in response to a refugee crisis. The administration’s incitement of violent insurrection and baseless accusations of election fraud will certainty further damage our standing.

Yet if we make smart, deliberate decisions moving forward, we can avoid becoming a failed state. Here’s what we know about how to restore stability and keep a country running after an attempted insurrection.

First, both sides must denounce the incumbent’s violent attempt to stay in power.

The nations that fare the best after election violence are those that have a bipartisan denouncement of the incumbent looking to stay in power. Following the Capitol attack, one of the most alarming signs was how many Republicans still voted against certifying President Biden’s election victory. This lack of bipartisanship — on virtually any issue — will prove to be a difficult hurdle to overcome but is absolutely necessary to address if we are to move forward.

When countries don’t have bipartisan condemnation after an attempted coup or acts of violence, countries can remain in protracted conflict or in a fragile state for years. Fractures in a community (whether ethnic or political) can further the dehumanization of the “other” and intensify existing divisions. This also undermines trust in democratic institutions and processes, including election integrity.

Division and conflict can continue to fester, normalizing violence. Research has found that previous incidences of pre-election violence are an accurate predictor of violence in later elections.

Research on election violence has also found that multi-party efforts to protect the integrity of democratic systems are critical to prevent future violence. In the U.S., we saw Republican governors, senators, and election officials cross party lines to affirm the election results, placing the integrity of our democracy over partisan politics. This is an important step towards de-escalation.

Second, there needs to be accountability for those who perpetrated violence.

Accountability can look different from country to country, but it is vital to building peace and restoring trust in government. When there is legal impunity given to supporters of the incumbent government where violence was committed, it can decrease political participation and trust in public institutions.

Following violence, there are a number of strategies to prevent additional violence and address social fragmentation. One is enhancing election management infrastructure. Another is establishing bi- or multi-party commissions designed to build national cohesion by addressing the conditions that enabled violence.

In the U.S. case, a bipartisan coalition or consortium will need to acknowledge the harms caused both by these attacks and by the country’s long history of violence and oppression — and then take action to remedy these harms.

The process of accountability has begun with investigations into what happened on January 6 and impeachment proceedings, which have support of Democrats and Republicans. This is important, but won’t be a cure-all to properly address the deep division and toxic political climate.

The U.S. needs to begin a process to better understand radicalized violence and address the cancer that is white nationalism. According to the Southern Poverty Law Center, there has been a 55 percent increase in white nationalist hate groups since Donald Trump took office. The unabated growth of this movement is deeply troubling, and it should not have taken an attack on the Capitol to finally take right-wing extremism seriously.

Around the globe, there are many success stories of community-based processes to unite countries following unrest. One example is Liberia’s, where community-led implementation of the recommendations of their Truth and Reconciliation Commission was an essential factor to their years of nationwide reconciliation and peace.

Our country has seen violence in the past in response to demands for civil and human rights. During previous violence periods in the United States, we have made progress through widespread nonviolent civil action/ grassroots organizing, community dialogues and courageous actions from faith and community leaders, policy makers, and politicians.

To address our deep divisions, President Biden should appoint a Cabinet level position, a Secretary of Peace, with the budget and authority to address our legacies of violence. This position should lead a Truth and Reconciliation Commission and develop specific policy recommendations that address the societal fragmentation that led to January 6, 2021 and beyond.

Following this appointment, we need government-led programs to modernize and strengthen our electoral management to rebuild public confidence in the process, such as by eliminating the Electoral College. Yet again, these reforms will only work if there is a multi-party coalition behind it — one that includes senators, members of Congress, governors, peacebuilders, and civil society leaders.

We also need training for media organizations in conflict-sensitive reporting to help reduce future election violence, as well as grassroots organizers who monitor and document political violence and intimidation.

A country that experiences post-election violence is not doomed to become a failed state. But it does need to proceed deliberately to end the conflict and overcome existing divisions. This is where the U.S. is today.

At this crossroads, we must call on leaders of both parties and all levels of government to pledge their support to peacebuilding, bridge the divisions in our country, and commit to strengthening our democratic institutions. We can find powerful examples from the international community for what works to promote national healing after tumult.

These teachings could help us start the process of ending this national nightmare and embarking on a new chapter, one where we regain a common sense of national purpose and live up to our democratic ideals.

A shorter version of this piece appeared at OtherWords.org.

The article Three Things The US Must Do To Prevent Future Election Violence – OpEd appeared first on Eurasia Review.