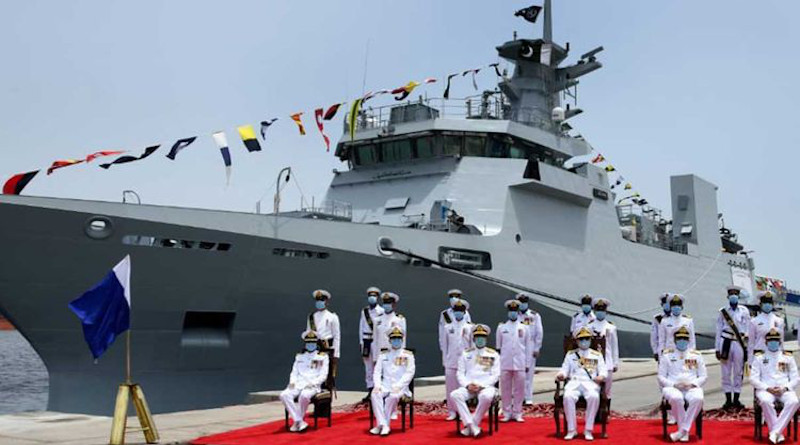 In a multipolar globalized World significance of global maritime commons has grown exponentially, so is the importance of sea power. With the global economic centre of gravity drifting towards Asia, states driven by their geo-economic concerns are vying for global ascendency in the Indo-Pacific Waters. Therefore, strengthening of their respective naval muscles seems nation-states’ utmost priority. It was manifested in the recent episode of naval power projection (against China’s rising sea capabilities) by Quad members-India, US, Australia and Japan in the Indian Ocean (IO). Their move communicated in loud and clear that Beijing’s growing maritime reach and ability shall be neutralized through collective response.1

Such geopolitical developments in the Indo-Pacific Waters are indeed a point of concern for smaller regional players. For, sabre-rattling by navies of the Quad members is likely to destabilize the regional security balance. Emerging scenario hints that states’ maritime threat perceptions have already transformed gradually. Save for environmental challenges, non-traditional maritime threats such as piracy and other transnational challenges have decreased considerably in recent years. Whereas ‘peer competition’ between or among rival nation-states has once again taken the lead in the maritime domain. This trend is likely to stay in IO waters in the following years. Thus, it may further stir regional maritime rivalries. Such volatile maritime domain demands extensive inter-navy collaboration between regional and extra regional players. For, this not only enhances interoperability at least among likeminded naval forces but also their professional expertise.

Against this backdrop, Pakistan Navy (PN) a smaller yet proactive regional player seems well cognizant of its responsibilities as evident in the multinational naval drill i.e. Aman-21, thatis likely to kickoff this week. It is one of PN’s many post-9/11 initiatives taken to take all stakeholders on board. The navy has been successfully hosting this biennial drill since 2007. The current one shall be seventh of its kind. These biennial series aim to improve joint coordination in maritime rescue missions and combating piracy, among other issues of common concern. This demonstrates PN’s resolve to remain updated and improve its efficiency in the face of rapidly changing maritime domain.

PN’s transnational approach is thus a glaring manifestation of naval diplomacy that shall contribute to Pakistan’s positive image in the global community as a peace-loving and responsible state.  Moreover, it also provides the participant states’ naval officers and maritime intelligentsia an opportunity to first-hand experience Pakistan’s culture and hospitality. Such activities are much needed to boost people to people interactions, thus, successfully, win battle of minds and hearts- a significant dimension of modern warfare.

The Aman-21– shall be 41 states naval drill including the host state, is productive and unique activity in several ways, it is likely participation of the Russian Navy that is considered most significant aspect of the drill. Russian Black Sea Fleet’s confirmation that it will take part in the event; is a taste of things to come. Russia’s likely move is perceived as a highly symbolic gesture in geopolitical circles. For, participation in the Aman-21 means that the Russian Naval forces will be exercising alongside NATO’s. This is exactly after a decade since the “Bold Monarch” exercises off the Spanish coast” that two forces will be exercising together (2). The developing scenario indicates dawn of a new era, unlike past, now, Pakistan’s defence and maritime interests are more inclined towards the Eastern bloc. However, it seems that the state has somewhat learned to maintain balance in its foreign policy vis-à-vis major powers.  Whereas, maritime interests of traditional rival-India are more in line with the Western bloc.

PN’s achievement of sea-based nuclear capability in 2017, somewhat ascertained Pakistan’s second strike capability.  However, given the Indian hegemonic regional designs and quest for blue water naval status it is predictable that traditional rivalry between the two states shall take its course and bring instability in the maritime domain. Subsequently, redux of Cold War in the South Asian Waters is likely.

However, old players have switched their sides as Washington and New Delhi are likely to stay on same page and ties between Moscow and Islamabad are expanding. Interestingly, new players i.e. Beijing have also joined the race. Rapidly unfolding geo-strategical shifts indicate that the maritime powerplay is likely to grow further in the following years. Therefore, Pakistan must review and improve its certain policies that are still overwhelmed with sea blindness.