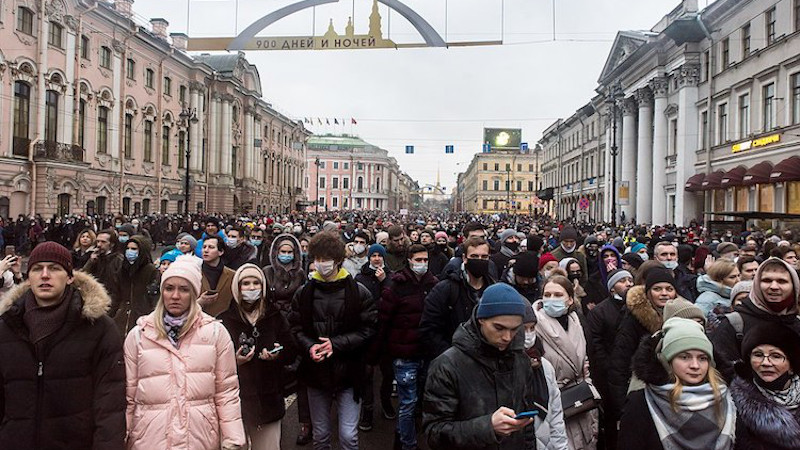 While Russia is currently investigating reasons behind the unsanctioned January 23 mass protest that took place in central Moscow and many other regions including the Far East, it has allegedly accused the United States of meddling in its domestic affairs.

According to human rights organisations, over 3,600 people were detained during the protest. Some have been charged with administrative violations, while others have been hit with criminal charges.

The Russian Foreign Ministry said it was analysing the activity of U.S. web platforms in the context of the demonstrations for possible signs of interference in Russia’s internal affairs.

“We’re conducting in-depth work regarding the involvement of U.S. web platforms in U.S. interference in our internal affairs. They know perfectly well what this is fraught with,” Foreign Ministry spokesperson Maria Zakharova said on Channel One Russia TV.

According to an official release posted to the website of the Foreign Ministry, “this is not the first time the U.S. embassy in Moscow has shown disregard for diplomatic rules and regulations by actively posting messages on social media in support of uncoordinated protests in Russian cities. In essence, we are talking about encouraging violent actions, hypocritically declared as a peaceful protest, in which the organisers cynically involve even minors.”

It said that the U.S. government needs to tackle its own problems, including overcoming the deep divisions in American society created by social injustice, inequality and the persecution of dissent. Attempts by American diplomacy, ignoring all decency, in fact, to incite radical elements are doomed to failure and will have negative consequences for bilateral relations, it warned.

Deputy chief of the opposition Yabloko party’s Moscow department Andrey Morev said that the main thing about the rallies was that they spread from the Far East to Kaliningrad, which shows that Russians “are clearly dissatisfied with the current state of affairs,” Kommersant newspaper reports. “So far, it’s a draw: the government is thinking about the ways to quell the protests, while civil society is licking its wounds, wondering about its next step.”

The opposition politician thinks that by the time of State Duma elections scheduled for no later than September 19, protests will surge, and the number of opposition supporters will rise.

As widely reported by the local media, the mass protests that engulfed Russia over the weekend were in support for the detention of Alexey Navalny, Russian opposition leader and the leading anti-Putin activist.

Navalny was hospitalised for about half a year at the civilian Charité hospital in Germany, recovering from an alleged poisoning that happened in Omsk, a Siberian city. Navalny was immediately picked upon arrival back home, placed in 30-day detention.  He is scheduled for a court hearing on February 2.

The unsanctioned rallies calling for the release of Navalny have not led to any political steps by the federal government so far.

Sources in the presidential administration told Kommersant that they see the rallies as “regular protest actions”, while the State Duma (lower house of parliament) plans to discuss the matter. Meanwhile, Navalny supporters have already announced plans for new rallies, promising to improve their coordination.

A source in the Kremlin told Kommersant that the number of people attending unauthorised rallies in support of Alexey Navalny was not that different from regular protest actions, so the reaction to them has been calm.

Another source familiar with the situation in Moscow told the newspaper that the capital had managed to fulfil the objective of maximum civility.

“In the first two hours, law enforcement did not touch citizens that did not violate public order. There were no serious injuries among those attending the rally, members of law enforcement looked for teenagers and parents with small children in the crowd so that they wouldn’t be trampled on or harmed,” according to the newspaper, quoting the source.

Besides, the rallies did not disturb the city’s public services. There were no incidents on public transportation or in city facilities, the source added.

Parliamentarians have also shown concern, drawing attention to the inadmissibility of the use of double standards. As for the problem of the detention of  Navalny, the Russian parliamentarians also expressed their position and agreed to discuss this issue thoroughly.

“Navalny and his supporters are skilfully exploiting the rightful discontent of the population, purposefully using it in an attempt to discredit the Russian leader,” he told Kommersant. “Their goal is to cause turmoil that will open up wide opportunities for anti-national forces within Russia and outside of it.”

Political analyst Mikhail Vinogradov told Kommersant that on the whole, the January 23 rallies were similar to the 2017 protests, marked by “considerable regional spread, powerful emotional outburst, flashy anti-government memes, and clashes with law enforcement. However, the protesters have no understanding on how to transform their emotional outburst into a political upshot, there is no strategy.”

A key feature of turbulent times in Russia would be a rift among the elite, but there are no signs of it now, the expert noted. However, we cannot say that the elites took consolidated or even well-thought-out action, he pointed out.

According to the source, these demonstrations do not require any specific reaction, like holding counter-rallies in support of the president or introducing tougher laws. During a video session with Russian students on January 25, Russian President Vladimir Putin stated that everyone has a right to express their point of view but should remain within the law.

“All people have the right to express their point of view within the legal framework. Everything that oversteps these boundaries is not just counterproductive but also dangerous,” Putin told the students.

Putin drew attention to the January events when the mob stormed the parliament in the United States. “What are they doing with these people?” he asked, recalling that the FBI vowed to find all those who participated in the siege and imprison them.

“Between 15 and 25 years [behind bars] for domestic terrorism. They came out with political slogans too, but it fell outside of the scope of law. Why should everything outside the legal framework be permitted in Russia?” he asked.

“Least of all should underage children be pushed to the front,” Putin continued, noting that “this is what terrorists do” when they “drive women and children ahead of them.” “The focus is a little shifted here, but essentially it is the same,” the president stressed.

He concluded that all citizens have the right to engage in politics, express their opinion and promote it in society but within the legal bounds.

“Law enforcement agencies should act within the scope of the law as well. They also should serve the Russian people and the state but also in the framework of their duties and law,” Putin underlined and expressed the hope that the country would be able to move forward in this way.

“Nobody should resort to them [unauthorised rallies] trying to protect their ambitious goals and tasks, especially in politics. That’s not the way politics is done, at least if it is responsible,” Putin stressed during the interaction with the students from higher education institutions of Kazan, Samara, Smolensk, Ufa, Crimea, Novosibirsk, Nizhny Novgorod and Saransk.