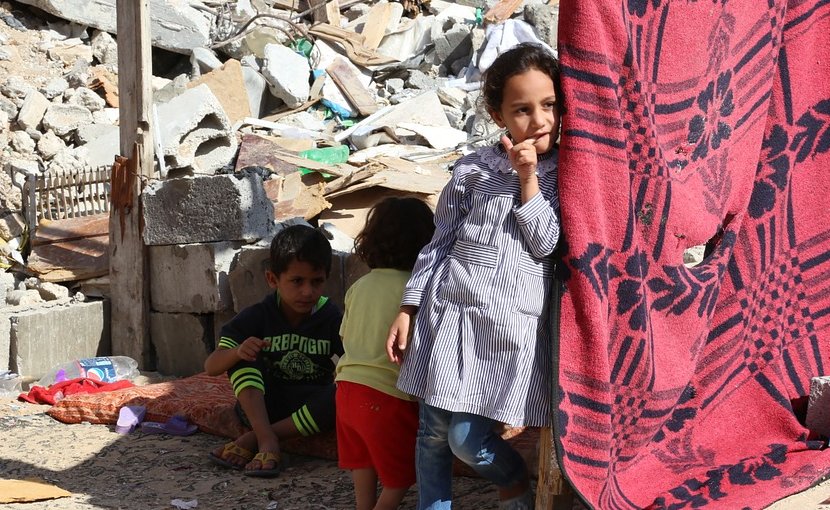 On 21 January, 2021, a six-year-old Palestinian boy and his three-year-old brother were wounded after a group of masked Israelis attacked their family’s car outside the occupied West Bank city of Ramallah. While the six-year old boy sustained injuries to his face after being hit with a rock, his younger brother was cut by broken glass.

Alaa Sawfta, the father of the injured boys, told Middle East Eye that he believes the attack on his family was not a coincidence, but part of a “coordinated effort from settlers in the West Bank against Palestinians,” adding: “We have been seeing attacks like these happening almost every day in the past few weeks.”

Hani Nassar, a field researcher for Defense for Children International – Palestine (DCIP), says: “If you look at the attacks from Israeli settlers from the end of 2020 to the beginning of 2021, there is a steep increase in the number of attacks”. “It is also very clear that the attacks are being organised and coordinated, not just among the settlers, but with the soldiers as well.”

The attacks against Palestinian children can’t be understood apart from the colonial context formed by Zionism. Every single detail of existence passes through prism of Israeli settler colonialism – coming out as mutilated beyond imagination.

The United Nations Children’s Fund (UNICEF) State of Palestine Humanitarian Situation Report, End of Year 2020 reveals the abject misery in which Palestinian children dwell. More than one million children have limited access to essential services and at least 500,000 children have restricted access to safe and clean drinking water.

The Israeli permit system, the bureaucratic system of movement restrictions in the West Bank and the blockade of the Gaza Strip pose serious challenges to accessing healthcare services. Over 2,000 medical permit applications are submitted monthly (33% children), a third of whom are cancer patients seeking medical treatment in the West Bank or in Israel.

The intermittent closure of educational institutions due to the COVID-19 pandemic has resulted in a shift to distance learning programmes and platforms. However, in the Gaza Strip, more than 575,000 children and teenagers (over 50% of the school aged population) lack access to computer equipment, a reliable power supply and the internet. Additionally, it is estimated that only 30% of households in the Gaza Strip have internet, and these internet connections are often unreliable.

Settler colonialism is not easy system to live under. It is a carefully organized architecture of barefaced barbarism, intended to psychologically torture the colonized.

As a result of decades of Israeli attacks and violence against Palestinian populations, Post-Traumatic Stress Disorder (PTSD) is common among children. One study shows that 88.4% of children and adolescents in Gaza have experienced trauma in their life, while 53.5% suffered from PTSD. According to Al Mezan Centre for Human rights, Israel’s ongoing 13-year-long siege on Gaza and its de-development policies have resulted in high unemployment rates, food insecurity and poverty.  This has had a severe mental health impact on the Gazan population. At least 16 suicide cases were reported in Gaza in 2020.

The Defense for Children International-Palestine (DCIP) has published a post reviewing violations against Palestinian children in 2020. The organization has documented 79 Palestinian child detention cases from the West Bank.

85% said they were physically abused by Israeli forces during the course of their detention; every child detainee had their hands bound; 68% had their legs shackled, and 91% were blindfolded; 57% were arrested from their homes at night and 76% were not told why they were being detained. In the same year, nine children were killed by Israeli forces, all of them boys aged between 14 and 17, including seven from the West Bank and two from the Gaza Strip.

To brutally dehumanize Palestinian children, Israeli airstrikes struck areas in the north, east, and west of Gaza on 25 December, 2020 – the day of Christmas. Bombing during a festival sends a chillingly cruel message – the humanity of Palestinians does not matter. Their existence is inseparably intermeshed in a web of savagery.

The Israeli attacks damaged the Gaza Center for People with Disabilities, the Shuhada Gaza School, and the Mohammad Al-Dura Children’s Hospital, all located in the At-Tuffah neighborhood. The targeting of civilian infrastructure is not an aberration in an otherwise honorable history of the Israeli military. Rather, it is a well-thought-out tactic used to increase the suffering of Palestinians.

To take an example, in the course of “Operation Cast Lead” – a 22-day war launched on Gaza in 2008 – Israel destroyed or damaged 58,000 homes, 280 schools and kindergartens, 1,500 factories and workshops, several buildings housing Palestinian and foreign, electrical, water, and sewage installations (more than one million Gazans were left without power during the invasion and a half million were cut off from running water), 190 greenhouse complexes, 80% of agricultural crops, and nearly one-fifth of cultivated land.

In the documentary Children of Fire, Fadi, aged 5, says: “Every day when I come home from school, I wash my hands and have lunch. I wash my plate and do my homework. Then I go out and throw stones.” The insertion of resistance into the regular routine of life captures the fiery sentiments of Palestinian children – they are not afraid to resist the occupation.

The act of resistance is heroic because it is faced by powerful forces of brutality that have forgotten to feel for humanity. Palestinian children have to stand and watch their homes being destroyed; they have to witness their mothers and sisters being insulted, their brothers being beaten, and their fathers being degraded and, on some occasions, killed. There are some experiences that go beyond human tolerance.

Take this story from Rafah Refugee Camp in Gaza: “both parents are arrested, the house is demolished and the very young children move into a small tent with their crippled grandmother. Repeated attacks by soldiers over the following weeks force them to leave the tent and wander from one shelter to another…Then the children’s mother is released from prison … She is not recognised by the youngest child.”

Rebelling against one of the most lethal armies and intelligence forces in the world is a task performed only by those who are steadfast in their belief in constant struggle. However much Zionists try, they cannot break this infinite faith in human capacity – stone-wielding children will always rise up in fearless rebellion.