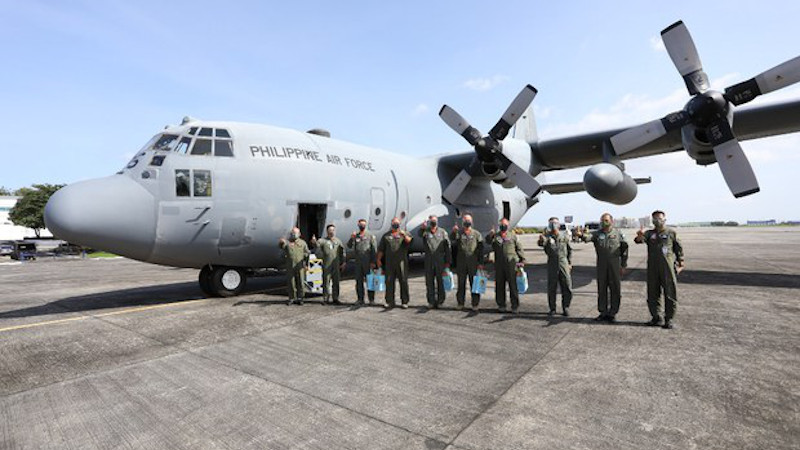 The United States is a “stabilizing force” in the disputed South China Sea and the Indo-Pacific region, the Philippine defense chief said Friday, adding that Manila was optimistic about a “new era” of ties with Washington under the Biden presidency.

Manila likely will keep pursuing an independent foreign policy, but is also expected to prolong a decades-old friendly relationship with the U.S. through dealings with the new administration in Washington, Defense Secretary Delfin Lorenzana said.

“As for our challenges ahead, the longstanding rivalry between the United States and China will surely continue to test our adeptness in balancing our relations with both countries,” Lorenzana told a forum organized by the Foreign Correspondents Association of the Philippines (FOCAP).

“On one hand, it is necessary for us to continuously engage with China, not only for our existing cooperation in various areas, but also for the peaceful resolution of our competing claims in the South China Sea,” he said. “On the other hand, we are mindful of the role of the United States as a stabilizing force in the Indo-Pacific region and a counter-balance to China.”

Beijing has laid claim to most of the South China Sea using its so-called Nine-Dash Line, which the American government has struck down as frivolous.

Six other Asian governments – Brunei, Indonesia, Malaysia, the Philippines, Taiwan and Vietnam – have territorial claims or maritime boundaries that overlap with China. While Indonesia does not regard itself as party to the South China Sea dispute, Beijing claims historic rights to parts of the waterway that overlap with Indonesia’s exclusive economic zone.

Lorenzana said he was hoping to forge stronger military ties with the U.S. under the administration of President Joe Biden, who took office on Jan. 20.

“The year 2021 promises to start a new era for the U.S.-Philippines relations under a new U.S. president who seeks to reclaim America’s status as a world leader,” Lorenzana said. “Being one of America’s allies in the Indo-Asia Pacific region, the Philippines may benefit from the Bidden administration’s anticipated ‘pivot to Asia’ strategy.”

He said the Philippines welcomed “with great optimism the change in leadership in the U.S. government.

“After all, the decades-old alliance has endured multiple changes of administrations on both sides amid numerous challenges in the relationship,” he said.

Upon taking office in 2016, Philippine President Rodrigo Duterte signaled a shift in foreign policy away from traditional ally Washington and in favor of its rival, China. He made it a priority to appease Beijing even after an international arbitral tribunal ruled that year in Manila’s favor regarding the South China Sea.

In late 2020, Duterte changed course at an international forum, calling out China over its legal obligations to the Philippines in the waterway.

On Friday, Lorenzana said he expected the appointment of Sung Kim, as acting assistant secretary of state for East Asian and Pacific Affairs, would give Washington a “deeper understanding” of the Philippines. Kim previously served as the U.S. ambassador in Manila.

“We are hopeful that prudence and proper restraint will be exercised in dealing with other countries’ domestic affairs,” Lorenzana said, noting that the Philippines-U.S. alliance was rooted in its shared democratic commitments.

The defense secretary made his remarks a week after China passed a law that allows its coast guard to use force and fire upon ships in waters Beijing considers part of its territory. That move led to a diplomatic protest by the Philippine Department of Foreign Affairs this week.

A day after China passed the law, a U.S. aircraft carrier strike group deployed to the South China Sea, drawing a response from Beijing.

On Jan. 25, Chinese Foreign Ministry Spokesman Zhao Lijian said “it does no good to regional peace and stability for the United States to frequently send military vessels and aircraft to the South China Sea to show off muscles.”

During the Friday forum, the Philippine envoy to the United States said Manila had received assurances from new U.S. Secretary of State Antony Blinken.

Ambassador Jose Manuel Romualdez said Blinken noted that “the U.S. will stand with claimant countries and reiterated the previous administration’s stance as far as China’s maritime claims are concerned.”

During his first day on the job as America’s top diplomat, Blinken had a phone conversation with Foreign Secretary Teodoro Locsin Jr. on Wednesday where they reaffirmed their commitment to the alliance.

“He also underscored that the Mutual Defense Treaty will apply to armed attacks against the Philippines,” Romualdez said, referring to Blinken. “We welcome this continuation of the U.S.’s strengthened policy as regard to the South China Sea.”

Both secretaries agreed that “a strong U.S.-Philippine alliance is vital to a free and open Indo-Pacific region,” even as Blinken stressed the importance of the Mutual Defense Treaty “for the security of both nations, and it’s clear application to armed attacks against the Philippine armed forces, public vessels, or aircraft in the Pacific, which includes the South China Sea.”

In a statement, U.S. Department of State spokesman Ned Price said Blinken reiterated the position of the United States that Beijing had exceeded the maritime zones that China is permitted to claim as reflected in the 1982 United Nations Convention on the Law of Sea.

Marielle Lucenio and Jojo Rinoza contributed to this report from Manila.