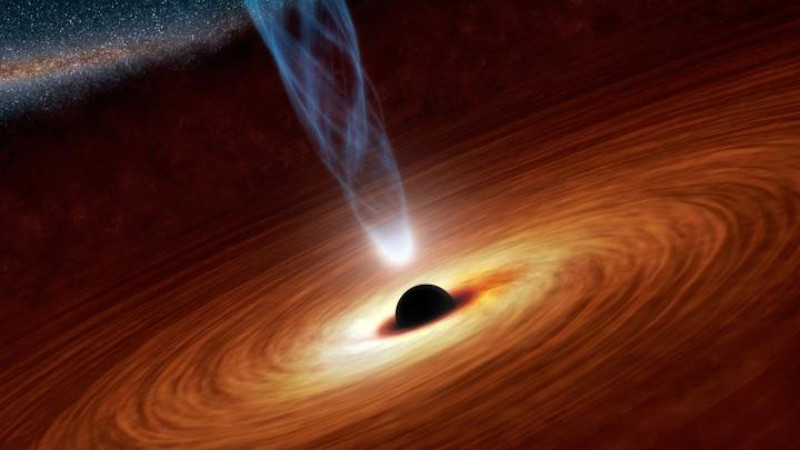 Black holes are considered amongst the most mysterious objects in the universe. Part of their intrigue arises from the fact that they are actually amongst the simplest solutions to Einstein’s field equations of general relativity. In fact, black holes can be fully characterized by only three physical quantities: their mass, spin and charge. Since they have no additional “hairy” attributes to distinguish them, black holes are said to have “no hair”: Black holes of the same mass, spin, and charge are exactly identical to each other.

Dr. Lior Burko of Theiss Research in collaboration with Professor Gaurav Khanna of the University of Massachusetts Dartmouth and the University of Rhode Island alongside his former student Dr. Subir Sabharwal discovered that a special kind of black hole violates black hole uniqueness, the so-called “no hair” theorem.

Specifically, the team studied extremal black holes — holes that are “saturated” with the maximum charge or spin they can possibly carry. They found that there is a quantity that can be constructed from the spacetime curvature at the black hole horizon that is conserved, and measurable by a distant observer. Since this quantity depends on how the black hole was formed, and not just on the three classical attributes, it violates black hole uniqueness.

This quantity constitutes “gravitational hair” and potentially measurable by recent and upcoming gravitational wave observatories like LIGO and LISA. The structure of this new hair follows the development of a similar quantity that was found by Angelopoulos, Aretakis, and Gajic in the context of a simpler “toy” model using a scalar field and spherical black holes, and extends it to gravitational perturbations of rotating ones.

“This new result is surprising,” said Burko, “because the black hole uniqueness theorems are well established, and in particular their extension to extreme black holes. There has to be an assumption of the theorems that is not satisfied, to explain how the theorems do not apply in this case.”

Indeed, the team followed on previous work by Aretakis, that found that even though external perturbations of extreme black holes decay as they do also for regular black holes, along the event horizon certain perturbation fields evolve in time indefinitely.

“The uniqueness theorems assume time independence. But the Aretakis phenomenon explicitly violates time independence along the event horizon. This is the loophole through which the hair can pop out and be combed at a great distance by a gravitational wave observatory,” said Burko.

Unlike other work that found hair in black hole scalarization, Burko noted that “in this work we were working with the vacuum Einstein theory, without additional dynamical fields that modify the theory and which may violate the Strong Equivalence Principle.”

The team used very intensive numerical simulations to generate their results. The simulations involved using dozens of the highest-end Nvidia graphics-processing-units (GPUs) with over 5,000 cores each, in parallel.

“Each of these GPUs can perform as many as 7 trillion calculations per second; however, even with such computational capacity the simulations look many weeks to complete,” said Khanna.

The article Extreme Black Holes Have Hair That Can Be Combed appeared first on Eurasia Review.