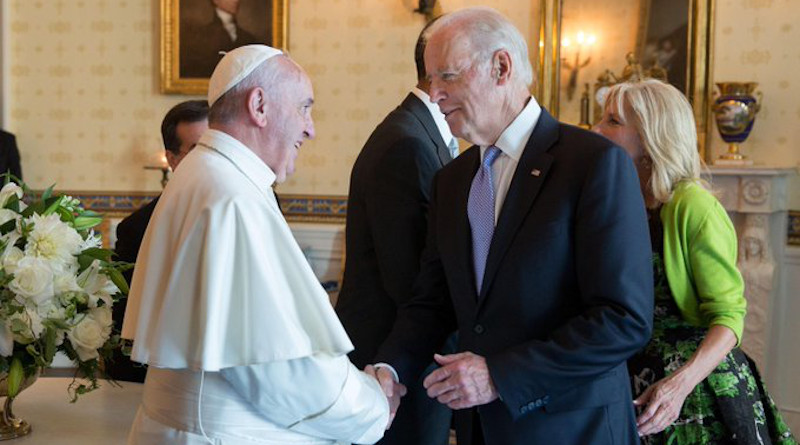 On November 12, Pope Francis called President-elect Joe Biden to congratulate him on his electoral victory. He surely thought that the incoming president would make Catholics proud to have one of their own in the White House. One wonders what the Holy Father now thinks of Biden.

On January 28, the White House announced that Biden will issue an executive order that rescinds the Mexico City Policy, the rule that bars U.S. foreign aid to international non-profit organizations that provide for abortion or abortion counseling. This policy was first implemented by President Ronald Reagan in 1984 and has been revoked or reinstated by Democratic and Republican administrations, respectively, since that time.

Biden will also ask the Department of Health and Human Services to begin the process of rescinding the Trump administration’s Title X family planning rule; among other things, it denies funds to Planned Parenthood and other abortion mills.

This is not the first time that Biden has departed from Church teachings on life. On January 22, the 48th anniversary of the Supreme Court’s decision to legalize abortion, Biden and Vice President Kamala Harris heralded the ruling, saying they were “committed to codifying Roe v. Wade.”

In response, Kansas City Archbishop Joseph Naumann, chairman of the U.S. Conference of Catholic Bishops Committee (USCCB) on Pro-Life Activities, said, “It is deeply disturbing and tragic that any President would praise and commit to codifying a Supreme Court ruling that denies unborn children their most basic human and civil right, the right to life, under the euphemistic disguise of health services.”

Biden has a real problem with the most basic moral teachings of his professed religion.

On January 20th, his first day in office, Biden issued an executive order allowing males who claim to be female the right to compete with females in high school and college sports; they can also use the same shower facilities.

The chairman of five bishops’ committees, led by Cardinal Timothy Dolan, chairman of the USCCB’s Committee on Religious Liberty, responded by saying this decision “threatens to infringe the rights of people who recognize the truth of sexual differences or who uphold the institution of lifelong marriage between one man and one woman.”

A few days later, Biden issued an executive order repealing President Trump’s ban on transgender persons from serving in the military. He provided no evidence that women who claim to be male will have no effect on real men in their living arrangements and daily operations.

According to Pope Francis, Biden’s policies on transgender persons are not simply in violation of Church teachings—they are the work of Satan. “Gender ideology is demonic!” The pope made that remark to emphasize that gender theory fails to recognize “the order of creation.” Indeed, he even went so far as to say that “gender ideology” was reminiscent of “the educational policies of Hitler.”

Biden’s choice of January 28 to announce his pro-abortion executive orders makes him look like a rogue Catholic. This day marks the National Prayer Vigil for Life. This USCCB event will take place at the Basilica of the National Shrine of the Immaculate Conception in Washington, DC.

On Biden’s first day in office, White House press secretary Jen Psaki was asked by a reporter for EWTN about the president’s plans to overturn the pro-life policies of his predecessor. “I will take the opportunity to remind all of you that he is a devout Catholic.”

Looks like this “devout Catholic” has no problem stiffing the pope.