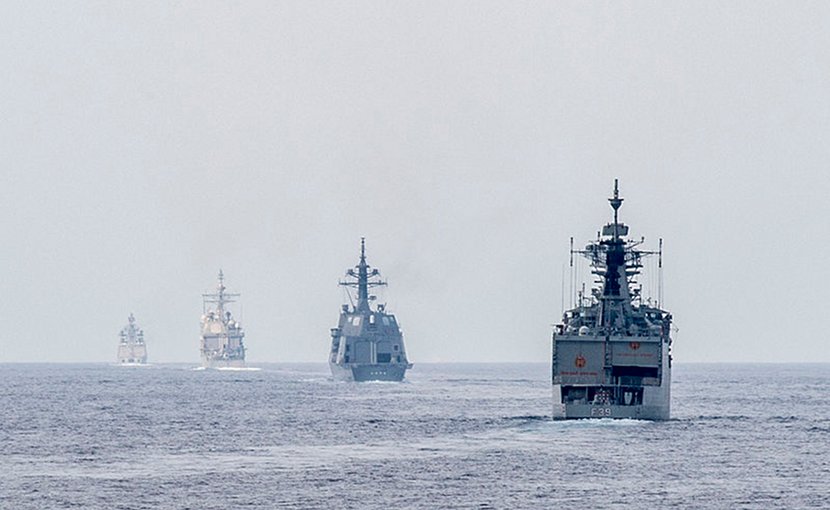 Small nations, which are situated in strategically important places, have the unenviable task of managing Big Power rivalries. On the one hand, their geographical positioning is a boon because world powers seek their goodwill and could shower some  benefits. But on the other hand, the location makes them vulnerable to military action or dubious blandishments which have the potential to abridge their sovereignty, even to the point of extinction.

These concerns were succinctly stated by the Sri Lankan Foreign Secretary and former Navy Commander Adm.Prof.Jayanath Colombage at a recent Pathfinder Indian Ocean Security Webinar with a galaxy of internal security experts participating.

The former navy chief regretted the militarization of the Indian Ocean Region (IOR) and the deleterious impact of securitization and militarization on the economies of the littoral States, especially the  economies of small States. The latter lack human, material and financial resources for development and need fruitful connections with the world through the oceans.

Colombage asked in deep anguish: “Shouldn’t we be focusing of economic and social development and achieving Sustainable Development Goals by the target year of 2030?” He then went on to point out that the Asian Development Bank had estimated that the infrastructure needs of Asia and the Pacific would exceed US$ 22.6 trillion through 2030. If the required funds are not provided, there would be difficulty in achieving sustainable development goals, he warned.

“We can witness a slowing down of economies and socio-economic tensions. Human emotions could rise high and create fear and insecurity. This also results in extreme forms of nationalism. There is, and there will be, interruptions to Global Supply Chains,” he said.

Although the IOR has historically been important, there are now two new factors of gigantic importance, he points out. Firstly, there is the Indo- Pacific Strategy of the US, India, Japan and Australia, called the Quad. Secondly, there is China’s Belt and Road Initiative (BRI). The Quad is essentially defense and security-oriented, and the BRI is essentially economic, based on trade, infrastructure development and investment.

However, the US and its allies propagate the notion that the BRI’s development work is but a fig leaf to cover China’s security agenda and is a thinly veiled effort to enslave recipient countries by trapping them in unmanageable debt.

Stating Sri Lanka’s case, Colombage says that it wishes to have a free and open Indian Ocean with a rules-based maritime order to carry out  maritime commerce, the development of maritime related infrastructure and establish connections to the global supply chain across the oceans. However, the development agenda has taken a backseat and the IOR has become an arena for strategic competition between the Big Powers, he bemoans.

“I like to call it a competition for RMB – Resources, Markets and (military) Bases. More and more governments, organizations and institutions worldwide are making the Indo-Pacific their conceptual frame of reference and thus the basis of their policies. However, they differ in terms of their objectives and emphasis on different policy fields,” Colombage notes.

The Quad’s resolve to dominate Indo-Pacific high seas is being questioned, he points out. The Quad is portraying itself as the principle driver of Indian Ocean maritime security. But Colombage wonders if the Quad is preparing for a “Cool War” ( a 21st.Century version of the 20 th.Century of the “Cold War”) behind the smokescreen of a laudable concern for free and unfettered navigation. Colombage contends that no single country can be the net-security provider in the IOR. He observes that the insecurity of one country is leading to insecurity of others.  Because insecurities play such a dominant role in devising nations’ strategies that the IOR is characterized by increasing military/naval activity.

“It (the IOR) is one of the most militarized oceans in the world. For example, from 2008 to 2020, 575 warships from 29 different countries had visited Sri Lanka,” Colombage points out.

The IOR is characterized by a “huge mistrust and trust deficiency.” South Asia is militarily, politically and economically, a dynamic region but it sorely lacks a security consensus and regional interdependence which is the bedrock of a security consensus. There is also strategic ambiguity. On top of it all, the IOR is also a nuclearized region with two nuclear powers, India and Pakistan, having had violent confrontations several times in the last 72 years.

The impact of geographic proximity to large nuclear powers is greatly felt in smaller countries such as Sri Lanka, the former naval chief says.   The security of an innocent small State could be gravely affected as a consequence of someone else’s war, Colombage points out.

According to the Lankan Foreign Secretary, the in the present context, the most important question to ask is: What is the purpose of free and open navigation? Is it for waging war and jockeying for power in the IOR or is it for a free flow of trade, investment, development and cooperation?

Stating Sri Lanka’s position on this matter, Colombage says: “We do believe that we need a rules-based order, as the survival of the State is most important for Sri Lanka. A rule-based order is one way to overcome problems of asymmetry. Sri Lanka is a small State and does not have any hegemonic intentions. We believe in Multilateralism and not in Unilateralism and do not like to see securitization of maritime trade and development.”

“Conversely, we wish to see a balance of power and not hegemonic power. We also would like to convey that Sri Lanka is not a piece of ‘Real Estate’ (to be parceled out among rival powers). Please respect Sri Lanka’s national interests.”

Colombage proposes a five-point program to sustain the independence of small States:

“In order to overcome being caught in the great power rivalry in the Indian Ocean, Sri Lanka has five pillars to its foreign policy. One is Neutrality. Technically, we are a non-aligned country, but we wish to remain neutral, at the same time maintaining friendly relations with everyone, which is number two. The third is not to get caught in major power games. We do not like to ‘hedge’ or ‘choose’ between States or jump on to one or the other of the bandwagons. We need to maintain strategic autonomy in the Indian Ocean. The fourth point is that Sri Lanka will not cede control of its strategic assets to foreign concerns. Investment, according to Sri Lanka’s vision articulated in President Gotabaya Rajapaksa’s ‘Vistas of Prosperity and Splendor’, should be in FDIs and joint ventures. But they should not lead to take overs. The Fifth point is, Sri Lanka does not want to be a strategic security concern to India, especially in maritime and air domains.”