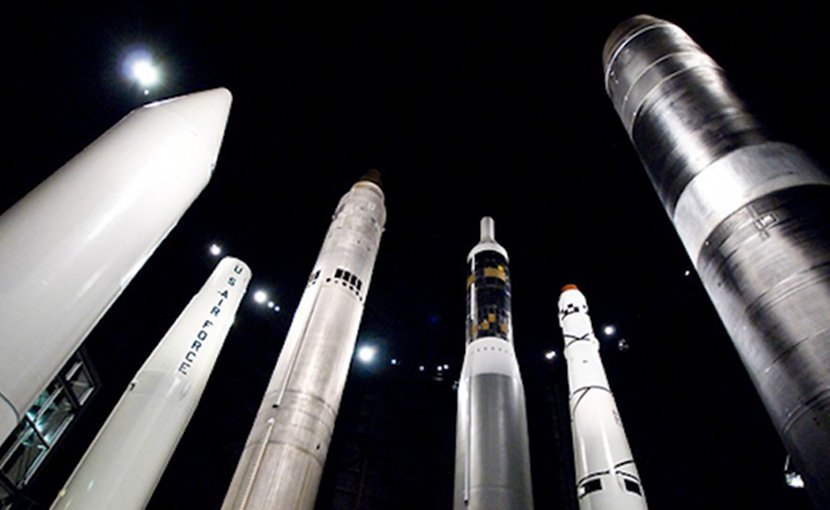 As the day broke today, 22 January 2021, a new era dawned in which nuclear weapons now are prohibited – finally banned – 75 years after the invention and use of nuclear weapons.

The Treaty on the Prohibition of Nuclear Weapons (TPNW), commonly known as the Nuclear Ban Treaty, entered into force today – 90 days having elapsed since 24 October 2020, when Honduras became the 50th country to ratify the treaty.

The UN Nuclear Ban Treaty was negotiated in 2017 in New York and adopted by 122 peace loving Member States of the United Nations – a clear majority that rejected nuclear weapons and the illusory yet dangerous concept of nuclear deterrence.

The TPNW finally realizes the vision of the very first Resolution I/1 adopted on 24 January 1946 by the UN General Assembly that called for the elimination of nuclear and other weapons of mass destruction.

This treaty at long last completes the prohibition of all three types of weapons of mass destruction – biological weapons (BTWC) were banned in 1975, chemical weapons (CWC) in 1997 and now finally nuclear weapons in 2021.

Under the Nuclear Ban Treaty, there comes into force a total permanent prohibition on the development, testing, possession, stationing, threat of use and use of nuclear weapons, and creates the norm and international law banning nuclear weapons.

Between them, these misguided countries have an unimaginable 13,500 nuclear weapons that are deployed at more than 100 locations in 14 countries. In addition to the nine nuclear-armed States, five non-nuclear weapon States host nearly 200 US nuclear weapons on their territories – Belgium, Germany, Italy, Netherlands and Turkey.

All States parties shall accept full-scope safeguards, that is verification, implemented by the International Atomic Energy Agency (IAEA) to ensure that all nuclear activities carried out by them are exclusively for peaceful purposes and that there are no undeclared or secret nuclear activities that could lead to a nuclear weapon.

Contrary to the fake criticism levied against the Nuclear Ban Treaty that it weakens the current IAEA nuclear verification standard by not including the Additional Protocol (AP) to safeguards agreements; the truth of the matter is that States already implementing the AP are required to continue doing so, but the States renouncing nuclear weapons are required to implement full-scope comprehensive IAEA safeguards – which is not currently the case. The Additional Protocol, while highly desirable, has not been made mandatory by the IAEA but once concluded becomes the verification standard for the State which has signed and is implementing it.

The TPNW commits States to render assistance to those affected by the more than 2,050 nuclear test explosions conducted between 1945 and 2017 in all environments – on the Earth’s surface, underwater, underground, in the atmosphere and in space;  and to the succeeding generations of those affected by the use of nuclear weapons (in 1945).

In effect, the Nuclear Ban Treaty is regarded by its supporters as constituting an “effective measure” to achieve nuclear disarmament in parallel with the nuclear Non-Proliferation Treaty (NPT), the Comprehensive Nuclear-Test-Ban Treaty (CTBT), and a future treaty prohibiting production of nuclear material for weapons (FMCT).

The Nuclear Ban Treaty complements the NPT, the CTBT and the nuclear-weapon-free zone (NWFZ) treaties of Latin America and the Caribbean, the South Pacific, Southeast Asia, Africa and Central Asia that cover more than 110 countries.

Again, contrary to the ill-founded criticism that the Nuclear Ban Treaty undermines the nuclear Non-Proliferation Treaty and can lead to “treaty roulette”; the logic is inescapable that if NWFZ treaties have been affirmed by nuclear-weapon States and their defence allies as complementing the NPT, then the TPNW also complements the NPT and does not in any way contradict or compete with it.

Furthermore, the TPNW fulfils the commitments agreed by all NPT States, in particular in 2000 and 2010, to achieve the elimination of all nuclear weapons as required by Article VI of the NPT.

Thus, in effect, the Nuclear Ban Treaty in prohibiting and outlawing nuclear weapons delegitimizes and stigmatizes the possession of such weapons. In 2019, His Holiness Pope Francis declared possession and use of nuclear weapons as immoral.

As I have noted last October, one central principle of international law is “pacta sunt servanda”—pacts or treaties must be respected—as provided for under the Vienna Convention on the Law of Treaties (VCLT).

A recent study by the Norwegian Academy of International Law concluded that “the fact that the nuclear-armed States feel obliged to denounce the existence of a customary norm against the use and possession of nuclear weapons is, if nothing else, a testament to the relevance of the TPNW. It would have been pointless to declare the non-existence of such a customary norm if it were obvious to everyone that the TPNW could not have an impact on how states interpret the legality of nuclear weapons”.

The antecedents of the Nuclear Ban Treaty can be traced from General Assembly Resolution I/1 through succeeding resolutions; the NPT and agreed outcomes of its review conferences of 1995, 2000 and 2010; the NWFZ treaties; the CTBT; and the international conferences on the catastrophic humanitarian consequences of use of nuclear weapons (Oslo 2013, Nayarit 2014 and Vienna 2014); to the 2017 conference on the negotiation of the TPNW.

Thus, coming full circle in endorsing in a multilateral treaty – the TPNW – the complete elimination of nuclear weapons as the only way to guarantee that nuclear weapons are never used again under any circumstances.

And, recognizing in the TPNW that the continued existence of nuclear weapons, any nuclear-weapon detonation by accident, miscalculation or design, adversely affects the security of all humanity; all States share the common responsibility to prevent any use of nuclear weapons.

Lest we forget, it was the Biden-Obama team that denounced the international conferences on the catastrophic humanitarian consequences on use of nuclear weapons, referred to above and started the practice of hurling invectives and abuse against the Nuclear Ban Treaty supporters at the (failed) 2015 NPT review conference.

The invectives and abuse only worsened under the Trump regime at the preparatory committee sessions in 2017, 2018 and 2019 for the 2020 NPT review conference. In fact, the crazies of the Trump regime lost no opportunity to make unhinged comments and engage in outright bullying to the extent of demanding that States that had signed the TPNW should “unsign” it. Their departure is good riddance to a menace.

The US is not alone in demonizing the TPNW; the Russian Federation has denounced the Treaty in strong terms as have France and the UK. India and Pakistan too, in copycat statements, do not accept the TPNW.

As I cautioned in mid-December last year, unrealistic hopes are being advanced regarding expectations of the new Biden team in office. In his inaugural speech on 20 January, President Joe Biden could bring himself to make only the following comment regarding international affairs, “We will repair our alliances and engage with the world once again. Not to meet yesterday’s challenges, but today’s and tomorrow’s challenges”.

The recent testimonies and comments by Anthony Blinken (Secretary of State nominee) and Jake Sullivan (National Security Advisor nominee) came up short on nuclear arms control and disarmament and failed to offer to engage with TPNW supporters – mercifully though they refrained from asinine verbal attacks, a small blessing. A litmus test of the Biden administration’s commitment to return to multilateralism would be to engage in a civil manner with supporters of the Nuclear Ban Treaty, encourage the NATO allies to do the same, and find ways of reducing reliance on nuclear weapons.

Let there be no mistake, the election of Joe Biden, as president of the United States, is a much welcome development and expectations are running high of the new administration reversing some of the worst excesses of the Trump administration such as returning to climate change accords and the World Health Organization, reverting to multilateralism albeit with the traditional US “benign” hegemonic role, and re-engaging in diplomacy, among other expected welcome moves.

It is reported that the Biden administration has decided to renew the New START treaty for five years, limiting Russian and US “deployed” nuclear warheads to 1,550 each, before it expires on 5 February 2021. This obviously is a good sign that the US supports nuclear arms control. Russia has welcomed this announcement and has said it is waiting for a concrete proposal from the US. After the extension of New START, the US and Russia should immediately begin negotiations on a follow-on bilateral nuclear arms control treaty that covers all types of warheads and associated delivery systems, along with proper not notional counting rules for warheads as in New START.

Another good sign would be for the Biden team to cancel and wind up the Trump regime’s ill-conceived so-called “Creating an Environment for Nuclear Disarmament (CEND)”, as it is a distraction from real nuclear arms reductions, described by me as “dreaming of rainbows, butterflies and unicorns and of sprinkling pixie dust to miraculously come up nuclear disarmament solutions” through a selective group of about 43 including some “captive nations” along with reluctant and/or powerless others and some defiant nuclear-armed States. Instead, the US should reaffirm together with Russia, the Gorbachev-Reagan understanding of December 1987 that a “nuclear war cannot be won, and must never be fought”.

The Nuclear Ban Treaty formally recognizes that the catastrophic consequences of nuclear weapons: cannot be adequately addressed; transcend national borders; pose grave implications for human survival, the environment, socioeconomic development, the global economy, food security and the health of current and future generations; and have a disproportionate impact on women and girls, including as a result of ionizing radiation.

While in recent years, the attention of the international community has been forced to reckon with the deleterious consequences of climate change already manifested and expected in coming years; the consequences of a nuclear war or even the use of one or a few nuclear weapons would be exponentially more dire.

Civil society around the world, especially the long suffering and struggle of the hibakusha and those affected by nuclear testing and their families and their succeeding generations, as well as the International Committee of the Red Cross (ICRC), physicians, scientists, youth, academics and others, all played a key role over many years to finally help create the momentum that led to the Nuclear Ban Treaty. On their collective behalf, the 2017 Nobel Peace Prize was awarded to the International Campaign to Ban Nuclear Weapons (ICAN).

An international order anchored in legal norms and treaties offers the best hopes for survival. In this regard the Treaty on the Prohibition of Nuclear Weapons establishes a “right to nuclear peace” and stops nuclear weapons becoming a “perpetual menace”.

It is earnestly hoped by the majority of the world’s peoples that the mindless servitude at the altar of nuclear deterrence and opposition to the TPNW, by the countries possessing and relying on nuclear weapons, in particular NATO, is replaced by heeding the plaintive call below of a hibakusha and of the Bertrand Russell-Albert Einstein Manifesto to remember our humanity.

Setsuko Thurlow, a survivor of the atomic bombing of Hiroshima, speaking in Oslo on 10 December 2017, at the Nobel Peace Prize award ceremony, very clearly issued a call that can no longer be ignored:

The development of nuclear weapons signifies not a country’s elevation to greatness, but its descent to the darkest depths of depravity. These weapons are not a necessary evil; they are the ultimate evil.

All responsible leaders will sign this treaty [TPNW]. And history will judge harshly those who reject it.

To every president and prime minister of every nation of the world, I beseech you: Join this treaty [TPNW]; forever eradicate the threat of nuclear annihilation.”

*The writer is the former Head of Verification and Security Policy at the International Atomic Energy Agency and was a member of the Group of Eminent Persons for Substantive Advancement of Nuclear Disarmament established by the Minister of Foreign Affairs of Japan.