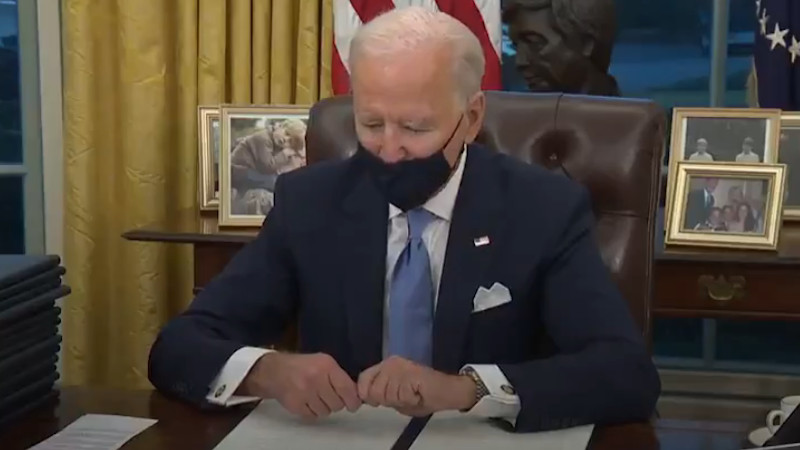 On the first day of assuming office, President Joe Biden cancelled a number  of executive orders issued by Trump earlier. These acts would cause surprise to any good administrator.

While passing an order by Trump earlier, some explanatory notes and justification for the order would have been carefully written and should be available. One would think that the next President, who could not have access to these papers before assuming office, would study the details, analyze the positives and negatives and then take an informed decision. On the other hand, Joe Biden has cancelled the orders, without even giving himself enough time to study the details in depth. While Trump haters applaud Joe Biden for these instant decisions to cancel the orders of Trump, one cannot be blamed if he were to think that the decisions of Joe Biden without studying the details could be a false step on the first day of assuming office.

Of the number of orders cancelled, at least two of them relate to the migrant policy implemented by Trump.

Obviously, Trump felt that there was a need to restrict and screen the inflow of migrants to protect the demographic structure of the USA and to prevent the creation of new zones of conflict between various racial groups in the USA.

It is well known that there are two chief enemies for the USA; the first one  being the Islamic terrorists and second one being the Chinese government.

While the Chinese government wants to outbeat the USA and become the supreme world superpower and without destroying the USA, the Islamic terrorists want to destroy the USA at any cost. Islamic terrorists have not concealed this idea and have repeatedly said that they would leave no stone unturned to achieve their objectives.

In the last few years, Germany has allowed a massive number of refugees to enter its borders from strife-torn countries in the name of humanitarian acts. Amongst the refugees who entered Germany, without being screened adequately, most of them owe their allegiance to Islam and their cultural background and traditional practices are totally different from that of Germans. Once they entered Germany, some of them moved on to other countries in the borderless European Union and now they are spread everywhere in Europe. No one really knows how many refugees are in Europe now and what is their background and motives.

Could it be possible that Islamic terrorists have sent their cadre in the   guise of refugees to Europe? Now, these refugees will never go back. In the course of time, they will demand the change of status from that of refugees to migrants and then after a few years, they will demand full-fledged citizenship. They will start agitating for this by organizing mass protest and European governments will find the situation  grim and difficult to handle.

Europe is already experiencing the negative impact of allowing  a large number of refugees without adequate checks and controls to enter Europe, as violence and terrorist attacks have become too frequent occurrences now with shootings not being uncommon anymore. Europe is now paying a big price for the liberal refugee policy, with social tensions increasingly  becoming evident.

The grim reality is that the demographic structure of Europe will inevitably undergo  major change in the coming years, which is inevitable and will destroy the political and social stability of Europe.

Another region that has now started suffering due to the liberal policy of allowing refugees and migrants without adequate screening for entering is Canada. Until recently a peaceful country, now violent acts in Canada in public places are repeatedly reported. Several separatist groups and terrorist organisations from different regions are now well settled in Canada and are using it as the base for launching their disruptive activities elsewhere. In such circumstances, many people feel that peace  and harmony in Canada will go for a toss in the not distant future.

Such incidents and developments are precisely what Trump wanted to prevent in the USA. It is surprising that an experienced person like Joe Biden could not see the valid point in Trump’s migrant policy.

The USA  is now well-recognized as a country of migrant population. The conflicts between blacks and whites and people belonging to different races living in the USA cannot anymore be brushed aside as a matter of no consequence. The USA is now being described by many people as a disturbed country, which has happened mainly due to its careless migrant policy during the last few decades.

The most pleased people with Joe Biden’s action in reversing the migrant policy of Trump are the aspiring refugees and migrants seeking entry to  the USA from all over the world.

Joe Biden has now thoughtlessly opened the pandora box. He may dislike Trump, however, this should not mean that he so easily dismisses orders of his predecessor without careful evaluation.

The decision of Biden to reverse the migrant policy is like cutting off the nose to spite the face.