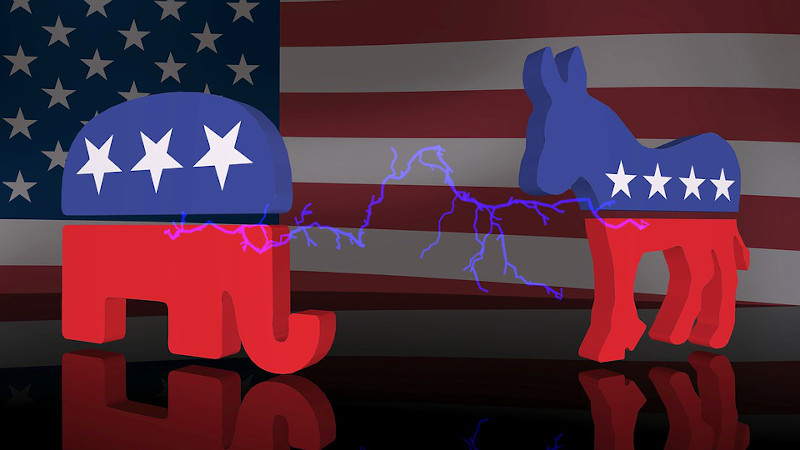 We live in an extraordinary time when long-lived myths are destroyed, and the naked truth inevitably emerges. One such myth was the claim that Republicans are the right wing of the political spectrum in the United States. This statement is based on a comparison of the programs of the two main political parties without considering the factors that determine the polarization of the entire political spectrum. If we compare Republicans with Democrats, then the former is clearly to the right of the latter, but it does not make them the right-wing. This is not even a paradox, if we take into account the fundamental conditions dividing political doctrines into left and right.

Recent developments in the analysis of political philosophies removed the ambiguity in understanding a political spectrum. The study identifies three key factors that influence the political spectrum polarization: attitude to private property, degree of individual freedom, and the scale of wealth redistribution.

The political doctrine is left wing if it assaults private property rights OR subjugates the individual to the collective OR imposes compulsory and scaled-wealth redistribution. The “OR” operand means that these factors can be employed individually or in concert and can be considered unique paths to socialism. Thus, Bolsheviks used all three ways to build communism, and Italian Fascists and German Nazis used coercive collectivization of consciousness and generous wealth redistribution as the main paths to socialism. In contrast, evolutionary socialists funnel the effort to implement a massive wealth redistribution along with the gradual indoctrination of the population.

Evolutionary socialism, a.k.a. reformism, a.k.a. social democracy, a.k.a. democratic socialism is the type of socialist movement that has become most prevalent in the United States. It used the same main paths to socialism as fascism and national socialism: the collectivization of consciousness and wealth redistribution. Note that neither of these doctrines called for outright expropriation of private property on the means of production. The only difference is that fascism and national socialism used bold revolutionary steps in the societal transformation. In contrast, evolutionary socialism, as the name implies, chose the gradual evolutionary path.

Evolutionary socialism was designed to be invisible and gradually worked within the framework of democratic institutions. Not surprisingly, the Fabian Society logo, which organization, together with Edward Bernstein, was the founder of evolutionary socialism, featured a turtle, symbolizing the slow transition to socialism. Their original coat of arms was the wolf in sheep’s clothing, representing the preferred method of achieving a goal.

The poison of socialism has been injected continuously into the healthy body of American capitalism since the first part of the 20th century. Evolutionary socialism has been overlooked and has penetrated all spheres of life. And now, we vividly see the dramatic changes in the educational system, which became the indoctrination machine, in media, which became a socialist-propaganda wing, and in Hollywood, which became an adherent of the Soviet socialist realism.

Figure 1 shows that spending on welfare has gradually increased since 1900 and now continues to rise regardless of which party is in power. This graph represents the trajectory of the advance of socialist traits in American society. It is theoretically assumed that a right-wing president would prevent the growth of wealth redistribution, but practice shows that this is far from being the case. The largest spikes in welfare spending occurred during Republican presidencies: Hoover (1929–1933), Nixon (1969–1974), Ford (1974–1977), Bush Sr. (1989–1993), and Bush Jr. (2001–2009). Under Reagan and Trump, spending declined. Among the Democrats, Roosevelt (1933-1945), Truman (1945-1953), and Kennedy (1961-1963) were the champions of welfare spending. During Clinton’s term, welfare spending was continually decreasing. Of course, it is impossible not to consider, in whose hands the Senate and Congress were, and other historical and economic circumstances, but facts are a stubborn thing. All Republicans, except for Reagan and Trump, not only did not stop welfare spending but increased it significantly.

Suppose Republicans agree with Democrats on wealth redistribution in principle, thinking that it is the right thing to do out of compassion and high moral principles, which has nothing to do with socialism. In that case, they cannot be more wrong. Compulsory wealth redistribution is a gradual and latent assault on private property rights. It is contrasted with the outright expropriation of private property as Marx prescribed, but it nevertheless would achieve almost the same result in the long run. It is a mechanism that punishes success and chooses winners and losers. Wealth redistribution diminishes self-responsibility and self-reliance and keeps the underclass hooked up permanently to the state redistribution machine.

It creates a false sense of economic equality between people and, on the contrary, creates a more stratified society composed of elites that possess the power to distribute wealth and recipients they control. Such a structure resembles a socialist society and is a cell of socialism in the US. As for the collectivization of consciousness, the Right has outright lost the battle for the minds of youth since the American educational system, popular culture, social networks, and mass media have been under the rule of the Left for decades already.

In recent years, many issues that have nothing to do with socialism or capitalism have been discussed by Democrats and Republicans. These issues include the rights of gays and transgender people, women’s rights, abortion, racism, nationalism, and whatever, but not the trajectory of society’s development. As if on purpose, these essential and simultaneously peripheral matters were chosen for discussion in order to disguise the principal consensus between the two parties on the country’s development and show their presumed difference. On the issue of public health care, which is directly related to the socialist transformation of society, the Republicans lost, and when they had the opportunity to correct the situation, they failed miserably to do so.

Based on the previous, we can conclude that despite the right-wing slogans, the Republican Party, in fact, is not an effective defender of capitalism. It allowed both a latent attack on private property and the collectivization of consciousness. That is why the GOP is not a genuine right-wing but, at most, a center-left party. Therefore, the slogan about the non-admission of socialism in the US has long been late. There are plenty of socialist traits in our society that Republicans failed to recognize. We can’t expect the party that allowed the socialist transformation of society to protect it from socialism. The Democrats are the engine of socialist changes, and the Republican elites are enablers.

Therefore, I must conclude that the path to socialism will continue until people organize under the banner of a real right-wing party and fight for economic and personal freedom. There is a public demand for such a party, which will undoubtedly be realized.