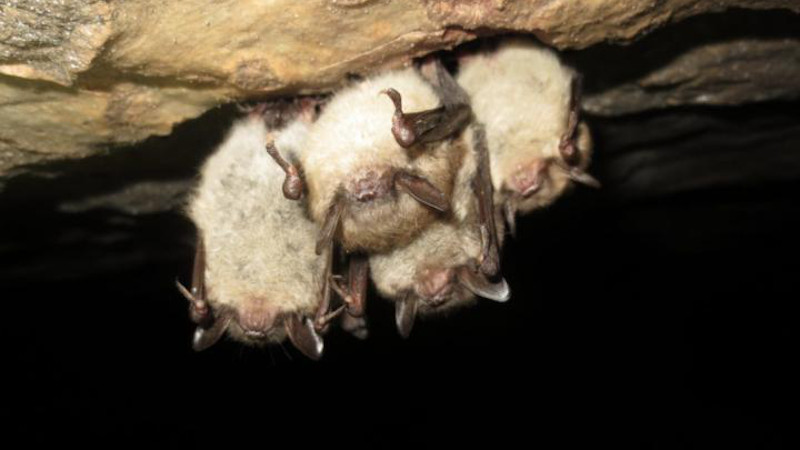 Since 2006, a fungal disease called white-nose syndrome has caused sharp declines in bat populations across the eastern United States. The fungus that causes the disease, Pseudogymnoascus destructans, thrives in subterranean habitats where bats hibernate over the winter months.

Bats roosting in the warmest sites have been hit particularly hard, since more fungus grows on their skin, and they are more likely to die from white-nose syndrome, according to a new study by researchers at Virginia Tech.

But instead of avoiding these warm and deadly sites, bats continue to use them year after year. The reason? Bats are mistakenly preferring sites where fungal growth is high and therefore their survival is low. This is one of the first clear examples of an infectious disease creating an “ecological trap” for wildlife.

Kate Langwig and Joseph Hoyt, both assistant professors from the Department of Biological Sciences in the College of Science, have been studying little brown bat (Myotis lucifugus) populations in Michigan and Wisconsin since 2012, before the fungus first reached those states. This long-term study was the perfect opportunity to see if bats alter their preferences across hibernacula, or hibernation sites, in response to the invasion of white-nose syndrome.

“We see that there is a shift across the regional bat population over time,” said Skylar Hopkins, a previous postdoctoral scholar at Virginia Tech and now assistant professor at North Carolina State University.

“When we look at the population post-invasion, we see that more than 50 percent of the bats are still choosing to roost in warmer sites, even though colder sites are available. But on average, bat roosting temperatures have declined, because the colder-roosting bats have had higher survival rates.”

Their findings were posted in Nature Communications.

To understand how temperatures are playing a role in bat population declines, the researchers used a mark-recapture method, which involves banding bats and then trying to find them later.

The team visited bat hibernacula for sampling twice per year: once in early hibernation, after all of the bats had arrived and settled down for the winter, and once again in late hibernation, before the bats emerged from their hibernation habitat.

If bats were missing in late hibernation that had been present earlier in the winter, those bats had left the hibernacula early and likely died in the cold, insect-free Midwest winter.

The research team also used a swab to measure the fungal loads that were on each individual bat and used a laser thermometer to measure the roosting temperature of the rocks next to each bat.

Now that they know that bats are preferring high mortality sites, Hopkins hopes that their data can be used to think about which sites researchers and conservationists need to prioritize for conservation and how to conserve them.

“Because we know that bats are doing better in the cold sites, the cold sites may be good ones for us to conserve,” said Hopkins. “We can also think more about the warm sites that are acting as ecological traps and whether we should be trying to manage those sites in a different way. Maybe there are interventions that should be done at those sites to prevent most of the population from going there each year and having these big mortality events.”

One’s first instinct upon hearing about these interventions would be to close off these deadly hibernacula entirely. But according to Langwig, it’s just not that simple.

“The thing that is hard is that there are multiple bat species in these habitats. And I worry that there would be cascading impacts on some of the other bat species if we attempted to alter the sites. It depends a lot on the physiology of the bat,” said Langwig, who is an affiliated faculty member of the Fralin Life Sciences Institute and the Global Change Center. “But there may be some creative solutions. There are researchers in Michigan and Pennsylvania who have been working to cool down the warmer sites by modifying the entrances or using solar power to pump air into the sites.”

Of course, temperature is just one aspect of the microclimate that bats experience while they are hibernating. Hopkins and Langwig expect that humidity could also play a role in the spread of white-nose syndrome. But, measuring humidity is easier said than done. Since underground hibernacula have a high relative humidity, it can be difficult to make accurate measurements.

“We’ve designed new humidity loggers to collect better humidity data than has been possible before. These loggers are already deployed in caves and mines across the eastern United States, so we hope to soon understand how humidity has played a role in bat population declines, if at all,” said Hopkins.