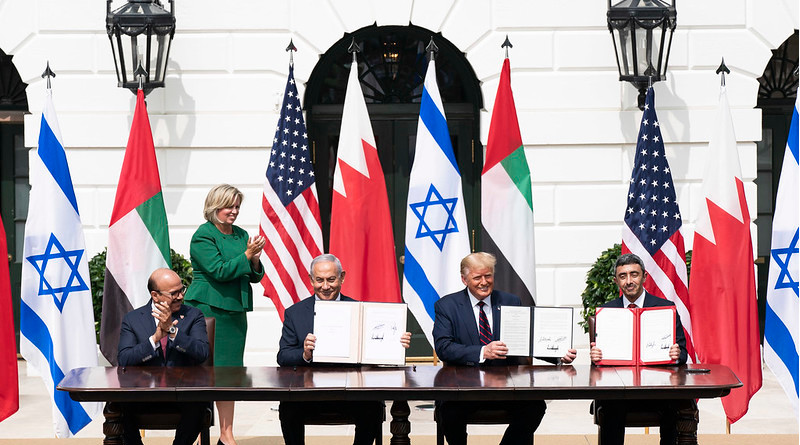 Donald Trump will be remembered as the most controversial leader in modern US history, a man who refused to be politically correct and was not afraid to face the international community, and confront it when needed.

Regardless of your feelings for Trump the man, Trump the president has accomplishments that his successors will find it difficult to erase.

In 2014, Daesh invaded and occupied swaths of territory across Iraq and Syria, and established its “caliphate.”This terrorist organization was formed, flourished and expanded during Barack Obama’s presidency; as commander in chief, he failed to stand by the people of Syria and Iraq, who greatly suffered at the hands of Daesh.

Five years after Daesh emerged, efforts by the Trump administration led to its defeat and the liberation of Mosul, the second-largest Iraqi city, freeing thousands of Iraqis of many ethnicities and religions.

On Oct. 27, 2019, Trump announced to the world that Daesh leader Abu Bakr Al-Baghdadi had been killed the night before in what he described as a “dangerous and daring” US raid. Trump emphasized his country’s determination to pursue not only the remaining Daesh terrorists but all other radical groups that shared its ideology and methods. “Terrorists who oppress and murder innocent people should never sleep soundly, knowing that we will completely destroy them.  These savage monsters will not escape their fate, and they will not escape the final judgment of God,” he said.

Iran has been Trump’s focus since he took office in 2016; he clearly understood the threat of the ayatollahs in Tehran, and how the Joint Comprehensive Plan of Action (JCPOA) had enabled the Iranian regime to spread its influence in the Middle East. The left considered this 2015 deal as one of Obama’s biggest diplomatic achievements, ignoring the fact that the JCPOA has given Iran billions of dollars in sanctions relief that played a part in funding, training and arming its proxy militias in Iraq, Syria, Lebanon, and Yemen.

When Trump authorized the assassination of Qasem Soleimani, commander of the Quds Force of the Islamic Revolutionary Guard Corps and a ruthless Iranian terrorist responsible for the deaths of hundreds of Americans, Israelis, Iraqis and many more, the left argued that the killing was reckless and would escalate the situation with Iran.

Soleimani and Abu Mahdi Al-Muhandis, the Iran-backed Iraqi Popular Mobilization Forces deputy chief who was killed alongside him, were war criminals, a fact overlooked by the same people who thought that overthrowing the Libyan dictator Muammar Qaddafi was an American duty.

In October 2011, Obama said Qaddafi’s death marked the end of a long and painful chapter for the people of Libya. “For four decades, the Qaddafi regime ruled the Libyan people with an iron fist. Basic human rights were denied. Innocent civilians were detained, beaten and killed. And Libya’s wealth was squandered. The enormous potential of the Libyan people was held back, and terror was used as a political weapon.”

Was Qaddafi more dangerous than Soleimani and Al-Muhandis combined? The Democrats seem to think so.

Trump’s most significant accomplishment of the past four years, however, was the diplomatic success in the Middle East, which came in the last few months of his presidency. On Sept. 15, 2019, Trump presided over the signing of the Abraham Accords, two historic normalization agreements between Israel and the UAE and Bahrain, praising the courage of the leaders of these three countries who made it possible for a new era to begin.

Trump said these historic agreements would pave the way for people of all faiths and backgrounds to live together in peace and prosperity. “We’re here this afternoon to change the course of history. After decades of division and conflict we mark the dawn of a new Middle East,” he said at the White House signing ceremony.Similar agreements with Morocco and Sudan followed, and more are in the pipeline.

Regardless of our ethnicity, how we individually identify, or where we may place our views on the political spectrum, we Americans are unified by the constitutional democratic process of our country, and by the pursuit of the protection of that process.

Love him or hate him, when Trump leaves office on Jan. 20 these and similar decisions will define his legacy.

• Dalia Al-Aqidi is a senior fellow at the Center for Security Policy, and a former Republican congressional candidate. Twitter: @DaliaAlAqidi

The article The Trump Legacy That Can Never Be Erased – OpEd appeared first on Eurasia Review.