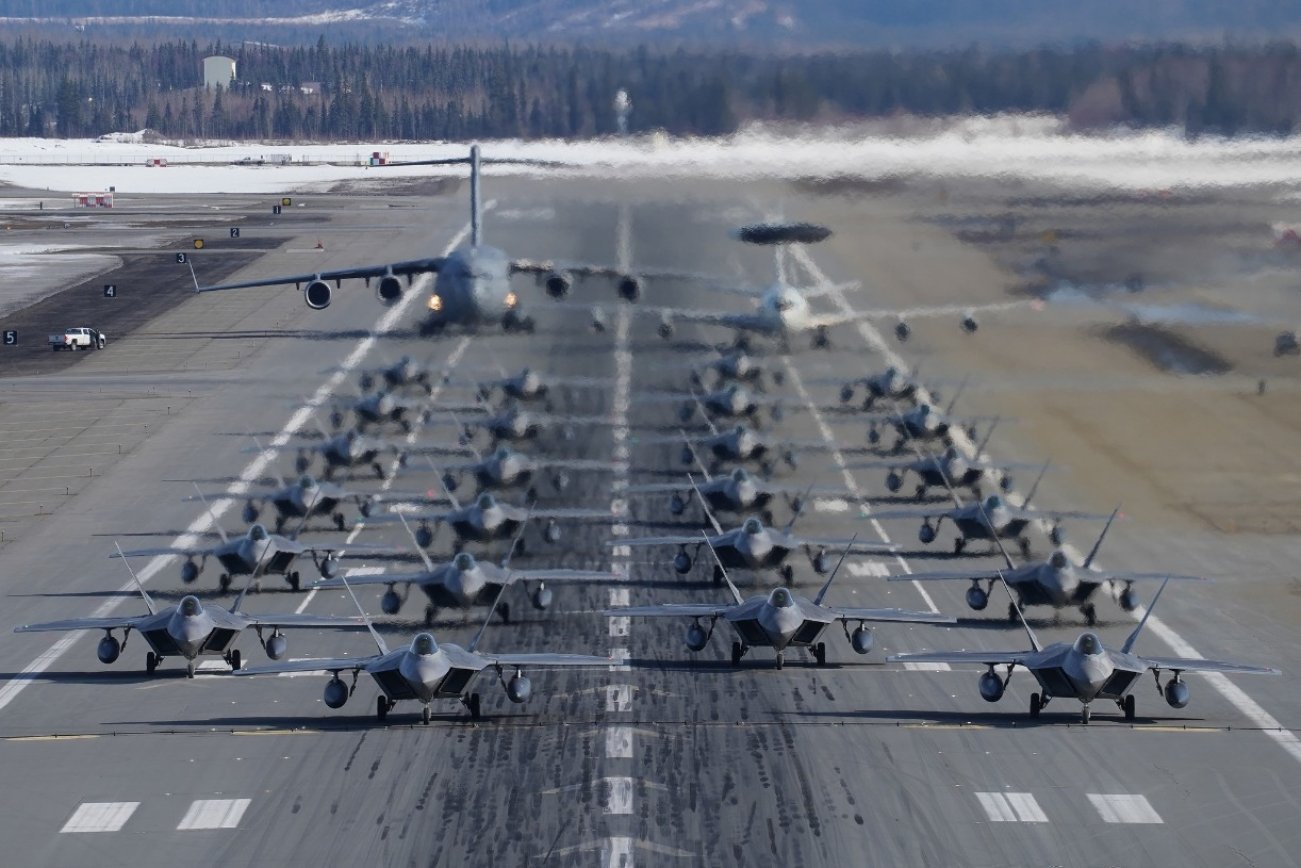 Elephant walks like last Friday’s are meant to demonstrate the Air Force’s ability to mount a series offensive or defensive in the event of such a conflict.

Here’s What You Need to Remember: The primary reason behind these long-range flights for the Russian pilots, particularly for heavy payload bombers, is simply training. In order to be able to execute these long-range bombing missions in the event of real war, Russian pilots conduct training flights that closely resemble how actual combat operations would unfold.

Last Friday, the U.S. Air Force’s 354th Fighter Wing and the 168th Wing of the Air National Guard conducting a massive display of airpower, commonly referred to as an “elephant walk,” by scrambling more than 30 fighters and two refueling aircraft in just a matter of minutes from the airstrips on Eielson Air Force Base in Alaska.

While elephant walks offer an incredible opportunity to take the sort of pictures that have long served as the background on my computer, the real value of the exercise is in testing a unit’s ability to quickly field tactical aircraft in the event of an emergency. It’s also seen as a means of conveying America’s military readiness, which is of particular import in Alaska, where American fighters are often scrambled to intercept Russian nuclear-capable bombers and their escort fighters. “The Elephant Walk isn’t only to practice our abilities to respond quickly,” said U.S. Air Force Col. David Skalicky, 354th Operations Group commander, “This is to show our Airmen who work behind the scenes what Eielson AFB is about, it’s about showing our strength in the arctic arena.”

The elephant walk took place despite Alaska’s bitter cold, and while the Air Force and guard personnel tasked with the maintenance and operation of all the aircraft maintained proper COVID-19 prevention procedures and social distancing. According to Skalicky, these and other obstacles cannot stand in the way of America’s ability to respond in times of crisis.

The F-35A is the conventional take-off variant of America’s latest 5th generation fighter. It carries four bombs or missiles internally as well as an internal 25mm cannon while maintaining its stealthy profile. The F-16s, unconcerned about stealth, each boast nine hardpoints for externally mounted missiles or bombs and an M61 Vulcan cannon. Compared to all that firepower, the two KC-135 Stratotankers may not seem quite as sexy, but they still play an integral role in supporting combat air operations. American fighters were scrambled to intercept Russian aircraft near Alaska no fewer than 14 times in 2020. These intercepts often saw U.S. Air Force F-22 Raptors escorting Russian Tu-95 Bear bombers away from American airspace, along with Russian fighter and support aircraft like their highly-capable Su-35 Flanker fighter and A-50 airborne early warning aircraft. In other words, Russia often sends some of its best equipment to test America’s ability and willingness to respond.

The primary reason behind these long-range flights for the Russian pilots, particularly for heavy payload bombers, is simply training. In order to be able to execute these long-range bombing missions in the event of real war, Russian pilots conduct training flights that closely resemble how actual combat operations would unfold. As a result, the United States also treats each flight like the threat it legitimately poses, as they tend to unfold exactly as a real war might start. Elephant walks like last Friday’s are meant to demonstrate the Air Force’s ability to mount a series offensive or defensive in the event of such a conflict.

“Every Airman across the Fighter Wing contributed to today’s event, and we proved what our team is capable of…supporting, defending, or delivering 5th generation airpower and advanced training,” said Col. David Berkland, the 354th FW commander.

“Stay tuned, because our combat capability will continue to grow, and I’m incredibly proud of the disciplined, professional, combat-focused approach our team displayed today.”

This article first appeared at Sanboxx.