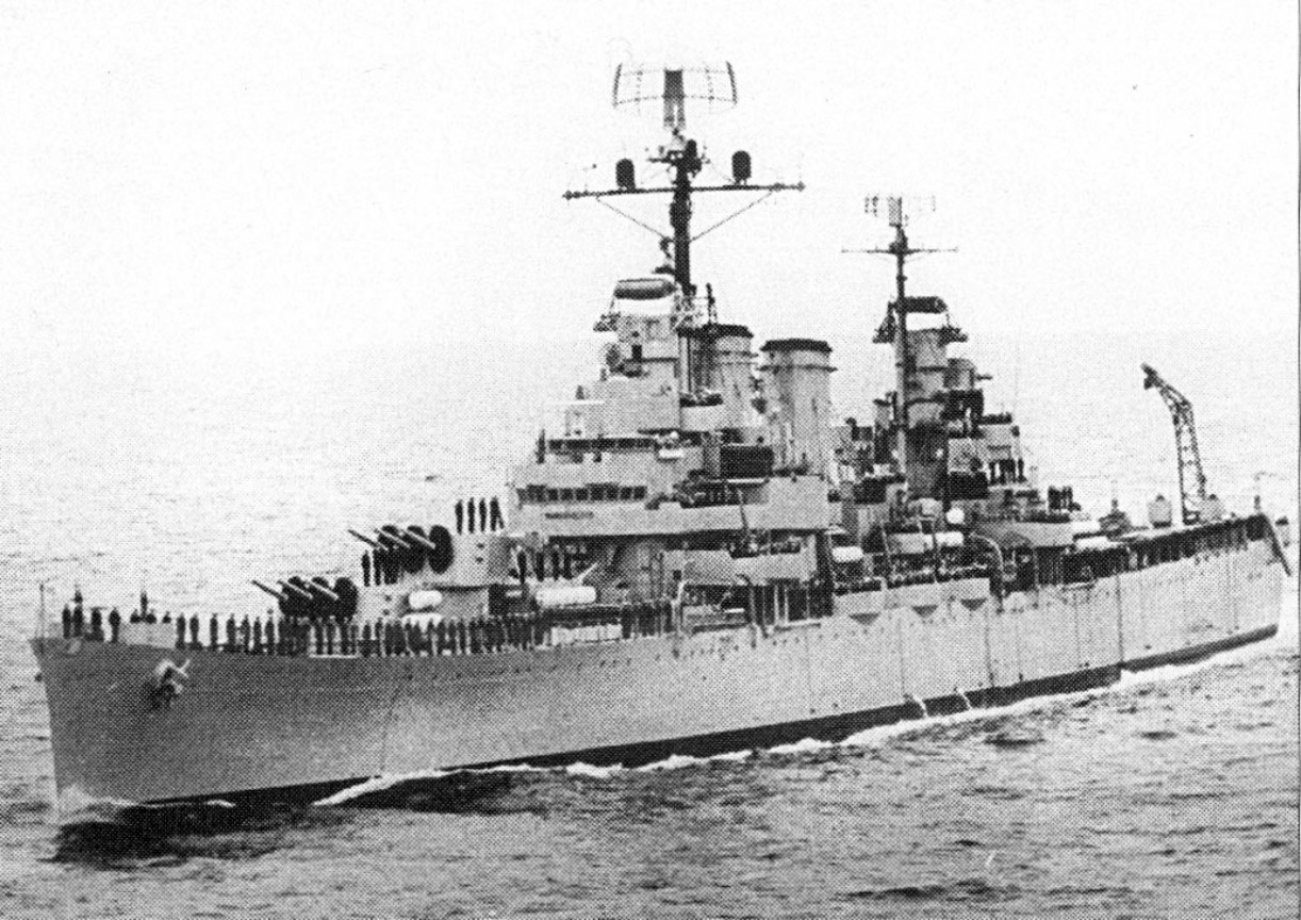 Here’s What You Need to Remember: The sinking of the General Belgrano remains controversial, mostly in Argentina and on the British left. The Argentine Navy and the captain of the Belgrano, however, have maintained that the sinking was legal. Focus on the Belgrano’s end, however, has obscured the service that USS Phoenix performed in the Pacific during World War II. She was the last of the survivors of Pearl Harbor to be lost to enemy action, even if the “enemy” turned out to be the Royal Navy.

Only one ship has ever been sunk in anger by a nuclear submarine. Designed to fight the Japanese, USS Phoenix survived Pearl Harbor and fought in battles across the Pacific. Forty-one years after the Japanese attack, she would fall victim to HMS Conqueror off the Falklands Islands.

The USS Phoenix was the fifth of the Brooklyn class—a group of light cruisers designed to comply with the restrictions imposed by the London Naval Treaty of 1930. The major navies of the world, prohibited from competing in battleships, had turned their attention to cruisers, which turned out to be both expensive and destabilizing. In an effort to limit competition in heavy cruisers, the new treaty established limits on the number of 8″ gunned cruisers allowed each of the signatories. Britain, which needed light cruisers to patrol the empire, hoped that naval architects would design new cruisers around the 6″ gun, and scale down the size of the ships appropriately.

Unfortunately for the cash-strapped Admiralty, the Americans and Japanese had different priorities. The Japanese built the Mogami class, each armed with fifteen 6″ guns in five triple turrets, on a hull as large as a heavy cruiser. The United States responded with the Brooklyns, also armed with 15 6″ guns. The Brooklyns displaced about 10,000 tons (slightly smaller than their Japanese counterparts), and could make 33 knots. In U.S. naval doctrine of the time, light cruisers were expected to lay down a wall of fire alongside the main battle line, thus deterring destroyers from closing and launching torpedo attacks. In practice, there was little functional difference between heavy and light cruisers, as the 6″ guns rapid reload time made up for the extra punch of the 8″ gun.

Laid down in 1935 and commissioned in late 1938, the USS Phoenix was present at Pearl Harbor, but escaped the attack unharmed. By the afternoon of the attack, Phoenix was part of a task force hunting the Japanese task force. In early 1942 she departed for the South Pacific, where she participated in a series of vain efforts to prevent the Japanese conquest of the Dutch East Indies. She missed the Solomons Campaign and spent much of 1943 in overhaul, but returned to the fight in December of that year.

Once back in the Pacific, Phoenix participated in Douglas MacArthur’s New Guinea campaign, and then in operations to liberate the Philippines. In June, she came under attack from Japanese bombers, but did not suffer any serious damage. She was part of Admiral Jesse Oldendorf’s force at the Battle of Surigao Strait in October 1944, and contributed to the destruction of the Japanese battleship HIJMS Yamashiro. The rest of her war service was spent mostly in escort, and although accompanying ships experienced several kamikaze attacks, the Phoenix escaped damage. After the war, Phoenix was placed in reserve.

In April 1951, the Phoenix was sold to Argentina, becoming the Diecisiete de Octubre. She was accompanied by her sister Boise, which became Nuevo de Julio. The Brooklyn class cruisers essentially replaced the aging dreadnoughts that the Southern Cone navies had possessed since the 1910s. In addition to the two Argentine ships, Chile picked up two and Brazil one. In 1956, the Diecisiete de Octubre was renamed the General Belgrano, after an Argentine independence leader. In 1968, General Belgrano was partially modernized, and equipped with two British Sea Cat missile launchers. The Sea Cat, an early anti-aircraft weapon, fired a missile capable of mach .8—slower than most jet fighters and surface-to-surface missiles at the time.

Apart from conducting the initial landings, the Argentine Navy was largely quiet at the beginning of the Falklands War. On April 26, however, it was decided to dispatch the General Belgrano and two escort destroyers on patrol south of the islands. Although the political purpose of this patrol was understandable, its military logic is unclear. General Belgrano did have certain advantages against modern naval vessels. Her 6″ guns would have made very short work of any British ships unfortunate enough to wander within twelve or so miles. General Belgrano’s armor, while considerably lighter than a battleship, might still have been sufficient to provide considerable protection from the surface-to-surface missiles of the day. However, while General Belgrano’s initial probe was in the direction of the British task force, it is extremely unlikely that any British surface ship would have wandered into her patrol area. Having virtually no anti-air or anti-submarine capability, her ability to decisively affect the battle was extremely low. On May 2, General Belgrano and her group began repositioning toward the Argentine mainland, perhaps in preparation for another sortie to be coordinated with the Argentine Air Force.

Unfortunately for the Argentines, the General Belgrano had been detected by the submarine HMS Conqueror on April 29. Conqueror shadowed the group while the British government decided on the appropriate course of action. On May 2, Conqueror moved into position and fired three conventional, non-homing torpedoes at General Belgrano. Two of the torpedoes hit. The captains of the accompanying destroyers claimed that, because of the gloom and the electrical failure on the cruiser, they were unaware that General Belgrano had been hit. They moved off, and only noticed the absence of the cruiser several hours later. Inspection after the battle would indicate that one of the destroyers had been hit by a torpedo that failed to explode, indicating, among other things, superb marksmanship on the part of Conqueror. Severely damaged, General Belgrano rolled over and sank about thirty minutes after the attack. 770 of the crew were later rescued, but 323 Argentines died.

There had been some hope for mediation before the attack on General Belgrano, but these hopes sank almost as quickly as the cruiser. Argentines have ascribed belligerent motives to the British, claiming that the ship was outside a previously announced exclusion zone, and that it was moving away from the British task force. However, the exclusion zone was generally understood to have been abrogated, and no principle of war excludes attacks on retreating, as opposed to surrendered, enemy forces. Indeed, since General Belgrano was repositioning rather than retreating, she still represented a potential threat to British forces. Finally, while General Belgrano’s obsolescence limited the threat that she could pose to British forces, there remained some plausible ways in which she could have restricted British operations around the islands. Moreover, the sinking of the General Belgrano helped deter the Argentine Navy from further action, greatly facilitating the British war effort.

The sinking of the General Belgrano remains controversial, mostly in Argentina and on the British left. The Argentine Navy and the captain of the Belgrano, however, have maintained that the sinking was legal. Focus on the Belgrano’s end, however, has obscured the service that USS Phoenix performed in the Pacific during World War II. She was the last of the survivors of Pearl Harbor to be lost to enemy action, even if the “enemy” turned out to be the Royal Navy.

Robert Farley, a frequent contributor to The National Interest, is a Visiting Professor at the United States Army War College. The views expressed are those of the author and do not necessarily reflect the official policy or position of the Department of the Army, Department of Defense, or the U.S. Government. This piece was originally featured in September 2019 and is being republished due to reader interest.