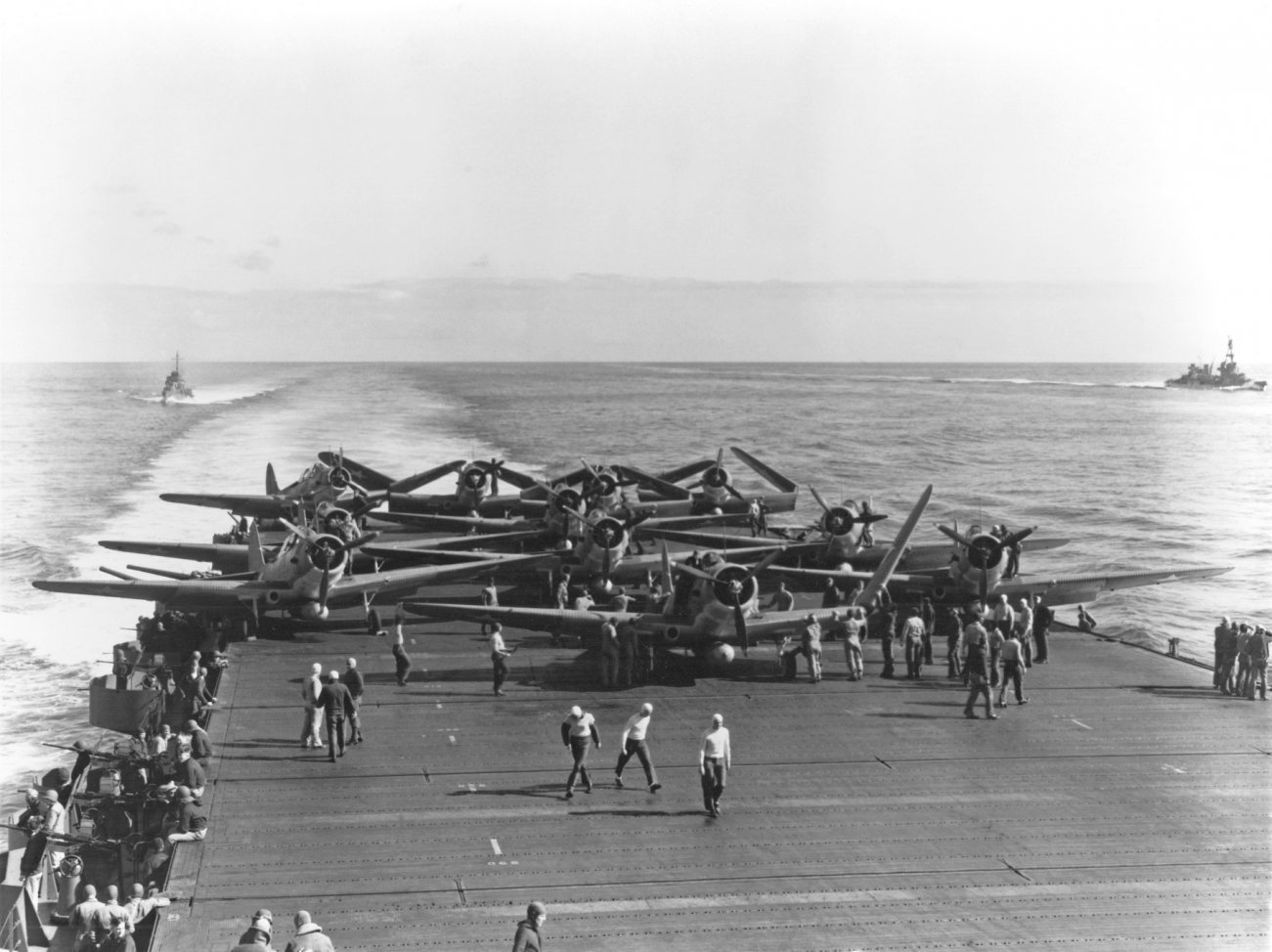 It was at Midway where the U.S. demonstrated effective combat capability very early on – inflicting severe damage on a motivated and experienced enemy.

Here’s What You Need To Remember: Midway was, in many ways, a more decisive battle than D-Day. The loss of four of Japan’s carriers stopped the Rising Sun dead in its tracks, giving America space to reinforce the Pacific – and slowly retake it.

Thursday, June 6th saw the 75th anniversary of the Allied invasion at Normandy, the amphibious assault phase of Operation Neptune, or what we commonly remember as D-Day.  U.S. troops who landed at Normandy – particularly at Omaha Beach – waded ashore amidst a storm of chaos, a blizzard of machine gun fire, and a hail of plunging mortars.  Despite great confusion and casualties, at the squad level and below, the men at Omaha rallied and pressed forth with tenacity and nerve to breach sand-berms and barricades, neutralize enemy positions, and salvage their sectors.  Losses at Omaha were immense – but American resolve helped establish a foothold on the coast of France – and “the rest,” they say, “is history.”

Without doubt, the enormous importance of D-Day as a logistical and operational undertaking – and the gallantry of Allied forces that June morning is unquestioned.  It rightfully exemplifies American character, courage, and commitment. However, it is important to note that as far as the battle’s strategic significance is concerned, a strong case can be made that other battles of World War II are more critical than D-Day.

Today – June 7th – is the 77th anniversary of the Battle of Midway, an engagement that not only follows one calendar day after D-Day but is a battle that is consistently considered to be a critical turning point for America in World War II.  Midway was likely the most strategically significant battle for the U.S. in the Pacific Theater. Not only did U.S. Naval forces halt Japan’s dynamic and multi-pronged advancement across the Pacific at Midway, but the battle occurred in midyear 1942 when victory for the Allies was far from certain.

While the tactical result of the battle was stunning – the U.S. sunk four Japanese fleet carriers Hiryu, Soryu, Kaga and Akagi, a heavy cruiser and destroyed 248 enemy aircraft – it is the perilous backdrop of America’s war fortunes in 1942 that make Midway’s tide-turning outcomes all the more significant.

Recall that Midway occurred only six months after the attack on Pearl Harbor – a period when America’s military and industrial capabilities were a far cry from the potent war-machine they would be by 1944 and ’45.  Aside from Colonel Jimmy Doolittle’s gutsy bombing raid in April, demoralizing defeats had largely characterized the Allied combat experience in early 1942 – from Wake Island, Malaysia, Singapore, and the Philippines in Asia, to the disastrous Raid on Dieppe in France.  Other engagements – such as the Battle of the Coral Sea – were more akin to arguably draws than outright victories. Midway halted that trend with a shocking blow.

Midway is also crucial because of when it occurred in the context of Allied Grand Strategy for the war.  Although both Roosevelt and Churchill had agreed to a “Europe First” approach to defeating the Axis Powers, in mid-1942, it was in the Pacific Theater where the U.S. was executing significant offensive operations with joint forces and combined arms.  It was at Midway where the U.S. demonstrated effective combat capability very early on – inflicting severe damage on a motivated and experienced enemy. Conversely, American efforts in the European Theater in 1942 primarily consisted of naval blockade and convoy protection in the Atlantic and continued material support to Great Britain and the Soviet Union.  It wouldn’t be until Operation Torch in late 1942 where the Allies – led by the U.S. – opened a genuine “Second Front” on Europe’s doorstep.

It is important to remember that by the time Overlord was launched in mid-1944, the noose around the neck of Nazi Germany had been steadily tightening.  Italy’s role as an Axis power had been significantly reduced (having surrendered in 1943), the Wehrmacht had lost North Africa and suffered catastrophic defeats at Stalingrad and Kursk, the Red Army was sweeping back across Eastern Europe, Rome was liberated, and the Allies had primarily established air superiority over the continent.  By 1944, the Allies were combat-hardened, and American war production was at peak levels. This all stood in stark contrast to 1942, when America and her allies remained largely on the defensive, and in many cases, in retreat.

So – with these points in mind, why is there not a greater appreciation for Midway every June?  Its strategic importance in blunting the Japanese and the way the lopsided American victory lifted our morale at a tough period in the war, all argue for greater acknowledgment and understanding of the battle.  And yet, Midway doesn’t seem to capture the same level of attention or interest that D-Day does every year.

The fact that Midway’s anniversary falls one day after D-Day may be part of the reason – it is overshadowed.  It may also be that the story of American ground troops at Normandy, braving the horrors on the beach to secure a toehold in Europe, is something that resonates more personally with people on the most basic and emotional levels.  We understand it better because of its mortal qualities. We’re more affected by – and thus seem to appreciate more – the visceral aspects of combat, the grit and grind and human tragedy of war. Perhaps Midway is less captivating in this regard.

The point of all of this is not – to diminish the heroism and experiences of anyone who landed ashore in France on June 6th.  Nor is it to suggest that the contributions of those who did their duty in one theater at one time are greater or lesser than the contributions of those in another theater at a different time.  Those who gave their all in World War II did so regardless of place, objectives, or the overarching status of the conflict.

The point of all of this is – that we have an obligation to develop a greater recognition of Midway and its strategic importance in the way that we recognize D-Day and its significance as exemplifying American valor and the American combat experience in Europe.  There is an imperative to recognize the significance – from the personal to the academic – of all of these campaigns.

Looking ahead, 2019 marks the 75th anniversaries of several major battles of the Second World War – from Saipan and Peleliu to Anzio, Operation Market Garden, and the Hurtgen Forest.  1944 also saw the Battle of the Philippine Sea – known as “The Great Marianas Turkey Shoot” – and the Battle of Leyte Gulf, which is considered the biggest naval engagement of WWII and possibly the largest in world history.

As we commemorate each of these upcoming anniversaries, we have a golden and timely – but limited – opportunity to gain a new appreciation for the importance of these events and to understand the role that our fellow Americans played in them.

Connor Martin is a U.S. Marine veteran and policy analyst in Washington DC.

This article by Connor Martin originally appeared at Real Clear Defense. It first appeared in The National Interest in June 2019.