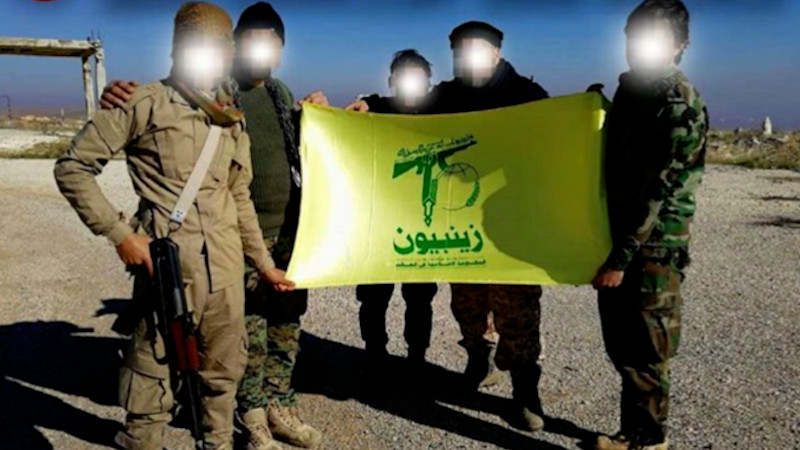 The consequences of three strategic blows to the heart of the Iranian regime (the killing of Fakhrizadeh and Qassem Soleimani and the revelations of state terrorism in the Belgian (court of Antwerp) has had profound effects on Iran and the region, and that hollow Islamic fundamentalist awe has crumbled. These blows had especially profound effects on the faith of pro-regime militias deployed in the region. For example, let us examine the state of the pro-Iranian Zainab -Yun militias.

Zainebiyoun is a pro-Iranian militant group in Syria. This group is made up of Pakistani Shiites as well as many Afghan Shiites who lived as war refugees in Pakistan.

Since late 2012, the IRGC’s Quds Force, under the pretext of defending the Shiite shrine in Syria, which was damaged in the civil war and ISIS attacks, exploiting poverty and with the ideology of Islamic fundamentalism. According to the Zainabiyoun Facebook page, volunteers must be between 18-35 years of age and physically fit. They are offered up to Rs. 120,000/ ($1200) as a monthly salary with 15 days of holidays after three months.

By doing so, the Iranian regime both encouraged the hatred against Sunni groups fighting on the opposition side in Syria and organized, trained, and armed the Zainebiyoun group. The Quds Force under Qassem Soleimani in 2016, when the Assad regime suffered defeats from the opposition, used the pretext of protecting Shiite holy sites and got directly involved in the Syrian civil war using Zainebiyoun as a frontline force and breaking Assad’s opposition forces’ line in Aleppo. The Syrian Observatory for Human Rights (SOHR), a monitoring group based in the UK, estimated the death toll since the start of the war to be as high as 511,000 as of March 2018. Years of relentless fighting left 6.6 million displaced internally and 5.6 million around the world, according to the United Nations High Commissioner for Refugees (UNHCR). The number of forces of the Zainebiyoun brigade in Syria is estimated at between 2,000 and 5,000, according to news agencies. Iran buries the victims of this group as martyrs in the city of Qom.

But since 2019, with the assassination of Qassem Soleimani, ex-commander of the Quds Force, and with the US maximum pressure policy leading to the closure of the means of funding this group and Israeli airstrikes on the positions of this and other similar groups, the IRGC’s ability to use these groups has diminished. Consequently, the Zainebiyoun faith is in limbo.

What will be the fate of this group?

If Zainebiyoun returns to Pakistan, they threaten Pakistan’s national security because members of the Zainebiyoun brigade have experience of war in Syria. Although approximately 85-90 percent of Pakistan’s population is Sunni, Iranian-backed Shiite groups could play a destructive role there, and the return of Zainebiyoun militants is dangerous for Pakistan’s security. Pakistan sees clashes between Shiite and Sunni groups every year, especially in the month of Muharram (holly month in Islam). In response to the formation of the Zainebiyoun Brigade in Pakistan, anti-Shiite attacks have been launched in the country since 2015. Religious tensions and sectarian strife threaten Pakistan’s internal security and destabilize not only the country but the entire region. Qaani, the new commander of the IRGC’s Quds Force, before taking command as the successor of Qassem Soleimani was closely recruiting militants from Pakistan and Afghanistan, transferring them to Iran and training them. Qaani has extensive networks in the region. This is also a concern for Pakistani security experts.

How was the Zainebiyoun Brigade formed?

Since 1986, Pakistan has been the scene of violent sectarian clashes between Sunnis and Shiites, in which Iran has also played a role.

The leader of the Zainebiyoun group in Pakistan, Arif Hussain Hussaini, was a follower of Khomeini. Hussaini, with financial support from Iran, established networks of recruits and sought to increase the influence and expansion of Islamic fundamentalism in Pakistan. He pursued policies in favor of Khomeini in Pakistani schools and guided young people to study in Iran. Hosseini made every effort to bring Iranian fundamentalist ideology into Pakistan, and his efforts with the establishment of the Zainebiyoun Brigade took shape. Jamee-e-Mustafa University, located in Qom, Iran, is one of the most important centers where students from different countries are recruited and Iran facilitates their stay under the pretext of education. The Al-Mustafa international University will receive 309 billion Tomans from the government in this year’s budget and 465 billion Tomans will be provided by the government for the budget of 1400 … Al-Mustafa Society has already been operating outside Iran on charges of “money laundering and financing activities “Terrorist “was also encountered; In 1995, Kosovo prosecutors demanded the expulsion of an Iranian cleric who was active in the country as a representative of the Mustafa community.

After years of training and setting up these networks, IRGC easily began recruiting Pakistani Shiite militias. In fact, Hosseini’s efforts are the main basis for the formation of the Zainebiyoun Brigade, which was deployed in the Syrian civil war.