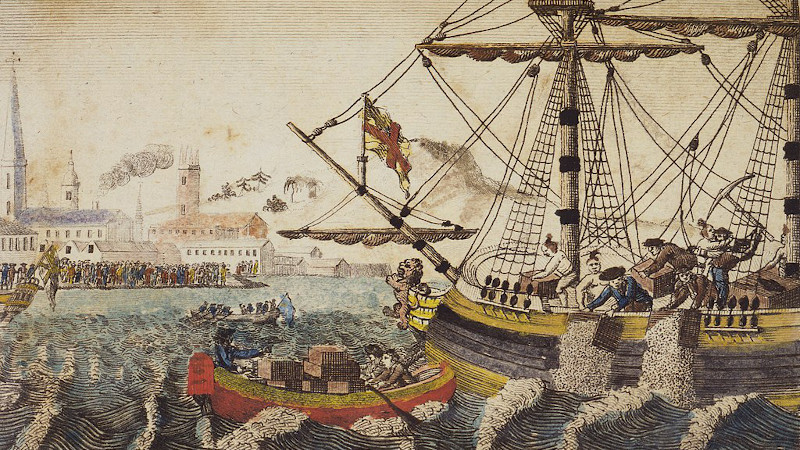 Two hundred and forty-seven years ago this month, a group of American opponents of the Crown’s tax policy donned disguises and set about methodically destroying a shipment of tea imported into Boston by the East India Company. The vandals trespassed on privately owned ships in Boston Harbor and threw the tea into the ocean. These protesters were thorough. Not content with having destroyed most of the company’s imported tea that night, the activists later discovered another tea shipment which had been unloaded at a warehouse in Boston. The activists then broke into the warehouse and destroyed that tea, too. Total damages amounted to more than $1.5 million in today’s dollars.

This was the work of the Sons of Liberty, a group led in part by Samuel Adams and which would become known for acts of resistance, arson, and violence committed against tax collectors and other agents of the Crown. Notably, however, as time went on, acts of resistance in America escalated, at first into widespread mob violence, and then into military action and guerrilla warfare.

Why did many Americans either engage in this behavior or support it? The simplistic answer has long been that the colonists were angry that they were subjected to “taxation without representation.” This is the simplistic version of history often taught in grade school. The reality, of course, is that the conflict between the “patriots” and their former countrymen eventually became a deeply seated (and violent) culture war.

It Wasn’t Just about Taxes

The taxation-without-representation argument endures, of course, because it is useful for the regime and its backers. Advocates for the political status quo insist there is no need for anything like the Boston Tea Party today because modern Americans enjoy representation in Congress. We are told that taxation and the regulatory state are all necessarily moral and legitimate because the voters are “represented.” Even conservatives, who often claim to be for “small government,” often oppose radical opposition to the regime—such as secession—on the grounds that political resistance movements are only acceptable when there is no political “representation.” The implication is that since the United States holds elections every now and then, no political action outside of voting—and maybe a little sign waving—is allowed.

It’s unlikely the Sons of Liberty would have bought this argument. The small number of millionaires who meet in Washington, DC, nowadays are hardly “representative” of the American public back home. The 1770s equivalent would have consisted of throwing the Americans a few bones in the form of a handful of votes in Parliament, with seats to be reliably held by a few wealthy colonists, far beyond the reach or influence of the average member of the Sons of Liberty.

But attempts to frame the revolution as a conflict over taxes largely misses the point. Political representation was not the real issue. We know this because when the 1778 Carlyle Peace Commission offered representation in Parliament to the Continental Congress as part of a negotiated conclusion to the war, the offer was rejected.

The Revolution Was Partly a Culture War

By the late 1770s, the fervor behind the revolution had already gone far beyond mere complaints about taxation. This was just one issue among many. Rather, the revolution quickly became a culture war in which self-styled “Americans” were taking up arms against a foreign, immoral, and corrupt oppressor. Mere offers of “representation” were hardly sufficient at this point, and it’s unlikely any such offers were going to be enough after the events of 1775, when the British finally marched into Massachusetts and opened fire on American militiamen. After that, the war had become, to use Rothbard’s term, a “war of national liberation.”

This ideological and psychological divide perhaps explains the ferocity with which the American revolutionaries resisted British rule.

For example, when we consider the many other protest actions by the Sons of Liberty in the lead-up to the revolution, many of them could easily be described as acts of nondefensive violence, intimidation, and destruction. Many tax collectors resigned from their offices in fear. Others, including citizens merely suspected of supporting the British, were tarred and feathered (i.e., tortured) by the protestors.

Known loyalists were routinely threatened with physical harm to themselves, their families, and their property. Many loyalists fled the colonies in fear for their lives, and after the closure of Boston Harbor, many fled to inner Boston seeking protection from the mobs. Loyalist homes were burned, and theft committed by members of the Sons of Liberty was routine (hundreds of pounds were stolen from Governor Hutchinson’s private home after it was ransacked by a mob of poor and working-class Bostonians). Caught up in all of this, it should be remembered, were children and spouses of the guilty parties, who in many cases were just low-level bureaucrats.

In the southern theater of the war, for example, the British Army armed loyalist militias who engaged in a scorched earth campaign against the rebels. They burned private homes to the ground, cut up and murdered pregnant women, displayed the severed heads of their victims, and employed other tactics of terrorism.

The rebels responded in kind, attacking many who had no role in the attacks on patriot homes, including women, and torturing suspected Tories with beloved torture methods such as “spigoting” in which the victims are spun around and around on upward-pointing nails until they are well impaled.

This sort of thing cannot be explained by mere disagreement over taxation. Acts of violence like these represent a meaningful cultural and national divide.

How Big Is the Cultural Divide in America?

For now, the cultural divide in the United States today has yet to reach the proportions experienced during the revolution—or, for that matter, during the 1850s in the lead-up to the American Civil War.1

But if hostilities reach this point, there will be little use in discussions over the size of the tax burden, mask mandates, or the nuances of abortion policy. The disdain felt by each side for the other side will be far beyond mere compromises over arcane matters of policy.

And just as discussions over “taxation without representation” miss the real currents underlying the American rebellion, any view of the current crisis that ignores the ongoing culture war will fail to identify the causes.

Yet, the culture war has also likely progressed to the point where national unity is unlikely to be salvaged even by charismatic leaders and efforts at compromise. When it comes to culture, there is little room for compromise. It is increasingly apparent that the only peaceful solution lies in some form of radical decentralization, amounting to either secession or self-rule at the local level with only foreign policy as “national” policy. Had the British offered these terms in 1770, bloodshed would have likely been avoided. Americans must pursue similar solutions now before it is too late.

The article The American Revolution Was A Culture War – OpEd appeared first on Eurasia Review.