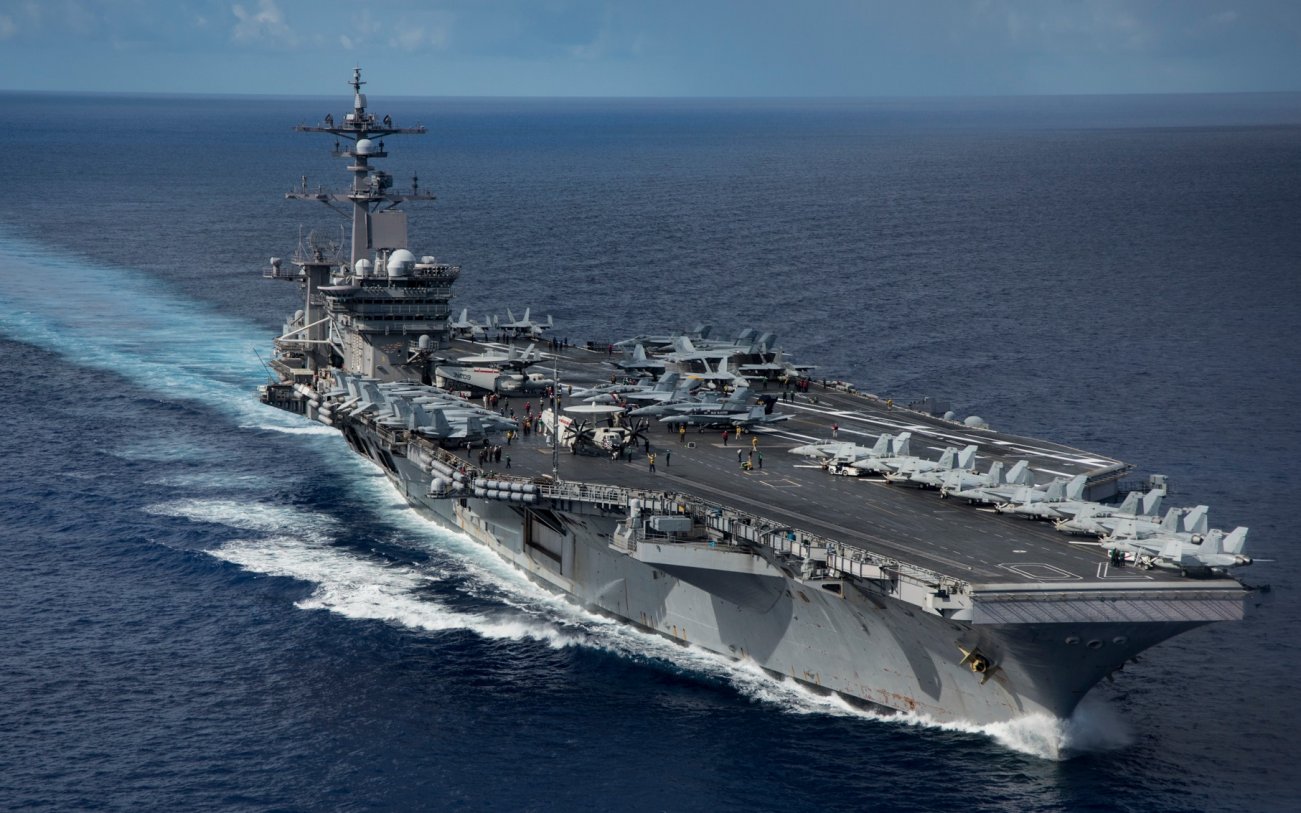 No other nation has deployed a nuclear-powered supercarriers of comparable size and striking power.

Here’s What You Need to Know: Nimitz-class supercarriers will continue to sail the world’s oceans well into the mid-twenty-first century.

Giant aircraft carriers have become synonymous with U.S. military power, but many do not realize just how exceptional these vessels are.

These floating air bases are loaded with dozens of advanced war planes and can launch up to 150 sorties per day. No other nation has deployed a nuclear-powered supercarriers of comparable size and striking power—and the United States Navy operates eleven of them.

All but one of those carriers belongs to the Nimitz-class, a design which until 2017 was the largest vessel ever built, with hulking displacement exceeding 113,000 tons loaded and a ship’s company of 3,200.

Named after Chester Nimitz, legendary commander of U.S. Pacific forces during World War II, the Nimitz was then only the United States’ second nuclear-powered carrier when she was commissioned in 1975 with hull number CVN-68.

The preceding USS Enterprise employed eight nuclear reactors, but the Nimitz generated nearly as much power (190 megawatts) using just two Westinghouse A4W reactors to turn four steam turbines. Those turbines crank four bronze propellers in the stern that can propel the 330-meter long vessel—that’s longer than three football fields—up to speeds of thirty knots (thirty-five miles per hour), adequate to outrun most diesel-electric submarines. The reactors only require refueling every twenty years, thought that process is lengthy, expensive, and usually combined with a major overhaul.

In the thirty-eight years between 1968 and 2006, ten of the gargantuan flattops were built in a huge 662-meter long drydock in Newport News, Virginia, each one introducing improvements over its predecessor.

Then the Theodore Roosevelt and its four successors were built using new modular construction techniques, reducing construction time by sixteen months, and had two-and-a-half inches of Kevlar armor added to key areas.

The Nimitzes’ angled flight deck towers fifty-seven feet over sea level and spans 4.5 acres, allowing one aircraft to land at the same time as another takes off using Catapult Assisted Takeoff and Barrier-Assisted Recovery, or CATOBAR, in which a steam catapult helps propel heavily-laden aircraft off the flight deck while three or four tripe wires stand ready to snag an airplane’s arresting hook while it approaches. This allows for the operation of fast and heavily loaded jets, and it facilitates the ability to surge aircraft launch and recovery to very high tempos in critical combat scenarios.

For comparison, carriers in service with Russia, China and India featured an upcurved “ski-jump” ramp which significantly limits aircraft takeoff weight, while other navies rely on lower-performing vertical-takeoff jump jets.

Only one other active carrier, the French forty-eight-thousand-ton Charles De Gaulle, currently uses CATOBAR takeoff, though China and India are building CATOBAR-equipped carriers.

Most Nimitz-class vessels feature four catapults and arrestor wires. Four huge elevators in the side of the carrier then transfer aircraft to hangars in lower deck, where there are wingtips are folded inwards to conserve space.

Following three catastrophic carrier accidents during the 1960s, the Nimitz-class was designed to be especially resilient to damage, and has three hangars separated by heavy steel doors to prevent fires from spreading. These and other safety measures have prevented major disasters on the Nimitz carriers, though fatal landing accidents inevitably still occur.

Flight activities are coordinated from a control tower situated atop a superstructure on the rear right-side of the carrier called “the island.” The island also houses no less than fourteen different radars specialized in tasks ranging from flight control, air defense and missile targeting.

Carriers invariably deploy with a taskforce of around a half-dozen escorting frigates, destroyers, cruisers and usually one attack submarine. These vessels act as sentries to hunt down submarines and bombers before they get to close, provide a long-range air defense umbrella, and even serve to divert missiles and torpedoes towards themselves to protect the carrier.

While carriers never want to engage enemies directly, they do have short range defenses to thin out any missiles or aircraft that make it through the gauntlet. These include radar-guided Sea Sparrow missiles (range twelve to thirty miles), super-rapid firing radar-directed auto cannons called Close-In Weapons systems, and on the Reagan and Bush, cheap, short range Rolling Air Frame missiles in twenty-one-cell launchers. Additionally, the carriers employs multiple electronic warfare and anti-torpedo systems to misdirect incoming munitions.

Fortunately, there have been no serious attacks on a U.S. carrier at sea since World War II.

A carrier’s real values lies in its aircraft, which are administratively grouped in a separate unit called the Carrier Air Wing incorporating nearly 2,500 aviators and support personnel. These have evolved considerably over the years, including the integration of female aviators and Marine Hornet squadrons. Originally, the Nimitz-class carried over a hundred specialized aircraft: speedy, heavily armed F-4 Phantom and F-14 Tomcat jets designed to intercept enemy aircraft (and double as recon jets), and slower A-6 Intruder and A-7 Corsair bombers for pounding surface targets.

In the 1980s, the Navy introduced F/A-18 Hornet, a jack-of-all-trades supersonic attack plane. As the threat of mass bomber attacks evaporated with the end of the Cold War, the Navy decided it would be more efficient to focus on a single multirole design, the FA-18E/F Super Hornet, which can fly further and more stealthily than its smaller predecessor, as well as the specialized EA-18G Growler electronic attack model.

The Vikings were retired, arguably prematurely, their anti-submarine role subsumed by a squadron of more effective though shorter-range SH-3 or SH-60 helicopters, which also provide search-and-rescue services for downed pilots.

Air-refueling duties are performed buddy-on-buddy by Super Hornets. Since 1966 long-range C-2A Greyhound turboprop transports have delivered passengers and cargo to carriers, but these will be replaced by more flexible but expensive CV-22 Osprey tilt-rotors that can switch between vertical and conventional takeoff modes.

Today’s average sixty-four-jet air wing is significantly smaller than its predecessors, with three squadron of Super Hornets, a half-size squadron of Growlers, and two squadrons of older FA-18C/D Hornet jets which are transitioning to new F-35C Lightning stealth jets. These last enable penetration of defended enemy airspace and can fuse their powerful sensors with friendly ships or Super Hornets.

However, there are concerns that the aircrafts’ five hundred and seven hundred miles combat radiuses will force carriers to come dangerously close to enemy shores. New long-range ground-based ballistic missiles, air and sea-launched supersonic cruise missiles, and very quiet yet inexpensive AIP-powered submarines pose major new challenges to the carrier’s survivability in littoral waters, and their role in a high-intensity conflict in the Western Pacific is subject to debate.

The Nimitz-class flattops were built to serve for a half-century, which means the Nimitz is scheduled for retirement in the 2020s, to be replaced by carriers of the new, $13-billion Gerald Ford class, which boast fancy electromagnetic catapults. However, in order to maintain a twelve-carrier Navy, the Nimitz and its sister ships may see their service lives extended. One way or another, Nimitz-class supercarriers will continue to sail the world’s oceans well into the mid-twenty-first century.

Sébastien Roblin holds a Master’s Degree in Conflict Resolution from Georgetown University and served as a university instructor for the Peace Corps in China. He has also worked in education, editing, and refugee resettlement in France and the United States. He currently writes on security and military history for War Is Boring .

This article first appeared in 2018.