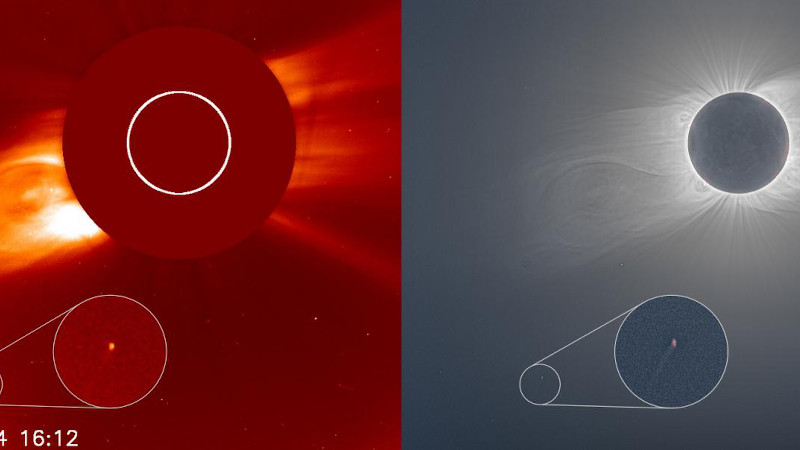 As Chile and Argentina witnessed the total solar eclipse on Dec. 14, 2020, unbeknownst to skywatchers, a little tiny speck was flying past the Sun — a recently discovered comet.

This comet was first spotted in satellite data by Thai amateur astronomer Worachate Boonplod on the NASA-funded Sungrazer Project — a citizen science project that invites anyone to search for and discover new comets in images from the joint European Space Agency (ESA) and NASA Solar and Heliospheric Observatory, or SOHO.

Boonplod discovered the comet on Dec. 13, the day before the eclipse. He knew the eclipse was coming, and was eager to see whether his new comet discovery might appear in the Sun’s outer atmosphere as a small speck in eclipse photographs.

The comet, named C/2020 X3 (SOHO) by the Minor Planet Center, is a “Kreutz” sungrazer. This family of comets originated from a large parent comet that broke up into smaller fragments well over a thousand years ago and continues to orbit around the Sun today. Kreutz sungrazing comets are most commonly found in SOHO images. SOHO’s camera works by mimicking total solar eclipses: A solid occulting disk blocks out the otherwise blinding light of the Sun, revealing dimmer features in its outer atmosphere and other celestial objects like comets. To date, 4,108 comets have been discovered in SOHO images, with this comet being the 3,524th Kreutz sungrazer spotted.

Around the time the eclipse image was taken, the comet was traveling at roughly 450,000 miles per hour, about 2.7 million miles from the Sun’s surface. The comet was around 50 feet in diameter — about the length of a semitruck. It then disintegrated to dust particles due to intense solar radiation, a few hours before reaching its closest point to the Sun.