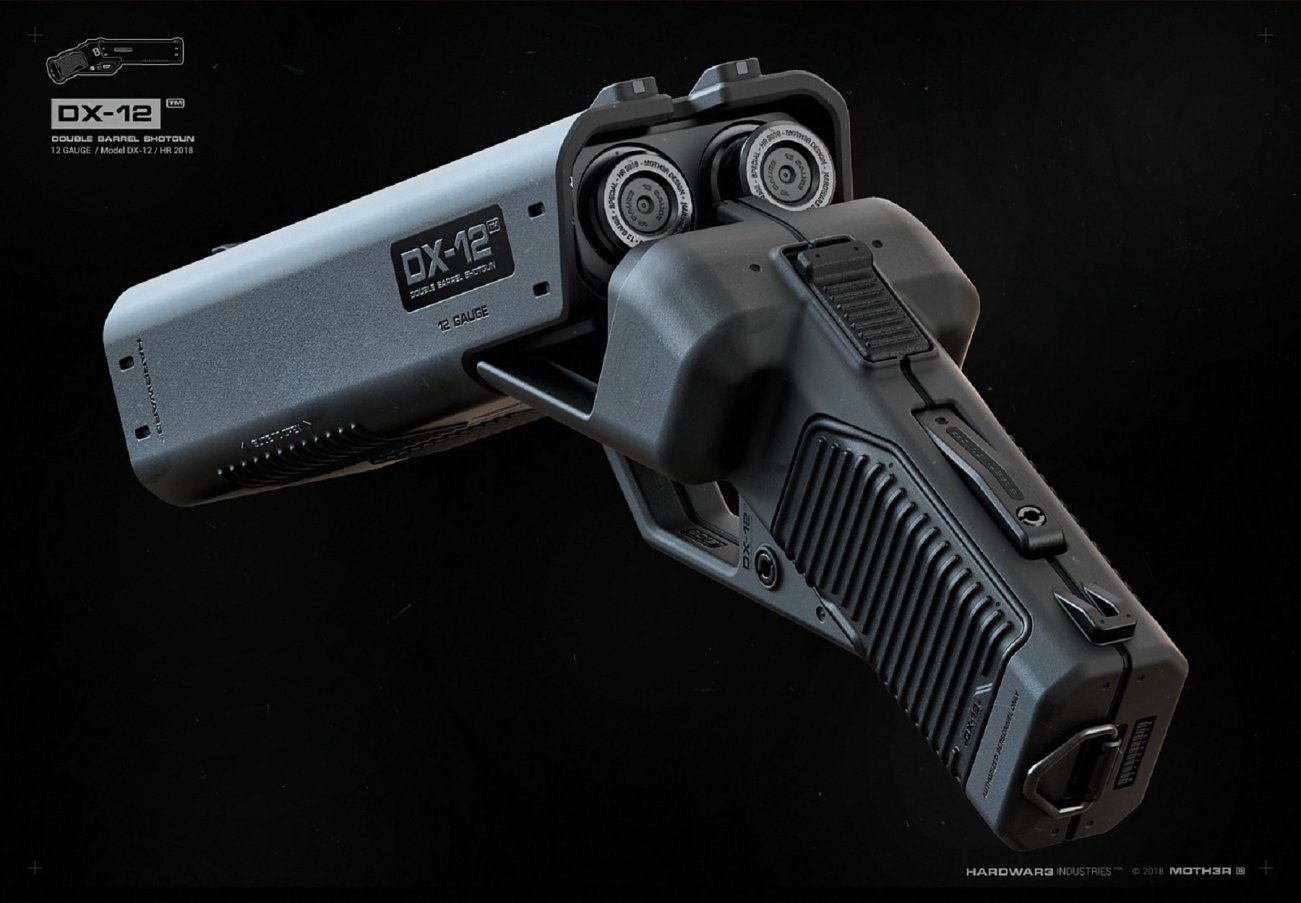 Unlike the pistols it has been compared to, the “Punisher DX-12” has a ton of questionable design decisions and ergonomic quirks that would make it a danger to the shooter and anyone around.

Here’s What You Need To Remember: The DX-12 Punisher shotgun looks sleek, futuristic, and ergonomic. But function should trump form – and there are serious questions about the DX-12’s ability to function at all.

A render of a double-barrel shotgun by “HARDWAR3 INDUSTRIES” got some attention last year due to its futuristic design and boxy shape, which some say resembles the ubiquitous Glock pistols. But unlike the pistols it has been compared to, the “Punisher DX-12” has a ton of questionable design decisions and ergonomic quirks that would make it a danger to the shooter and anyone around.

It’s important to remember that the DX-12 is only a concept; the design is clearly not final. Switches on the shotguns change position and shape depending on which angle the shotgun is viewed from. In this render the barrel or fire-mode selection switch is on the right side of the shotgun, in another render it is on the left side.

While this could be explained as being different for left and right handed shooters, this points to incredibly poor design.

Modern firearms are designed to be ambidextrous. This is easier than producing two different models for left-handed and right-handed people. It saves training time, simplifies the manual of arms, and eliminates the need to produce two different frames with different cutouts for controls.

This is accomplished by either having mirrored controls, the same control being present on both sides of the firearm, or having the ability to switch the control from one side to another with minor modification.

Of course, the positioning of such a switch on the side of the shotgun is poor design to begin with. With a standard firing grip, it would only be possible to actuate the switch with the thumb of the firing hand or the support hand. Traditional side by side shotguns use far superior solutions. Some put the barrel selection switch on top of the shotgun, an intuitively ambidextrous position. Old style shotguns use dual triggers, one for each barrel. Others some feature a selector inside the trigger guard, a less safe, but faster solution. All of these solutions are ambidextrous and can be actuated with a firing grip on the shotgun, unlike the DX-12.

The markings on the switch itself also are poorly designed. The switch is labeled “Select III”. Modern firearms design has moved away from the use of words or even abbreviations in the labeling of parts to make firearms “language universal.”

A classic example of this is how Heckler and Koch moved from labeling their fire-selectors S-E-F, from the German words for Safe (Sicher), semi-automatic (Einzelfeuer), and fully-automatic (Feuerstoss) to a simple pictogram-based selector. Most traditional shotguns use simple dots on their barrel selector: aesthetic and language universal.

The way the shotgun locks shut and opens is also different, and not in a good way. While there is no manual for the DX-12, its operation can be inferred from the markings on the shotgun. There is a ribbed area labeled “slide to open” under the barrels of the shotgun, and a large switch on top. Presumably, one must push this switch forwards while also sliding the front of the shotgun forwards to break open the shotgun.

Why the designer decided to make opening the shotgun a two-step process boggles the mind. Break-open firearms of all kinds, from double barrel sporting shotguns to the venerable M79 grenade launcher all use a simple lever that rotates to the side to open: a simple, one-handed, ergonomic, and fast process. The two-step process the DX-12 requires is slower, requires a more difficult motion with the thumb, and requires two hands.

The locking mechanism itself is suspect as well. The opening lever on a shotgun usually engages or disengages locking surfaces at the top or on the sides of the shotgun so the barrels remain locked up tight.

The DX-12 appears to have such a lock at first, with a tab in the receiver going into a slot in the barrel portion. But no locking surfaces are present in that tab, nor on the sides of the shotgun. This implies the shotgun locks at the hinge, making the entire design mechanically suspect.

To add insult to injury, once the shotgun is broken open, there are no extractors or ejectors present on the model. When a shotgun fires, the pressure of firing expands the shells and makes them stick to the walls of the chamber. Extractors solve this problem by locking onto the rims of the shells and extracting them from the chamber so they can be removed by hand. Ejectors take this a step further and use spring pressure to throw fired shells out of the chamber for additional speed.

The DX-12 has neither of these, so a user would be forced to pry fired shells out of the shotgun with a screwdriver or similar implement, significantly slowing down the reload process.

Speaking of shells, the DX-12 appears not to fire standard 12 gauge ammunition, despite its labeling. The shells depicted with the gun feature a significantly thicker rim and a recessed primer pocket. This would make the ammunition proprietary to the DX-12. The DX-12 would be also unable to fire regular shotgun rounds unless the shotgun dynamically changed the breech face geometry depending on the type of shell loaded, a feature that would add additional complexity to what should be a simple gun.

A toggle safety on the grip is an extremely poor idea, as it may be activated or deactivated when the shooter merely shifts their grip on the firearm. It also negates one of the advantages of a Glock-style system, the ability to simply pull the trigger and fire without worrying about any additional mechanical safeties on the firearm.

While the Glock was provided with an additional manual safety for the American Modular Handgun System contract and for certain foreign contracts, the majority of Glock users worldwide (including those in U.S. Special Operations Forces) use the Glock as intended, with only the trigger safety.

The shotgun’s sights are also poorly thought out. Whether sights are even needed or used on a short, pistol grip only double barrel shotgun is questionable, but even then a simple front bead sight or a ghost ring setup would be more precise and accurate than the wide, imprecise, notch and post sights provided on the DX-12. Notably, the shotgun lacks any provision for mounting any kind of reflex sight. Reflex sights would be ideal for fast, precise shooting.

The latest shotgun adopted by the American and British militaries, the Benelli M4, has both a ghost ring sight and a Picatinny rail to allow for the mounting of reflex optics. The DX-12’s sighting systems are a significant step back compared to that.

Interestingly, the DX-12 appears to be fitted with a screw-in choke in both barrels. While a nice feature, the choke appears to require a proprietary tool to remove and install. Chokes are very simple technology: a tube that constricts the flow of shot through it. Thus, making the choke proprietary would only serve to limit the DX-12’s appeal.

In comparison to the Mossberg Shockwave, the gun looks supremely uncomfortable to hold for an extended period of time. To make the problem worse, the additional material around the barrels makes the DX-12 extremely bulky, and if filled in with working parts or a recoil mitigation mechanism would make the gun very front heavy, only compounding the problems with the grip.

While the DX-12 Punisher shotgun concept may appear aesthetically pleasing, practically every aspect of its design has been done better by existing shotguns on the market today. If made, it would be dangerous, bulky, unergonomic, and require the user to buy proprietary ammunition and chokes. Some concepts are better left in the virtual world.

Charlie Gao studied Political and Computer Science at Grinnell College and is a frequent commentator on defense and national security issues. This article first appeared in 2019.