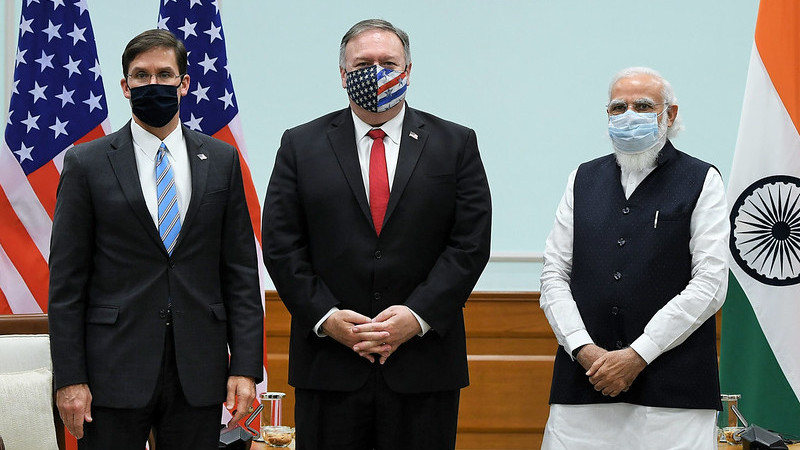 While the world was engrossed in an intensely fought battle for the Oval office between the Democratic candidate Joe Biden and the incumbent US President Donald Trump, far removed from the partisan politics of the US Capitol, a diplomatic event of significant importance took place in New Delhi.

The occasion was the third edition of the India-US “2+2” Ministerial dialogue which was held in New Delhi on October 27, 2020.  While heavily covered in the Indian media, the American media gave it a miss.

The “2+2” Ministerial Dialogue is a relatively recent innovation in India-US relations. The mechanism involves the ministers of Defence and Foreign relations of the two countries meeting jointly to discuss vital aspects of their diplomatic and strategic partnership.

The US delegation was led by Secretary of State Mike Pompeo and the then Defence Secretary Mark Esper while the Indian side was represented by Defence Minister Rajnath Singh and External Affairs Minister S. Jaishankar. On the agenda was the enhancement of the India-US Global Strategic partnership, deepening of the military engagement between the two countries, access to cutting edge US defence hardware and co-ordinated response to the global COVID-19 pandemic.

From the Indian perspective the dialogue mechanism provides a framework for institutionalizing co-operation between the military and diplomatic establishments of both countries and provides a forum for better understanding of each others security compulsions and co-ordination of diplomatic moves on the world stage.

The “2+2” mechanism also addresses a deep-seated grievance in the Indian strategic establishment, that the US State Department and the CIA have historically been favourably disposed towards Pakistan given the long-term relationships built with the Pakistani military-intelligence complex during the Cold War, the anti-Soviet Afghan jihad, and Pakistan’s position as a frontline state during the War on Terror. Conversely, the Pentagon has been much more favourably disposed towards the Indian assertion of Pakistan being a global hub of Islamic terrorism, as it has had to fight against ISI-backed Taliban insurgents for the last two decades in Afghanistan. The burgeoning US-India military-to-military relations are a case in point with the Pentagon keen on engaging with the Indian military at all levels.

From the US perspective, the dialogue provides a mechanism to enhance institutional understanding between the foreign and military establishments of both countries and to ensure that as India emerges as a counter-weight to China in the Indo-Pacific while balancing China’s growing influence in the Indian Ocean.  The US backing of India’s position since the current military stand-off with China began along the Line of Actual Control in Ladakh, was most conspicuous with Secretary of State Mike Pompeo unambiguously supporting India’s position after the talks.

A key concrete takeaway from the talks was that India finally signed the three foundational logistics & communication agreements (BECA, LEMOA, COMCASA) which form the basis of India-US defence co-operation framework.   The efficacy of the 2+2 dialogue mechanism can be gauged from the fact that barely a month after the discussions the US allowed Indian Navy to lease two MQ-9B Sea Guardian surveillance drones, for training and familiarization purposes while India firms up a much larger order of 24 such drones via the Foreign Military Sales route.  Interestingly, the Sea Guardian drones are based out of INS Rajali in Tamil Nadu in southern India, the same naval base where the Indian Navy bases its Boeing P-8I anti-submarine warfare and surveillance planes acquired from the US.

The joint statement at the end of the 2+2 talks also mentioned Afghanistan rather prominently.  For the US a face-saving withdrawal from Afghanistan is a strategic priority. For both the US and India, an Afghanistan dominated by the Taliban, and with a security vacuum after the withdrawal of ISAF forces is a nightmare scenario, with New Delhi having experienced taking on veterans of the Afghan war in Kashmir after the Soviet withdrawal from Kabul in 1989 and 9/11 deeply imprinted in the US consciousness.  India is also keen to preserve the leverage and goodwill it has accrued due to its infrastructure projects which have impacted the common Afghan populace significantly. Within Afghanistan significant sections of the city-dwelling populace who have enjoyed a sort of peace-dividend are worried about the withdrawal of Western forces and the blocking of Western funding should a radical Islamist regime take power in Kabul.

However, the enhanced India-US co-operation is not without its challenges for India.  In the Indian context, the Indo-US alliance will primarily impact three key foreign relationships of India

India- Russia relationship – Russia will be wary of US overtures to India.  The recent statement by Russian Foreign Minister Sergei Lavrov, exemplifies the disquiet in the Kremlin as the US aims to pull India into an ever-closer strategic embrace. As India seeks to diversify its weapon purchases and aggressively develop a domestic arms industry Russia’s pre-eminent position as India’s defence partner will take a hit. India will seek to compensate for this by partnering with Russia for high-end strategic systems like the lease of the second Akula class nuclear submarine, additional orders for the S-400 strategic air defence systems and the emergency purchase of Mig-29 fighter aircraft to shore up dwindling numbers in its air force.  On the diplomatic front, there will be increasing pressure from the US at India to abandon its historic independent foreign policy and to line up Western position in the diplomatic arena.  It will be a significant challenge for Indian diplomats to keep a balance between the Russian & US relationships.

India- Pakistan relationship – Pakistan will gradually lose its importance in the American calculus especially as the US engagement in Afghanistan winds down.  To compensate for the lack of American and Saudi largesse, Pakistan will further embrace the dragon. China will use Pakistan as a proxy to needle India militarily. Pakistan currently smarting from India’s sudden move to abrogate Article 370 and end autonomy for the Kashmir province, may embark on a small-scale military operation either jointly with China or with Chinese backing to alter the status quo in Kashmir.  Given India’s new policy of defensive offence any such conflict may not stay limited to the areas along the LoC and it may hit back at targets in depth and also escalate the conflict to the air & naval domains.

India-China relationship –   China seems to have taken an aggressive stance with neighbours with which it has disputes (India, Taiwan, Japan). This seems like a tactic by President Xi Jinping to channelize the simmering discontent among the Chinese masses due to the outbreak of Wuhan Coronavirus outwards towards its neighbours and keep a lid on dissent within the PLA and the Chinese Communist party.  With India de-coupling the economies of India and China along with the Make in India initiative, it will lead to a correcting of trade imbalance India and China.  The stand-off initiated by China in Ladakh has effectively become a stalemate with a resolute Indian government and Army confronting the Chinese dragon head-on.  The longer the stand-off continues, more will be the deepening of India-US partnership.  If India and China can resolve the current stand-off and settle their boundary dispute along the inhospitable Himalayan regions, then the competition between the two countries can be limited to the economic and technological domains.

The India-US partnership is driven by shared goals and concerns about developments at the global stage.  How the relationship evolves under the incoming Biden-Harris administration is to be seen, as Joe Biden may take a less stringent approach to the trade war with China than Trump.  From the Indian perspective PM Modi has pursued a muscular foreign policy based on achieving national objectives and the deepening of the US – India engagement helps him achieve the target of growing India to a $5 trillion academy.  The 2+2 dialogue provides a bedrock on which to grow the relationship further.

*Varun Chaturvedi is a technology professional based out of Canada with an avid interest in international affairs, financial markets, geopolitics, and security issues with a focus on the Indian sub-continent, Afghanistan, and the Middle East. He holds an MBA with a major in International Business.  Varun resides in Toronto.