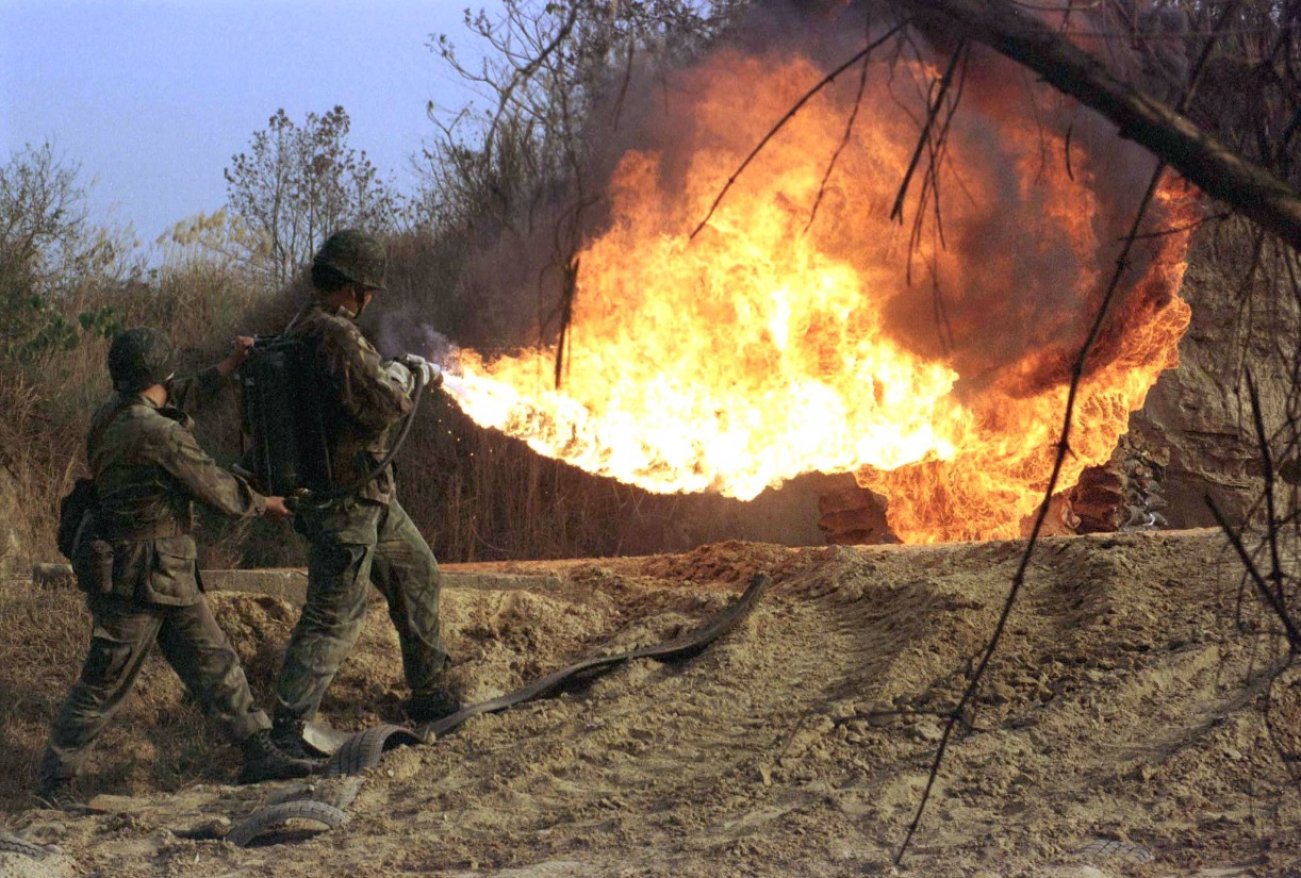 Here’s What You Need to Remember: “Flamethrower crews needed nerves of steel to approach to within pistol range of the enemy positions,” McNab writes. A single bullet penetrating the propellant tank could result in a devastating explosion.

“All weapons are, by their very nature, ghastly in purpose,” Chris McNab writes in the introduction of his new book The Flamethrower, “but there is something uniquely awful and inhumane about the flamethrower.”

Yes, flamethrowers are awful. Their role in wartime — especially in the 20th century — reveals something profoundly disturbing about humanity. The gradual disappearance of flame weapons from the arsenals of most countries is, from a certain point of view, a hope-inspiring thing.

And McNab’s slim volume, the latest in a long series of weapons monographs from Osprey Publishing, eloquently conveys the flamethrower’s awfulness, plumbs its disturbing implications and celebrates its slow demise. All in evocative prose.

Really, The Flamethrower is a masterpiece of the military reference genre.

“Fire is popularly and quite logically held as one of the worse ways to die,” McNab writes. “It is not quick, the victim taking long seconds and even minutes to succumb, as flesh, nerve muscle and eventually organs are charred to destruction. Those who have observed such deaths give chilling accounts of the animal-like howls of the dying.”

Thus establishing the philosophical and moral milieu of flame weapons, McNab proceeds to briefly recount their history — from Old Testament times through their heyday in World War I and World War II … and right into the present day.

But the world wars are the focus. “They were ideal devices for trench and emplacement assault, incinerating entire trench sections or bunker structures in intense blasts of oily flame,” McNab writes. Besides inflicting terror and burning, flamethrowers’ ravenous fire sucks the oxygen from enclosed spaces, potentially suffocating occupants who don’t fry to death.

Technology kept pace with need. The Germans were the first to develop flame weapons that were light enough for a single soldier to haul around the battlefield. The M.1912 established the basic layout that all major flamethrower designs would subsequently copy — a backpack containing a tank of fuel and a separate tank of propellant connecting to a handheld wand accompanied by some sort of ignition system.

Through much bloody trial and error, armies refined their uses of flame weapons. They learned to use highly viscous fuel mix in order to project a more concentrated stream of flames over greater distance — and to avoid the awful fate that befell one French fire regiment in June 1916. A sudden wind pushed the French fire barrage back onto the operators, killing at least 25 men.

“In a single day, 15 January 1943, USMC engineers managed to wipe out three tough enemy bunkers in just 20 minutes using flamethrowers,” McNab writes. “In one incident, it was noted that two Japanese troops dropped dead outside the torched bunker, without obvious major injury.

“This effect, it was discovered, was because the lethal effects of carbon monoxide poisoning could endure in the bloodstream for up to 10 minutes after the attack, felling enemy soldiers even when they thought they were safe.”

So gruesome were the flamethrower’s effects that troops on both sides of 20th-century conflicts treated any flame operators as dishonorable and below contempt. Captors often summarily executed surrendering flamethrower crews.

After the total wars of the 20th century, flame devices began to disappear from battlefields. “Vietnam was the last major conflict in which Western powers significantly used flamethrowers against human targets,” McNab recalls. “For times were changing. Television media was broadcasting to the world, on a nightly basis, the horrific realities of war.”

Along with napalm, flamethrowers “came to represent the most inhumane side of warfare.” The Pentagon banned the tactical use of flame weapons starting in 1978. Today the Chinese army still carries flamethrowers into battle, but most other armies have relegated the weapons to strictly nonlethal use — clearing vegetation, for instance.

McNab ends his masterwork with a sympathetic flourish, meditating first on the victims of flame weapons — and then on the weapons’ operators. “Flamethrower crews needed nerves of steel to approach to within pistol range of the enemy positions,” McNab writes. A single bullet penetrating the propellant tank could result in a devastating explosion.

“Regardless of the technology or tactics, it still took a brave man to strap heavy, bulky tanks of fuel and gas onto his back and step out into the line of fire.”

This article by David Axe originally appeared at War is Boring in 2015 and is being republished due to reader interest.