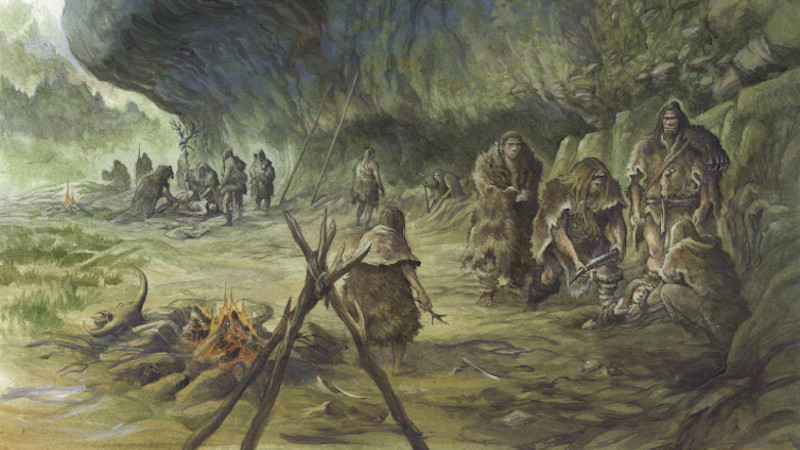 Was burial of the dead practiced by Neandertals or is it an innovation specific to our species? There are indications in favour of the first hypothesis but some scientists remain sceptical. For the first time in Europe, however, a multi-disciplinary team led by researchers at the CNRS and the Muséum national d’histoire naturelle (France) and the University of the Basque Country (Spain) (1) has demonstrated, using a variety of criteria, that a Neandertal child was buried, probably around 41,000 years ago, at the Ferrassie site (Dordogne). Their study is published in the journal Scientific Reports.

Dozens of buried Neandertal skeletons have been discovered in Eurasia, leading some scientists to deduce that, like us, Neandertals buried their dead. Other experts have been sceptical, however, given that the majority of the best-preserved skeletons, found at the beginning of the 20th century, were not excavated using modern archaeological techniques.

It is within this framework that an international team (1) led by paleoanthropologists Antoine Balzeau (CNRS and Muséum national d’histoire naturelle, France) and Asier Gómez-Olivencia (University of the Basque Country, Spain), analysed a human skeleton from one of the most famous Neandertal sites in France: the La Ferrassie rock shelter, Dordogne. After six Neandertal skeletons were discovered at the beginning of the 20th century, the site delivered a seventh between 1970 and 1973, belonging to a child of around two years old. For almost half a century, the collections associated with this specimen remained unexploited in the archives of the Musée d’archéologie nationale.

Recently, a multidisciplinary team, assembled by the two researchers, reopened the excavation notebooks and reviewed the material, revealing 47 new human bones not identified during excavation and undoubtedly belonging to the same skeleton. The scientists also carried out a thorough analysis of the bones: state of preservation, study of proteins, genetics, dating, etc. They returned to La Ferrassie in the hope of finding further fragments of the skeleton; although no new bones were discovered, using the notebooks of their predecessors, they were able to reconstruct and interpret the spatial distribution of the human remains and the rare associated animal bones.

The researchers showed that the skeleton had been buried in a sedimentary layer which inclined to the west (the head, to the east, was higher than the pelvis), while the other stratigraphic layers of the site inclined to the north-east. The bones, which were relatively unscattered, had remained in their anatomical position. Their preservation, better than that of the bison and other herbivores found in the same stratum, indicates a rapid burial after death. Furthermore, the contents of this layer proved to be earlier than the surrounding sediment (2). Finally, a tiny bone, identified as human by the proteins and as Neandertal by its mitochondrial DNA, was directly dated using carbon-14. At around 41,000 years old, this makes it one of the most recent directly dated Neandertal remains.

This new information proves that the body of this two-year-old Neandertal child was purposefully deposited in a pit dug in a sedimentary layer around 41,000 years ago; however, further discoveries will be necessary to understand the chronology and geographical extension of Neandertal burial practices.

(2) Dated by thermoluminescence. The result indicates how long it is since the sediment last saw light and therefore the date of the burial.