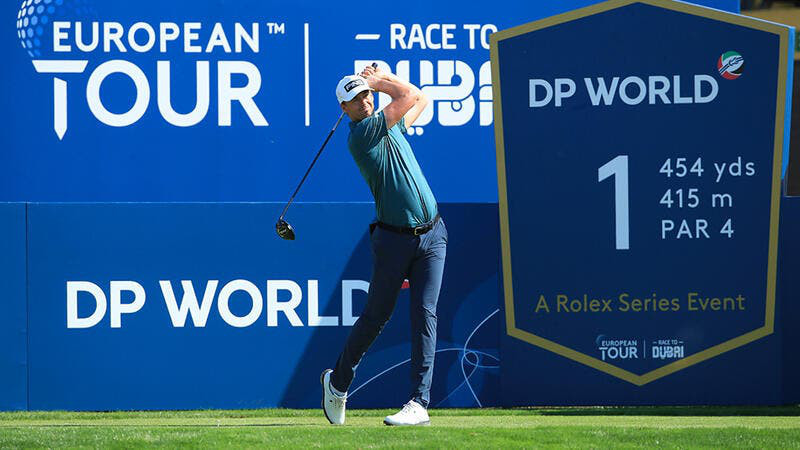 A back nine of 32 propelled Victor Perez to an opening five under par 67 and a one shot lead after the first day of the DP World Tour Championship, Dubai.

Frenchman Perez went out in one under and quickly picked up shots on holes ten and 11 before further gains on 14 and 17 saw him get to five under, and he plans on maintaining an aggressive approach for the rest of the week.

“In the position I’m in, I have nothing to lose and I have everything to gain,” said Perez, who sits in sixth place in the Race to Dubai. “For me it’s a ‘go-for-it’ mentality that I have to keep for four rounds. Obviously, you still have to play proper golf and hit the right shots and sometimes take your medicine, but again, I have nothing to lose, so it’s a matter of making a lot of birdies.”

Fitzpatrick, who won this title in 2016 and has two additional top tens to his name, continued to play well around the Earth course as he made six birdies in his four under par round.

“It was a good day and I felt like I played solid all over,” said Fitzpatrick. “It’s a strange one because I got told this course was for bombers before I first came here but I’ve always found it to my liking. I think the big thing for me is the greens are always fantastic and I love putting on greens this fast.”

“I didn’t drive it great today, so I was in a bit of trouble here and there, but we took our punishment,” said MacIntyre, who began with three consecutive birdies. “When I’m in position, I’m attacking pins, and that’s what you’ve got to do –  you go at it. It’s a golf course that I like. It suits my eye, so I’m just going to try and keep doing what I’m doing.

“My putting has come on leaps and bounds in the last eight weeks. So if you’ve got the putter going, it sometimes doesn’t matter where you hit it.”

Tournament debutant Viktor Hovland carded a one under par 71, as too did the likes of Thomas Pieters, Christiaan Bezuidenhout and Andy Sullivan to sit in a group of eight players four strokes back, while American Collin Morikawa, who is third in the Race to Dubai, opened with a level par 72 in his first competitive round at Jumeirah Golf Estates.