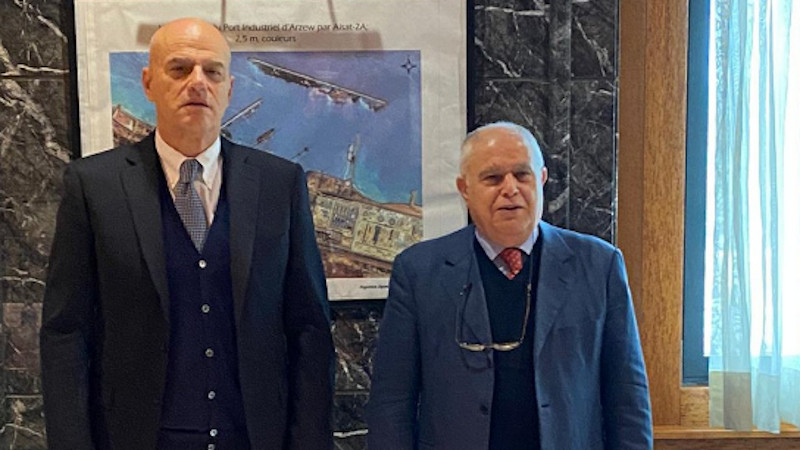 The Algerian Minister of Energy, Abdelmadjid Attar, met the Chief Executive Officer of Eni, Claudio Descalzi, today in Algiers to take stock of the company’s activities in the country, future projects and to discuss the energy transition, central to Eni’s new strategy.

Claudio Descalzi also met with the CEO of Sonatrach, Toufik Hakkar. During the meeting, an agreement was signed detailing the roadmap for a new hydrocarbon contract in the southern area of the Berkine Basin, under the aegis of the new Algerian oil law which came into force in December 2019.

The agreement falls within the memorandum of understanding aimed at collaboration in the upstream sector signed last July and has the goal of creating a new gas and oil development hub in the region through synergies with the existing assets of MLE-CAFC (Block 405b).

Toufik Hakkar and Claudio Descalzi agreed to implement a program for relaunching exploration and development activities in the area, through optimizing existing infrastructures, and to accelerate the speed with which its solutions are brought to the market by leveraging on the local content, replicating the model already adopted successfully for the “Berkine Nord” project.

Both the expansion of the BRN photovoltaic plant, first completed at the end of 2018, and the creation of a new photovoltaic plant at the MLE site, which will supply clean energy to the existing gas treatment plant while reducing emissions resulting from self-consumption of gas, were also verified.

These initiatives are part of the strategy that Eni and Sonatrach are developing using common assets, aimed at combining economic, financial and environmental sustainability.

Both companies share a target to reduce carbon footprint of natural gas production through the improvement of the energy efficiency of processes, the electrification of treatment plants and the abatement of fugitive methane emissions, through systematic and structured monitoring campaigns.

Toufik Hakkar and Claudio Descalzi also reiterated their willingness to collaborate in other areas through staff training, research and development, technology transfer, renewable energy and other fields linked to the gas and oil products markets.

At the end of the meeting, Eni’s CEO thanked Sonatrach for its consistent support and friendly and successful relationship: “Today’s agreement testifies to the commitment of Sonatrach and Eni to expand their partnership in Algeria, in line with their shared strategy of the accelerated development of their projects and pursuing their common objectives of decarbonisation as part of their commitment to achieve long-term carbon neutrality, reducing and compensating for climate-changing gas emissions up to zero.”

Eni has been present in Algeria since 1981 where currently operates 32 mining permits and where its equity production is 80,000 barrels of oil equivalent per day, making it the most important international company operating in the country.

The article Algerian Minister Of Energy, And CEO Of Sonatrach Meet CEO Of Eni appeared first on Eurasia Review.