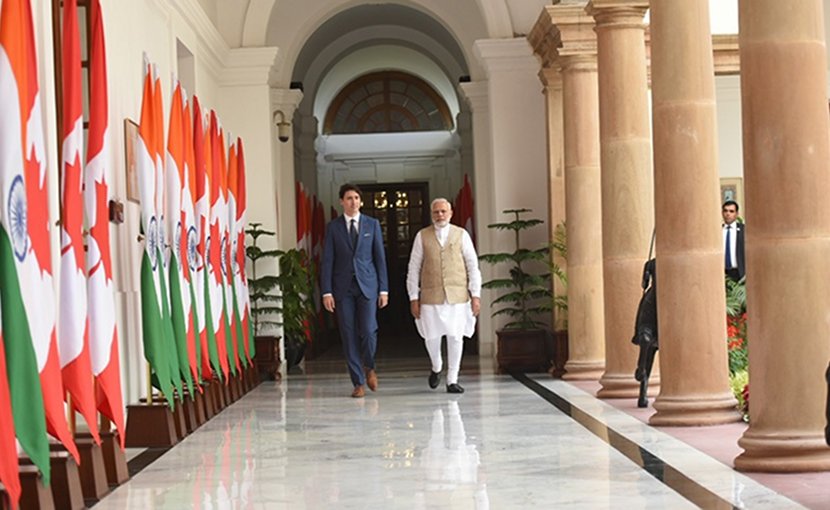 Geopolitical shifts during the Covid-era is justifying a closer convergence of national perspectives between India and Canada. It remains now to align the bilateral’s common interests and values, with common goals.

On 17 November the third round of India-Canada Track 1.5 Dialogue, comprising senior diplomats, officials and independent experts, will be addressed by Canadian Foreign Minister François-Philippe Champagne and External Affairs Minister S. Jaishankar on a virtual platform.

The ministers will deliberate on and define the role of India and Canada in the post-Covid-19 world. This will be followed by a round table of scholars and experts who will delve into various facets of the strategic partnership linking the two countries, the new geo-economics of the Indo-Pacific and digital cooperation, particularly in the areas of fintech and artificial intelligence.

This promising interaction represents a major, deliberate endeavour to boost the bilateral relationship, helping it to cope with challenges of the third decade of the 21st century. It demonstrates how far the two governments have progressed in just two years, following the setback caused by the differences over the Khalistan issue that surfaced both before and during Prime Minister Justin Trudeau’s week-long visit to India in February 2018. And this dialogue creates a template for a judicious merger of G2G diplomacy with public diplomacy, and the maturing role of think tanks in the conduct of foreign policy today.

The 1.5 Track Dialogue has been piloted since February 2018 by two dynamic think tanks – Gateway House: Indian Council on Global Relations and Canada’s Centre for International Governance Innovation (CIGI). Their deep three-year-long collaboration has encouraged the governments to focus on the immediate opportunities available in investment, technology and geopolitical rearrangements.

The real turning point came at the dialogue’s second round, held in Mumbai in November 2019, a month after the parliamentary elections in Canada resulted in Trudeau’s return to power, albeit with a reduced number of MPs for his party. The new government in Ottawa preferred to be more cautious on sensitive bilateral issues, and more receptive to New Delhi’s view that the larger geopolitical shifts justified a closer convergence of national perspectives. External Affairs Minister Jaishankar’s visit to Canada in December 2019 initiated a new phase, consolidating mutual understanding. It laid the ground for more frequent interactions this year, including two virtual meetings between the prime ministers and four meetings between the trade ministers conducted digitally.

Common challenges of the Covid era accelerated the momentum. Canada’s travails with China, starting with the arrest of Meng Wanzhou, Huawei’s chief financial officer in Canada in December 2018 and the ‘hostage diplomacy’ practiced by Beijing which arrested two Canadian nationals, has caused huge stress in Canada-China relations, turning Canadian public opinion against China. This opened the door to a closer relationship with India, with Canadian sympathy for India’s summer of troubles with China’s aggressive intrusions across the Line of Actual Control (LAC) in eastern Ladakh since April 2020.

In this backdrop, developments concerning the Indo-Pacific – escalating discontent against Beijing’s aggressive behaviour, strengthening of the Quad and the growing interest of France, Netherlands and Germany to be active players in the region – are of immense relevance to Ottawa. The forthcoming dialogue can deepen the India-Canada convergence on this issue.

The other major focal point will be the economic and technological cooperation between the two countries. Foreign policy observers highlight the importance of recent positive trends, as below:

b) Canada’s cumulative investment, including FDI and by Canadian Pension Funds, is a substantive C$55 billion, according to diplomatic sources. Addressing virtually the ‘Invest India’ conference in Canada on 8 October, PM Modi pointed out that mature Canadian investors have been present in India for many years and assured them that no barriers would come in their way.

c) Indian students are increasingly being educated in Canada, and a quarter million of them spent an estimated $5 billion in tuition fees and other expenses, a solid contribution to the Canadian economy.

e) The Indian diaspora in Canada is now 1.6 million-strong, representing over 4% of the country’s total population. Like their brethren to the south, they are increasingly mainstreamed in Canadian politics.

The principal areas of bilateral cooperation are best defined by five Es: Economy, Energy, Education, Entertainment and Empowerment of women. In particular, the digital domain holds immense potential, given Canada’s proven assets in technology – especially its large investment in Artificial Intelligence – innovation and capital resources on the one hand and India’s IT achievements, expanding digital payment architecture and policy modernization.

Divided by geographical distance but united through clear common interests and values, India and Canada will begin their steady journey of progress, this time with a laser focus on common goals as well.

*About the author: Rajiv Bhatia is a scholar-diplomat who served as India’s Ambassador in five countries. He was also the Consul General in Toronto from 1994-1998.

Source: This article was published by Gateway House and originally appeared in The Hindu.