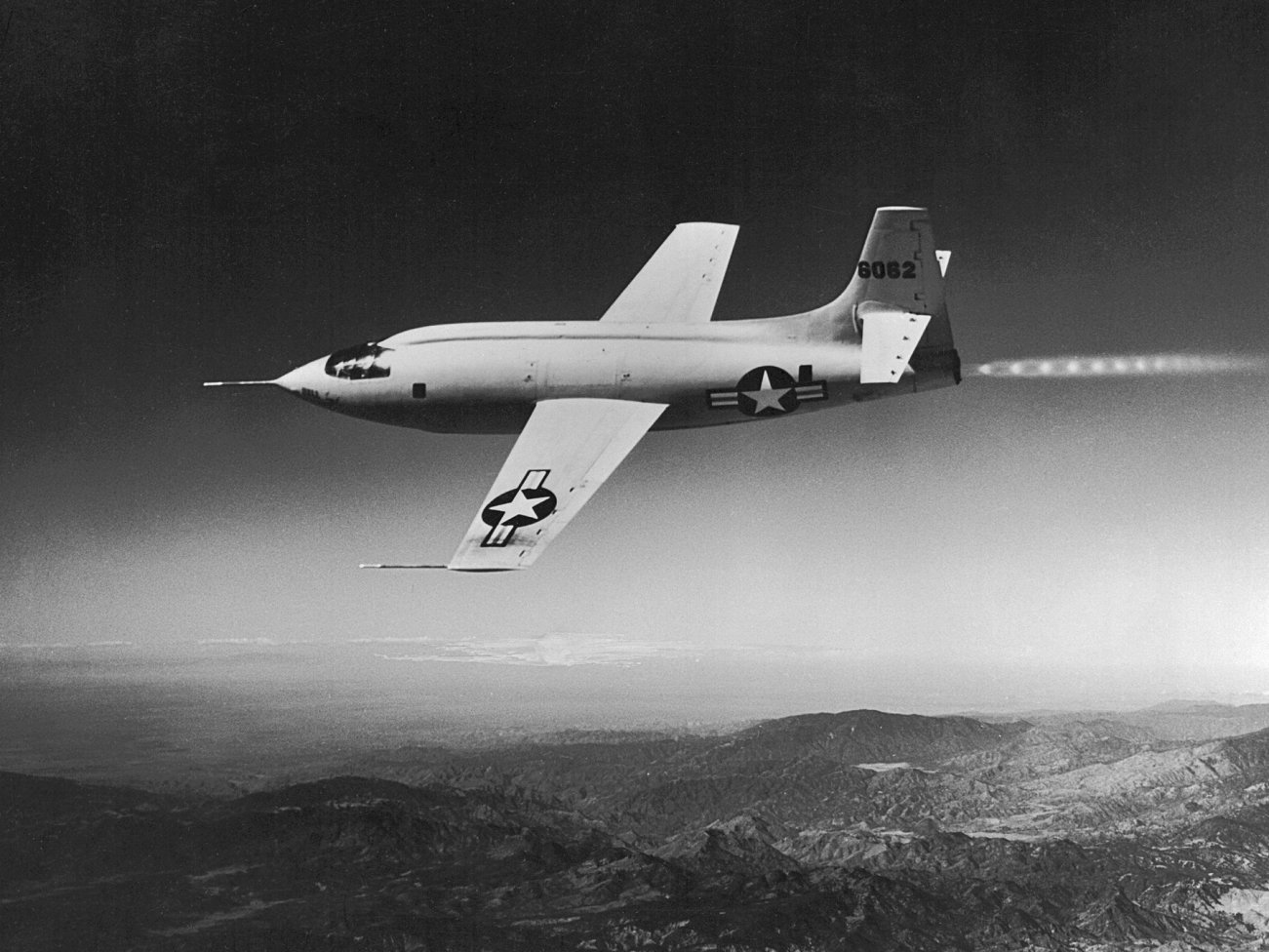 The X-1 and pilot Chuck Yeager both made significant contributions to American flight knowledge.

Here’s What You Need To Remember: The plane was literally modeled after a .50 caliber bullet – one of the only known objects that could maintain a stable flight path at supersonic speed.

The X-1, manufactured by Bell Aircraft Corporation was the crowning achievement of post-World War II American aeronautics. It was the first of the X-planes—a series of rocket and jet-powered aircraft that were not intended to be put into production, but rather were used for research purposes. The flight data the X-series gathered was used to improve future airplane designs.

During the 1930s and 1940s, aircraft approaching the transonic range, that is from Mach 0.8 to Mach 1 experienced a number of negative flight characteristics, including excessive turbulence, unpredictable changes in trim, and a general loss of flight control. In order to more fully understand how airframes behaved in the transonic range, the X-1 was developed to exceed the speed of sound.

The First of the X-Planes

The bullet-shaped fuselage was optimized for speed—it was modeled on a 0.50 caliber bullet, which traveled supersonically and was known to be stable at Mach 1 speeds and higher. Rather than aerodynamic swept wings, the X-1 had more conventional straight wings, though they benefited from being decidedly thinner compared to other straight wings of the era.

Unlike other jets, the airframes of the X-1 program were not powered by jet engines, but by liquid-fuel rocket engines. Rather than using early jet engines at previously-unattained speeds, rocket engines allowed the X-1 to achieve the necessary Mach 1+ speed without risking engine damage and jeopardizing pilot safety.

Though the X-1 rocket-powered planes could take off conventionally from runways, they were generally dropped-launched from a specially-modified B-50 bomber. Air launches allowed the X-1 to conserve more rocket fuel by skipping the fuel-intensive takeoff portion of flight all together.

Fastest Man in the Sky

Leading up to the first Mach 1 flight, X-1 test pilots conducted a series of flights that slowly approached Mach 1 to more fully understand the X-1’s flight characteristics in the transonic range. Capt. Charles E. “Chuck” Yeager flew at Mach 0.85 in late August 1947, and nearly broke the sound barrier, flying at Mach 0.997 on October 10.

As if breaking the sound barrier wasn’t a difficult enough task itself, Yeager had broken two ribs the night before the scheduled Mach 1+ flight. A 1987 article by Yeager recounts the gifts he received from the X-1 flight team prior to the Mach 1+ flight.

“XS-1 team presented me with a big raw carrot, a pair of glasses and a length of rope. The gifts were a whimsical allusion to a disagreement I’d had the previous evening with a horse. The horse won.” Broken ribs notwithstanding, Yeager boarded the rocket plane, with difficulty. After being dropped by the B-50 at 43,000 feet, he hit the ignition button.

On October 14 1947, Chuck Yeager became the first pilot to fly supersonically, flying at Mach 1.06 and just breaking the sound barrier. Immediately after his record-setting flight, all data gathered during the flight was categorized as Top Secret, and the truth about his flight was withheld for several months.

The X-1 and pilot Chuck Yeager both made significant contributions to American flight knowledge. NASA says that the X-1 program resulted in a “wealth of aeronautical technical information,” and was essential to understanding Mach 1+ flight. “Without the more complete technical understanding of the dynamics of high-speed flight that the X-1 provided, industry and science would have been severely handicapped in their efforts to produce evolutionary aircraft.”

Caleb Larson is a defense writer for the National Interest. He holds a Master of Public Policy and covers U.S. and Russian security, European defense issues, and German politics and culture. This article first appeared several months ago.