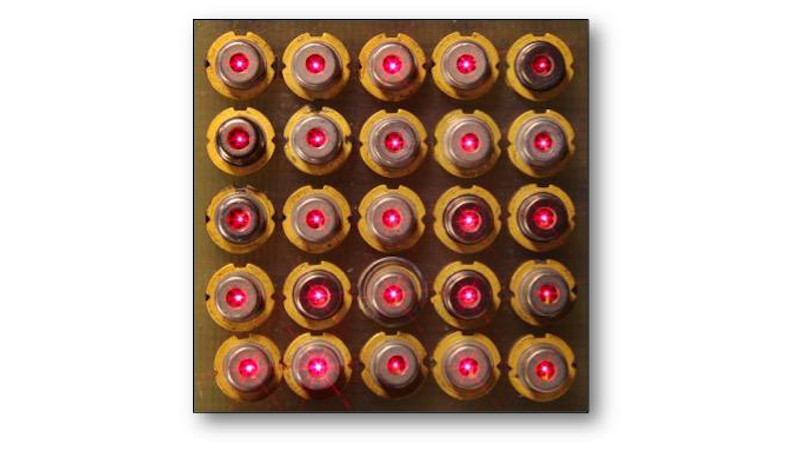 Researchers at the George Washington University have developed a new design of vertical-cavity surface-emitting laser (VCSEL) that demonstrates record-fast temporal bandwidth. This was possible by combining multiple transverse coupled cavities, which enhances optical feedback of the laser. VCSELs have emerged as a vital approach for realizing energy-efficient and high-speed optical interconnects in data centers and supercomputers.

VCSELs are a vital class of semiconductor laser diodes accompanying a monolithic laser resonator that emits light in a direction perpendicular to the chip surface. This class of lasers is gaining market importance given their compact size and high optoelectronic performance. As miniaturized lasers, they are used as an optical source in highspeed, short-wavelength communications and optical data networks. Dense traffic and high-speed transmission are key requirements for smart sensor applications in automotive or in data communications, which are enabled by compact and high-speed VCSELs. However, the 3-dB bandwidth, known as the speed limit of VCSELs, is limited by thermal effects, parasitic resistance, capacitance and nonlinear gain effects.

Direct modulation of VCSELs cannot exceed about 30 GHz due to nonlinear optical amplification effects known as gain relaxation oscillations. This invention introduces a revolutionary novel VCSEL design. Since feedback inside the laser needs to be carefully managed, researchers introduced a multi-feedback approach by combining multiple coupled cavities. This allowed them to strengthen the feedback known as “slow-light,” thus extending the temporal laser bandwidth (speed) beyond the known limit of the relaxation oscillation frequency. The innovation is ground-breaking because the direct feedback from each cavity only needs to be moderate and can be controlled precisely via the coupled cavities, allowing for a higher degree of design freedom. Following this coupled cavity scheme, a resulting modulation bandwidth in the 100 GHz range is expected.

“Here we introduce a paradigm-shift in laser design. We utilize a novel coupled cavities approach to carefully control the feedback to the laser achieved by significantly slowing the laser light down. This coupled cavity approach adds a new degree of freedom for laser design, with opportunities in both fundamental science and technology,” said Volker Sorger, associate professor of electrical and computer engineering at the George Washington University.

“This invention is timely since demand for data services is growing rapidly and moving towards next generation communication networks such as 6G, but also in automotive as proximity sensor or smart phone’s face ID. Furthermore, the coupled cavity system paves a way for emerging applications in quantum information processors such as coherent Ising machines.”

The article Breaking The Power And Speed Limit Of Lasers appeared first on Eurasia Review.