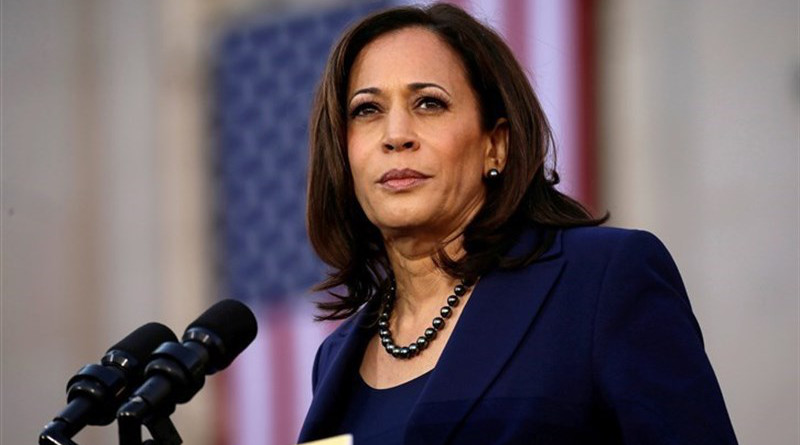 The night the news came of the victory of the Biden-Harris ticket in the US Presidential elections, the Vice President-elect, Kamala Harris — standing in front of a crowd of cheering, applauding, roaring and sometimes weeping supporters – spoke in terms worthy of a great historic occasion.

At a podium placed before an array of parked cars in which the audience had driven in to preserve social distancing norms, Harris, dressed symbolically in the white suit that evokes the women’s suffragette movement (and that is becoming her trademark), declared emotionally that she was “thinking about her [mother] and about the generations of women, Black women, Asian, White, Latina, Native American women, who throughout our nation’s history, have paved the way for this moment tonight”.

The moment was fraught with meaning, and for the hundreds of happy, flag-waving supporters that night, it signalled a breakthrough many had scarcely believed possible. America’s first woman vice president-elect represents multiple minorities: she is the first person elected to nationwide office who can claim Black, South Asian and Caribbean descent (and a Jewish husband to boot). For the thousands of little black girls who made “My VP Looks Like Me” T-shirts go viral over the next few days, Kamala Harris represented an expansion of their horizons.

But there was one slightly false note to all the fulsome tributes that flowed that night. Celebrating the ascent of a woman – the first, she proudly said, but not the last – the new US vice president-elect paid tribute to her late mother, Shyamala Gopalan, who in 1959 “came here from India at the age of 19” and “believed so deeply in an America where a moment like this is possible”. But, said Harris, “maybe [her mother] didn’t quite imagine this moment”.

Why not? An admiring Indian could well ask. Such a moment may not have been easy to imagine in the US, where there has been only one female Presidential candidate from a major political party and two vice-presidential ones ever – and all unsuccessful. But in South Asia, the glass ceiling was shattered long ago. Just a year after the teenage Shyamala Gopalan arrived in the US, Sirimavo Bandaranaike became the Prime Minister of Sri Lanka in 1960 upon the tragic assassination of her husband and then premier, Solomon.

Thus began a long list of Asian female heads of government. In India, Indira Gandhi became the nation’s first female Prime Minister when she was sworn into office in January 1966 (and then led the government again from 1980 till her tragic assassination in 1984). Bandaranaike repeated her stint as Prime Minister of Sri Lanka between 1970–77, and then again from 1994–2000, the last coinciding with her own daughter Chandrika Kumaratunga being the President of the country.

Across the border, Benazir Bhutto served as Pakistan’s first woman Prime Minister (and the first of a Muslim state), elected first in 1988 and then again in 1993. In Bangladesh, Khaleda Zia served as the first female PM from 1991 and would soon alternate in the position with Sheikh Hasina Wazed (first elected in 1996, re-elected in 2008, and continues to hold the office). The first female head of our republic came more than a decade ago in the form of Pratibha Patil, who served as our President from 2007-12.

So while no one can deny Kamala Harris the unique distinction she has acquired of being the first female Vice President of the world’s oldest democracy and, more to the interest of Indians, the first of part-South Asian descent, the concept of elected women holding the highest offices of the land is hardly novel to the South Asian region from which her mother hailed.

Indeed, one can argue that the USA has been notably slow in electing women to the highest offices by comparison with other democracies, even illiberal ones. It has been half a century, after all, since Golda Meir became the fourth Prime Minister of Israel in 1969 (and served till 1974). And around the world many women have emulated her. Margaret Thatcher ruled the United Kingdom with an iron hand as Prime Minister from 1979 to 1992. Vigdís Finnbogadóttir served as the first democratically-elected female President of Iceland from 1980 to 1996; Angela Merkel has been as close to indispensable a head of government as imaginable in today’s world, as Chancellor of Germany since 2005.

The list is long. More recent women Presidents include Dilma Rousseff of Brazil, Park Geun-hye of South Korea, Simonetta Sommaruga of Switzerland, Ameenah Gurib-Fakim of Mauritius and Kolinda Grabar-Kitarović of Croatia (who was also that country’s youngest-ever head of state). Similar stories abound elsewhere (Corazon Aquino in the Philippines, Megawati Sukarnoputri in Indonesia, Yingluck Shinawatra in Thailand, and Roza Otunbayeva in Kyrgyzstan, to name a few). Women heads of state or government currently serve in Bangladesh, Estonia, Ethiopia, Greece and de facto Myanmar.

True, Janet Jagan’s story does suggest that some – though not all – women political leaders benefited from connections to, or descent from, powerful men. Dynastic politics has often been touted as a key enabler of their rise; the impressive record of female leadership in the Asian political space, it can be argued, is not necessarily a reflection of a more evolved electorate or greater female political participation, but a perpetuation of family-based networks.

Still, the point holds: being Bill Clinton’s wife did not make Hillary Clinton more acceptable to the majority of American voters who had propelled her husband to the White House twice. Misogyny still held her back in the US, whereas it has not tripped up women in other countries.

While many women are relishing the prospect of the US getting used to Harris’ husband, Douglas Emhoff, in the unprecedented role of being the first “second gentleman”, the fact is that from Denis Thatcher to Asif Ali Zaradri, men around the world have played such a role and adjusted easily to its challenges.

So Kamala Harris’ is a uniquely American achievement. But it is also a reminder that the USA, a country known for pioneering advances in so many areas of human endeavour, needed till 2020 to breach the last barrier remaining – that of gender.