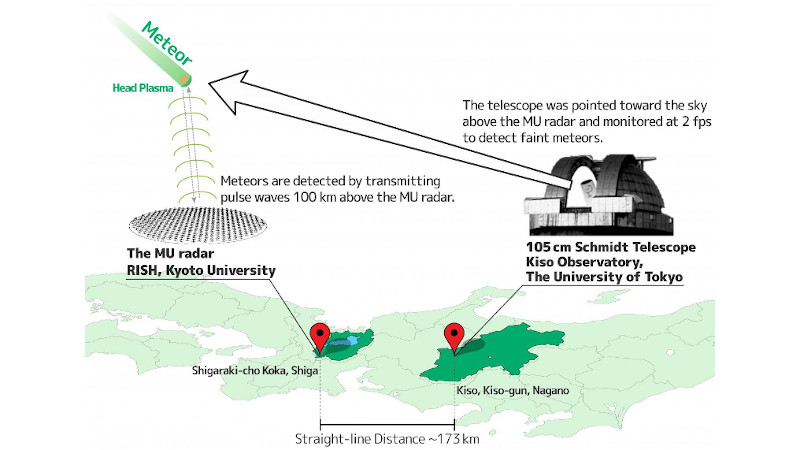 It is thought that over 1,000 kilograms of so-called interplanetary dust falls to Earth every day. This dust is essentially an untold number of small faint meteors, discarded remnants of asteroids and comets that pass by the Earth. Two ways to study faint meteors are radar and optical observations, each with advantages and limitations. Astronomers have combined specific observations with both methods, and can now use radar to make the kinds of observations that previously only optical telescopes could make.

Our solar system is a busy place — in addition to the large bodies we are all familiar with exist an uncountably large number of rocky asteroids and icy comets. These mostly stay put in their orbits far from Earth but many also roam around the solar system. As they do, they shed some material due to collisions, deformations or heating. Due to this, the Earth is surrounded by small particles we call interplanetary dust. By investigating the size and composition of the interplanetary dust, astronomers can indirectly investigate the activity and makeup of the parent bodies.

“When in space, interplanetary dust is practically invisible. However, around 1,000 kilograms falls to Earth every day in the form of tiny meteors which appear as bright streaks in the night sky,” said astronomer Ryou Ohsawa from the Institute of Astronomy at the University of Tokyo. “We can observe these with ground-based radar and optical instruments. Radar is useful as it can cover wide areas and gather vast readings, but optical telescopes can give more detailed information useful for our studies. So we set out to bridge this gap to boost our observational capacity.”

Ground-based radar is very good at detecting the motion of meteors, but it does not reveal much information about the mass or composition of the meteors. Optical telescopes and sensors can infer those details based on the light given off by falling meteors due to interaction with the atmosphere. However, telescopes have a limited field of view and until recently lacked the sensitivity to see faint meteors at all. Ohsawa and his team wished to imbue radar observatories with the powers of optical ones. After a few years, they have finally succeeded.

“We thought that if you could observe enough meteors simultaneously with both radar and optical facilities, details of the meteors in the optical data may correspond to previously unseen patterns in the radar data too,” said Ohsawa. “I am pleased to report this is in fact the case. We recorded hundreds of events over several years and have now gained the ability to read information about meteor mass from subtle signals in radar data.”

In 2009, 2010 and 2018, the team used the Middle and Upper Atmosphere (MU) Radar facility, operated by Kyoto University and located in Shigaraki, Shiga Prefecture, and the Kiso Observatory, operated by the University of Tokyo, on the Nagano Prefecture side of Mount Ontake. They are 173 kilometers apart, which is important: the closer the facilities, the more accurately the data from them can be correlated. MU points directly upwards, but Kiso can be angled, so it was pointed 100 km above the site of MU. The team saw 228 meteors with both facilities and this was plenty to derive a statistically reliable relationship to connect radar and optical observations.

“Data analysis was laborious,” said Ohsawa. “A sensitive instrument called the Tomo-e Gozen wide-field camera mounted to the Kiso telescope captured over a million images a night. This is too much for us to analyze manually so we developed software to automatically recognize faint meteors. From what we’ve learned here we hope to extend this project and begin using radar to investigate the composition of meteors. This could help astronomers explore comets and aspects of solar system evolution like never before.”