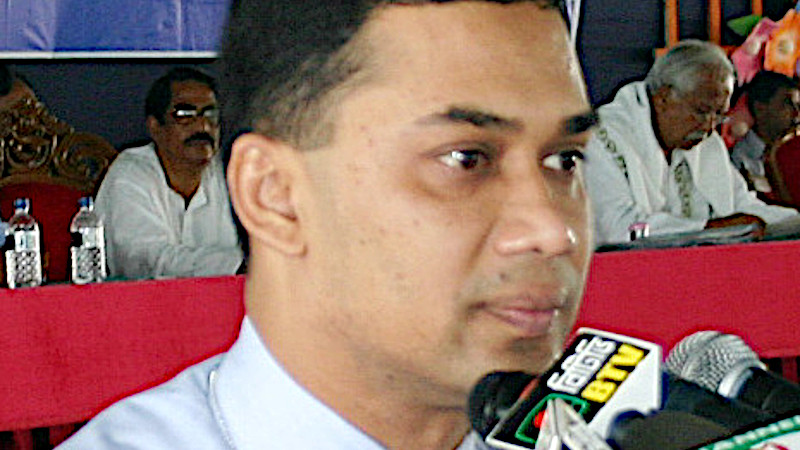 BNP Chairman Tarique Rahman is no longer that young that he once used to be in those days in the past. He is now about fifty-three, quite a seniority level in age. One can only advance in knowledge and wisdom with years, which is what he must have developed into. As the greatest Anglo-Irish poet W B Yeats said, around the same age, in his short lyric “Men Improve with the Years,”

Or the discerning ears,

Delighted to be but wise […]

When I had my burning youth;

But I grow old among dreams,

(*A mythological god, Triton is usually represented as a merman/mermaid, with the upper body of a human and the tailed lower body of a fish).

Chairman Tarique is currently leading the largest and most popular party of Bangladesh, the BNP. He has been in the leadership role for the last few years from a state of forced exile in the UK. Enjoying the support of millions, many many times higher than the despotic and dictatorial terror party, Bangladesh Awami League (BAL), Tarique has every right to feel free to speak the way he is comfortable, competent and confident with, using the God-gifted natural body language and normal tone of voice. It is nobody’s business to interfere with his expressive and suggestive gestures and physical movements, which are already as strong and assertive as they need to be. In his expressions and speeches, he needs to be communicative, transactional and leaderlike to convey his message to the people (of course, with respect to all the people from all walks of life as they also have to respect and admire him greatly considering his position too, which, for sure, they all do).

In the lead, Chairman Tarique got to get his message out and across, effectively and forcefully, especially to counter the Awami fascism and their state terrorism. That is what he intends to achieve by means of his normal words and natural body language. Why would some critics unnecessarily misread or misunderstand them? There is no room for Tarique to engage in the battle of modesty, as some people seem to be wrongly suggesting he should. As the leader of the truly major party, Chairman Tarique has got to be his own person, which he is, independently exuding an aura of his leadership qualities to inspire millions of his supporters. Only a handful of helpless, passive-looking Standing Committee members alone cannot and should not be his audience. The entire nation of Bangladesh is his audience who looks up to him for strength, guidance, inspiration, and motivation.

Moreover, all leaders cannot be expected to be a copycat replica of others. Starting from boy kings to very young politicians throughout history, individual leaders have their own style of conducting themselves. One’s national and cultural background also has a role to play in the shaping and molding of one’s style of speech and gestures. Why to officiously meddle with one’s style of speech and gestures? Why to find fault with one’s normal, yet leaderlike freedom of expression. That is a shame for those who do. It is their gross and grave blunder to ridicule Chairman Tarique, even in the slightest, except in a positive and constructive manner.

Son of the two most popular, legendary, majestic, and phenomenal political leaders of Bangladesh, President Ziaur Rahman and Prime Minister Begum Khaleda Zia, Tarique Rahman is now the Acting, in fact, de facto Chairman of the largest and most popular party of Bangladesh, the BNP. Forced to live in exile due to the ferociously fascist Hasina regime, he has grown to be a mature, dynamic, and charismatic leader at the top of his party. An orphan who lost his father to the assassins’ bullets when he was hardly fourteen, forced to be away from his old and ailing mother, and beaten mercilessly almost to death by the Moeenuddin-Masududdin gang, Tarique is already intensely and immensely suffering. In the face of the ruthless Hasina Awami dictatorship, he and the party he leads, that is, the BNP, need the unmixed and unequivocal support of the whole nation of Bangladesh. Starting with the Sheikh Mujib family, if all the Awami men and women can establish their throngs and thousands of thuggish dynasties, immersed in crimes and corruption, what’s wrong with the most luminous, bright, and brilliant Zia family with its most durable and long-lasting contributions in the state building measures of Bangladesh? Nothing. Absolutely nothing. There can be none.

Both my Bangladesh: Political and Literary Reflections on a Divided Country (Peter Lang, 2018) and Bangladesh Divided: Political and Literary Reflections on a Corrupt Police and Prison State (Peter Lang, 2019) have been dedicated to Chairman Tarique Rahman and his historic and epoch-making parents in the context of Bangladesh politics. The enormity and extremity of the neo-and-near-and-more-than-partially fascist Hasina-led Awami regime have forced me to make what is only a small representation of its myriads of mala fide misdeeds in my two books, in addition to my dozens of other articles, including the long chapter “Sheikh Hasina’s Brutal BNP-Phobia and Her Scandalous ‘Midnight’ Power Grab Through Vampire Vote Dacoity and Villainous ‘S/Election’ Rigging With an All-Time High Record of Humongous White-Collar Corruption” that has appeared in Sabria Chowdhury Balland (ed), Bangladesh: A Suffering People Under State Terrorism (Peter Lang, 2020). The same purpose has been intended to be achieved in the forthcoming Begum Khaleda Zia: Portrait of a People’s Leader of Bangladesh (due to be out later this month).

Following the “let loose” Hasina and Hasina police excesses and atrocities in dumb horror and hooliganism, all the above books have followed an untraditional format in the presentation of only a miniature amount of those never-ending cruel and mischievous ill deeds. One can only long for a Tennyson’s Eagle-type and the Greek myth’s Icarus-type swift and sudden fall of this irrational, irritating, dictatorial, and draconian regime. The first single-authored two volumes of almost identical titles, are also, therefore, dedicated, in an unconventional way, to the following “large sweet soul[s]” and “the sweetest, wisest soul[s] of all [our] days and lands,” phrases that the American poet Walt Whitman uses to describe President Abraham Lincoln in his elegy “When Lilacs Last in the Dooryard Bloom’d” (in Stanzas 10 and 16 respectively). The distinguished dedicatees, among others, are:

• The famed and fabulous (and short-lived) former President Ziaur Rahman, declarer and proclaimer of the independence of Bangladesh in 1971, who, as হাজার বছরের শ্রেষ্ঠ বাংলাদেশী (the greatest Bangladeshi ever, of a thousand years!), remains one of the brightest luminaries in the political sky of the country to provide direction and inspiration to the nation in all its circumstances—good or bad, rain or shine, dog days or heydays;

• The great and glorious former Prime Minister দেশনেত্রী Begum Khaleda Zia, a leader of long suffering and sacrifice and lasting and enduring achievements and accomplishments, who has most unjustly and vindictively been sentenced to confinement by the regime’s all crooked and kangaroo means—all fantastically subversive, surreptitious, and subterranean in its sublunary state of affairs; and,

• The entire Zia family—most patriotic, heroic, and illustrious—, including the suffering and sacrificing, exiled/নির্বাসিত, yet undaunted and indomitable Tarique Rahman, who potentially represents the most phenomenal future of Bangladesh.

The following are the dedicatory lines at the beginning of those first two titles—Bangladesh and Bangladesh Divided. These lines form the second part of my poem, “Beauty of Bangladesh: The Reverse,” published in full in the second of the two volumes.

The greatest beauty of that land lies, however,

Not in the too idealistic souls’

And their third option advocacy,

But in the new and reformed and trusted views

Of many a leader out of power

United under one common banner,

(Reform being better than radical leveler),

And their enlightened strategy,

Tolerance and repentance as necessary,

On which has missed out, miserably,

The regressive and retrograde Awam party

Ruling by force and farce terribly.

Drenched in police and partisan divide,

Drunk in the hard liquor of remand and repression,

All of the nature of Awami-BAKSALi

The regime has paved the way for

And the spirit of its nationalist community,

As opposed to the criminality of theirs.

The nation can’t wait for you, Tarique,

Born of a heroic stock

Bereft of parental love and care (see Note#1 below)

But then from a certain height

A beacon to the befitting subject

The young man of broken bones

In their dark prison,

And London Bridge that never fell down.

Forced to be away—

As were many in history there

From the wrong-headed, listless terrors, at home—

Her ladyship’s land’s ready for you,

(Our Prince Hal and Henry V of England,

And the misleading figures of Falstaff discarded),

And your leadership to overwhelm

And to be at the helm.

The radiant and condign Sharmilah,

And, certainly yours as well,

The remarkably lissome and resplendent Zubaidah,

Scoring high in your popular and patriotic

To conclude, one must never make light of anybody being beaten to the breaking of his backbone. That is extremely inhuman, pathetic, and painful, more than a jail term. Those who broke the young Tarique Rahman’s bones must be brought to justice just as those who caused the forced ouster of his mother and former PM Khaleda Zia from her old home, denying her rights and without giving her a chance for a dignified exit she deserved must be reinvestigated as well, fully and properly. Similarly, those gopals/gopalis, speaking in a foreign or deliberately twisted accent to hide their true identity, who blocked Khaleda’s way out from her sand-and-cement-truck sieged Gulshan office and most disrespectfully taunted at her must be identified and brought to account. (http://datab.us/NQOWA6jq3Z0#Khaleda%20Zia%20Vs%20Gopali%20Girl%20%2829%20December%202013%29;  http://datab.us/LEe3PYl-hbs#Gopali%20by%20Khaleda%20Zia). On top of all this, those who most vindictively meted out jail sentence to Begum Zia must be brought to book.

Finally, Chairman Tarique would probably do even better if he attempts to adjust and overcome what by common perception may look or sound a bit rude without compromising his leadership qualities of strength, assertion and firmness. What is sure to be the best is for him to allow himself to be more accessible to and surrounded by educated, experienced and enlightened well-wishers of intellectual bent of mind. That will only enhance and enrich his social and political standing, that he badly needs to climb up further in the public estimation of his worth, dignity, popularity, and nobility. Besides Islam’s Prophet, Chairman Tarique’s role models should only be his own great parents. He should emulate them and venerate them with all pride and seriousness leaving no shortage even in competing and superseding them, if possible!

*About the author: Q M Jalal Khan: Author of Bangladesh: Political and Literary Reflections on a Divided Country (Peter Lang, 2018) and Bangladesh Divided: Political and Literary Reflections on a Corrupt Police and Prison State (Peter Lang, 2019), in addition to numerous other publications on literature and culture. After disengaging from many years of full-time teaching abroad, American-educated Dr Khan is currently on the adjunct faculty at an institution of higher learning in North America. His recent work, “Sheikh Hasina’s Brutal BNP-Phobia and Her Scandalous “Midnight” Power Grab Through Vampire Vote Dacoity and Villainous “S/Election” Rigging With an All-Time High Record of Humongous White-Collar Corruption” has appeared in Sabria Chowdhury Balland (ed), Bangladesh: A Suffering People Under State Terrorism (Peter Lang, 2020).

The article Chairman Tarique Rahman: A Man Carved In His Own Symmetry – OpEd appeared first on Eurasia Review.