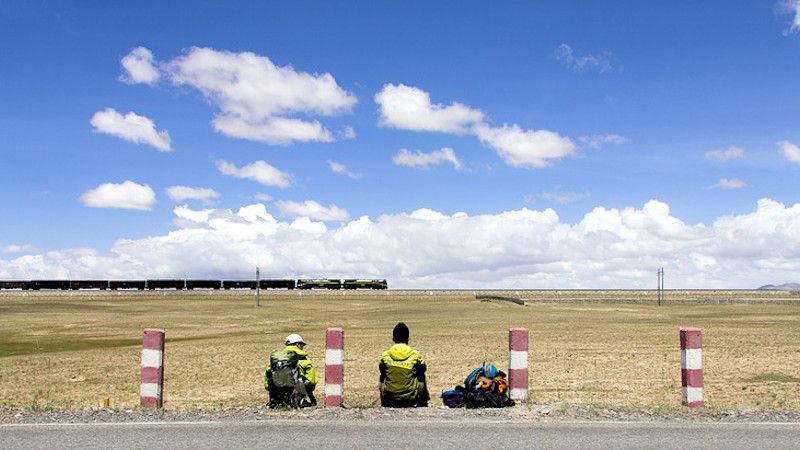 Chinese President XI is calling for expediting the construction of the new railway line connecting Lhasa with Chengdu to strengthen border defense.

China announced its intention to connect Tibet with another new railway line — the Sichuan-Tibet railway line to protect China’s borders.  On the eve of starting the construction of this new route, Chinese president said (Xinhua Nov 9) that the new route will be key to safeguarding China’s national unity and consolidating border stability and called for building the railway line expeditiously by “concentrating resources “ for its completion.

Recently China Railway announced the bidding results for the construction of two tunnels and one bridge, as well as the power supply project for the Ya’an—Linzhi ( Ya’an-Nyingchi) section of the Sichuan-Tibet Railway. This will be the second railway line connecting Tibet with China and will shorten the travel time to Lhasa from 48 hours to just 13 hours. The  Sichuan-Tibet railway line starts from Cheng du, the capital of Sichuan province and the  new addition  Ya’an-Nyinngchi section will be 1,011 kms long, and includes 26 stations when completed — taking Chinese railway right up to the disputed boundary with India. The cost of the project is estimated at 319.8 billion yuan.

It would be interesting to recall that China started the railway survey of linking Lhasa with China in late 80s and the survey team had submitted three links for railway connectivity with Tibet:

The expert committee had recommended the first and second options for connecting Lhasa with China as against the Qing-Zang railway third option, as these two options were shorter, cheaper and easier to build.

Nevertheless, the then-CMC did not approve it on security considerations arguing that these railway lines run close to the Indian Border and would pose a security challenge. As such, it hence preferred the circuitous, the longest, and costliest, as well as the hazardous route, that passes through the high altitude point of 5,072 meters, for safety and security concerns to connect Lhasa with Germu along the Qing-Zang line

Chengdu, has always served as a vital gateway city to Tibet in southwest China. Currently, the supplies from Chengdu to Lhasa come via the Chengdu-Lhasa train (Z322), covering 3,070km across 5 provinces, with a total duration of 36:18hrs. Now this distance can be covered by this short direct route train in only 13 hrs. The new line will pass through Linzhi located close to Indian border in Arunachal Pradesh .

The Qing-Lhasa line at1,956 kms long (Xi Ning-Germu 815 kms, Germu-Lhasa 1,142kms) opened in 2006  and has now been extended to Shigaze (280 kms) to link later with Yadong, and Kathmandu and finally to Lumbini close to the India-Nepal border. The project planned in 2008 is now expected to be completed in 2025, but construction costs (US$ 300 million) remain a worry as the line faces hurdles because of the terrain.

The proposed Kerung-Kathmandu linkup is part of BRI project entering Nepal in Rasuwan district and will eventually link it with India. The feasibility report for this additional link was prepared in late 2018 and technically a tough project as 98% of the line in Nepal passes through tunnels and bridges with about five stations. Tracks are to be built on steep terrain and the line climbs from an altitude of 1,400M in Kathmandu to 4,000M in Tibet, costing 28 billion yuan. Although only one third of the total length falls on the Nepal side, it had to account for half the costs due to  difficult terrain conditions in Nepal. It was supposed to reach Kerung (Tibet) by 2020, but has supposedly been delayed and pushed to 2025.

The Nepal-China cross border railway was listed as part of trans-Himalayan connectivity network at the BRI forum Beijing (April 2019). The cost and profitability of the project is a cause of concern as Nepal has a trade deficit with China of $12.8 (2019) equal to nearly half of Nepal’s GDP. Nepal’s exports to China fell by 30% (2019) and the train will have to run practically empty from Nepal unless India also joins this network.

The new railway route linking Lhasa with Cheng du is strategically of utmost importance facilitating speedy mobility of forces from Cheng du to Tibet and other border regions near Indian border. President Xi’s intervention to expedite construction reflects the importance that China attaches to this project. However, what is worth noting is that China had earlier warned India and expressed concern on building the Twang railway link (1-4-2017) linking Twang with the Indian railway network.

*Prof Ashok Tiku, is a Senior China Analyst with 45 years of experience.