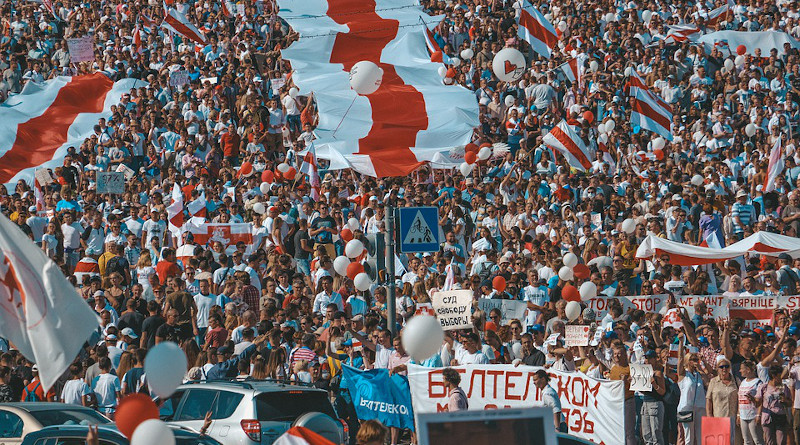 A new expert report has found “massive and systemic” human rights violations in Belarus before and in the aftermath of the August 9, 2020 presidential election, Human Rights Watch said. The report documents election fraud, violations of freedoms of expression and assembly, excessive police violence and systematic torture, widespread arrests of peaceful protesters, and numerous politically motivated prosecutions.

The 58-page report, prepared by an independent expert under the auspices of the Organization for Security and Co-operation in Europe (OSCE), says that the Belarusian government should cancel the results of the August 9 vote, in which authorities declared Alexander Lukashenka the victor. The report says that Belarus should hold new elections in line with international standards, immediately free all prisoners held for political reasons, and hold those responsible for torture and other abuses accountable. The report also calls for the establishment of an independent, international investigation into all allegations of torture and ill-treatment.

“This is an extremely important and timely report that captures a wide range of repression and cruelty that Belarusian authorities have unleashed on peaceful democracy protesters and their supporters,” said Rachel Denber, deputy Europe and Central Asia director at Human Rights Watch. “Governments should use this as a blueprint for action, to ensure that that no stone is left unturned in the pursuit of accountability for the human rights crimes that continue in Belarus.”

Belarusian security forces responded to an unprecedented wave of peaceful protests that swept the country following the August 9 election by arbitrarily detaining thousands and systematically subjecting hundreds to torture and other ill-treatment. However, rather than stifle the protests, the abuse served to increase public outrage. Protests are now in their fourth month. Tens of thousands of people continue to demonstrate peacefully for fair elections and justice for abuses.

The report is the result of an investigation invoked on September 17 by 17 OSCE participating states, under the organization’s so-called Moscow Mechanism, a procedure by which participating states can appoint an expert to report on an urgent and serious human rights situation.

The independent expert, Professor Wolfgang Benedek, analyzed 700 submissions received online, surveyed extensive reports and testimony provided by more than 20 Belarusian and international human rights organizations, including Human Rights Watch, and interviewed numerous victims and witnesses. The Belarusian government refused to grant Benedek’s request to visit Belarus and did not reply to his requests for information.

The report confirmed the systematic nature of torture of detained protesters by Belarusian riot police in the aftermath of the elections, noting that the “brutal violence seems to have had the purpose of punishment and humiliation, but in particular of intimidation of potential other protesters.”

The report also found that police use of water cannons, rubber bullets, and stun grenades against protesters was “disproportionate,” and constituted excessive violence.

In the report, Benedek states it was “worrying” that not a single individual from the security forces has been held accountable for torture or excessive use of force, and notes that several people who submitted torture complaints faced reprisals in the form of threats of groundless criminal charges.

Benedek states that media freedoms, journalists’ safety, and other rights are “under massive attack.” He documents that in the post-election period, at least 178 journalists “experienced repression and violations.” Dozens have been injured since January due to police violence.

Women have been at the forefront of the ongoing protests. The report describes threats of sexual violence women faced in police custody, and says that women were “forced to undress in the presence of men, cameras observing their cells and toilets were operated by men, and there was a general lack of women guards.”

Benedek describes other aspects of intimidation, persecution, and harassment against broad groups of civic actors, ranging from civil society organizations and women and labor activists to religious leaders, athletes, and artists.

“This important OSCE expert report is not just a grim compendium of abuse,” Denber said. “It is an authoritative call to action, to stop these abuses, provide justice to victims, and make sure they don’t happen again.”