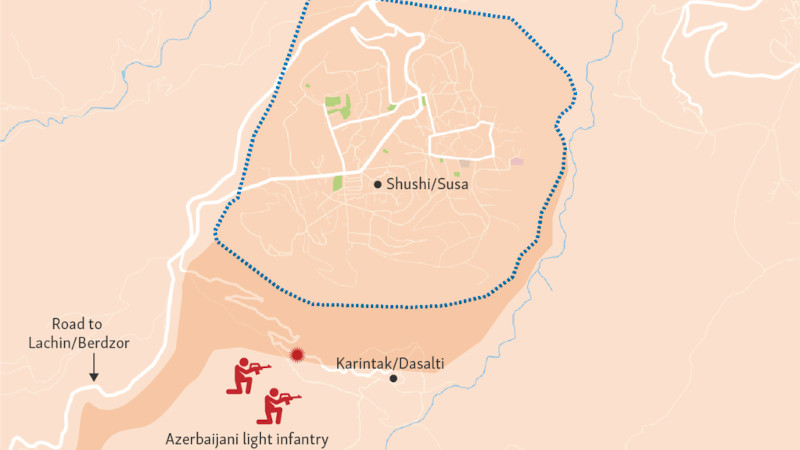 (RFE/RL) — A century-old Armenian expression says, “Whoever controls the city of Shushi controls the whole of Nagorno-Karabakh.”

That proved to be true in May 1992 when ethnic Armenian fighters drove out Azerbaijan’s army and seized the mountain fortress city, known in Azeri as Susa.

After a monthlong Azerbaijani military advance across Nagorno-Karabakh’s southern flank, Shushi/Susa is once again the focus of a crucial battle in the war over the breakaway Azerbaijani region.

Azerbaijani President Ilham Aliyev has also said his troops have advanced to positions below the towering cliffs that form a natural defense on the city’s southern and eastern sides.

On November 4, Aliyev claimed on Twitter that Armenian forces “have already admitted defeat.”

“We have modern weaponry and a high fighting spirit,” Aliyev said. “We showed who’s who and proved that Armenia’s ‘invincible army’ was a myth.”

Ethnic Armenian forces said on November 4 that they had repelled an overnight Azerbaijani assault on a village road that leads from below the cliffs of Shushi/Susa to the high ground just a few kilometers west of the city.

Reports late on November 4 said Azerbaijani light infantry was continuing to fight for that road near the village of Karintak/Dasalti at the bottom of the cliffs.

If Azerbaijani forces manage to secure that road and advance to the high ground above, they will cut off Nagorno-Karabakh’s southern supply route from Armenia that has been christened by Armenians as the Road Of Life.

Also known as the Lachin Corridor, the route passes from the southern Armenian city of Goris through the occupied Azerbaijani town of Lachin/Berdzor to Shushi/Susa’s fortified southwestern entrance.

The only other road in and out of Shushi/Susa leads north to Stepanakert/Xankandi.

For ethnic Armenian fighters, the loss of their southern supply corridor would leave them with just one overland link to Armenia — a northern route passing through the Mrav/Murovdag mountains to Stepanakert.

As fighting continued on November 4 below Sushi/Susa, ethnic Armenian forces on the high ground closed their Road Of Life to civilian traffic.

They also announced they were carrying out “search operations” further west along the Lachin/Berdzor road at “probable penetration routes of Azerbaijani sabotage groups.”

Yerevan’s government-run Armenian United InfoCenter also released aerial reconnaissance footage showing what it said was an attack on November 4 against Azerbaijani scouts on the Lachin/Berdzor road about 4 kilometers southwest of Shushi/Susa.

Meanwhile, Azerbaijani troops were shelling Shushi/Susa and Armenian defensive positions around the city with mortars.

To be sure, the war over Azerbaijan’s breakaway region of Nagorno-Karabakh has not gone well for ethnic Armenian forces since the decades-old frozen conflict reignited on September 27.

Several thousand soldiers and hundreds of civilians on both sides are thought to have been killed since then, though military analysts say an accurate assessment is not currently possible.

From the 1994 cease-fire line southeast of Fuzuli/Varanda, Baku’s troops have advanced westward to reclaim more than one-quarter of the occupied Azerbaijani territory in and around Nagorno-Karabakh.

Bolstered by fleets of drone aircraft, they’ve swept across Shushi/Susa’s southern flank — following the southern frontier with Iran all the way to Azerbaijan’s western border with Armenia.

In the process, they’ve restored Azerbaijan’s sovereignty over swaths of territory in the districts of Fuzuli, Cabrayil, Zangelan, and parts of Qubadli.

Once the administrative capital of Nagorno-Karabakh, Shushi/Susa is considered by Armenians and Azerbaijanis alike as an “unassailable” city — even though it has fallen in previous battles.

Azerbaijanis familiar with the terrain still debate how Baku’s forces lost the mountain stronghold to the Armenians on May 9, 1992.

For Baku, it was a humiliating defeat in a war where more than 24,000 Azerbaijanis and 6,000 Armenians were killed – with nearly 1 million Azerbaijanis displaced from their homes in Armenia and Azerbaijan and nearly half a million Armenians displaced across Azerbaijan.

Azerbaijani veterans of the battle for Shushi/Susa say their commanders ordered them to withdraw on the evening of May 8, 1992 — assuring them they would regroup with reinforcements and retake the city later.

Mustafa Hajibeyli was among the last Azerbaijani soldiers to leave the city before Armenian forces entered on the morning of May 9.

“Before occupying Susa, the Armenian forces were already in control of several nearby villages, including Dasalti (Karintak),” Hajibeyli told RFE/RL.

Hajibeyli said heavily “fortified” Armenian fighters “nearly surrounded” the city a few days before their assault when they cut off the road leading to Lachin/Berdzor.

Even then, Hajibeyli said it was difficult for the Armenians to attack the mountaintop in 1992. He said the Azerbaijani defenders “didn’t even think about losing and leaving” until they received the withdrawal order.

“There were only about 700 Azerbaijani soldiers in Susa,” Hajibeyli said. “It was not enough to defend the city” against a siege once the Armenians cut off the road to Lachin/Berdzor.

Ethnic Armenian veterans of the 1992 battle say their assault was a matter of “survival” because Azerbaijani artillery at Shushi/Susa was devastating their positions to the north in Stepanakert/Xankandi.

Arkadi Karapetian, commander of 260 fighters involved in the May 8 assault, explained his point of view in a joint Armenian-Azerbaijani documentary film project called Parts Of A Circle.

Karapetian said the assault halted before sundown because they’d run out of ammunition. Nevertheless, he said, the Azerbaijani soldiers withdrew that night under cover of darkness.

“At night, column by column, the Azerbaijanis marched away,” Karapetian told the makers of the documentary, which was produced by the Media Initiatives Center in Armenia and Internews Azerbaijan, with coordination from London-based Conciliation Resources.

Hajibeyli told RFE/RL that Azerbaijani military planners learned lessons from the 1992 battle and will now find it “much easier” to retake the city.

“First of all, Azerbaijan’s army now controls the skies with its drones and planes,” Hajibeyli said. “Secondly, it deploys tactics which force the enemy to surrender the cities without major clashes.”

“They did that in Fuzuli (Varanda) and Caybrayil (Jrakan), taking control of the surrounding mountains and trying to cut all the roads to the cities — forcing the enemy to leave their heavy fortifications and flee.”

Arif Pasha, who also fought for Azerbaijan in 1992, told RFE/RL that Baku’s defense of Shushi/Susa “was not possible” once the Armenians cut off the road to Lachin/Berdzor.