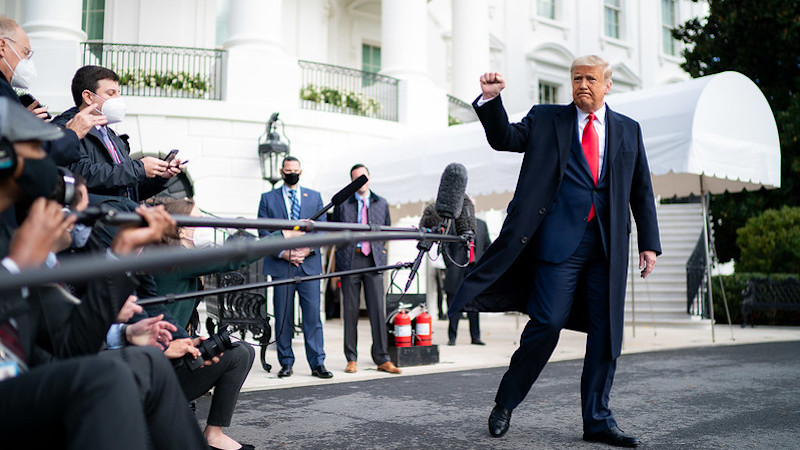 For four years, President Donald Trump has endured a heavy bombardment of press paroxysms, Hollywood handwringing, Democratic delirium, and feminist freak-outs. If this were the pre-2016 election world and perhaps any other president, the incumbent would be ousted from the White House faster than you could say Make America Great Again. And yet, despite the staggering onslaught of vitriol and insanity directed at his administration, Trump received more votes on Election Day 2020 than in 2016 – and more than the left’s perpetual victim, Hillary Clinton.

A Look At The Numbers

The United States has witnessed the greatest voter turnout in modern history. But while not all the ballots have been counted, one figure pertaining to President Trump is noteworthy: His vote count.

In 2016, Trump received close to 63 million votes nationwide, garnering 46.1% of the popular vote. One presidential election cycle later, and the real estate billionaire mogul is on track to receive roughly 68 million votes – and counting. In contrast to Clinton, Trump secured three million more ballots than the former Secretary of State. This is an impressive feat for somebody who has been deemed by leftist militants as Literally Hitler™. Or, in the case of Dr. Bandy X. Lee, a professor at the Yale School of Medicine and frequent guest on CNN and MSNBC, even worse.

Media Blue In The Face

In the aftermath of the 2016 election, the gatekeepers of allowable opinion promised to perform an autopsy on their political coverage. A few years later, the media abandoned that and went on the attack against MAGA Country, desperate to exact revenge for the embarrassment that occurred a few years ago. The playbook contained the same tired full-court press – calling Trump supporters racists, sexists, homophobes, Islamophobes, and authoritarian enablers. Even Biden claimed that he would not fan the flames of division, but then asserted that 10% to 15% of the population are not good people.

On Election Night, the talking heads on the cable news networks professed that the country failed to repudiate President Trump and his supposed white supremacy. Should Trump lose the White House, his electoral defeat would not be severe enough. The Fourth Estate demanded an annihilation in 2020, a historic and monumental loss that would never be emulated again – that is, until some other Republican bogeyman gets labeled the next [insert dictator from history here].

Anchors and Journalists evidently forgot the wisdom of Confucius: “Before you embark on a journey of revenge, dig two graves.” As the fake news industrial complex traveled on this path of vengeance, the media continued to shred every last ounce of credibility, respectability, and trust. Who could ever again believe a word emanating from the mouths of the people pretending to be experts on television?

Americans Are Not Gullible Creatures

The left anticipated a Biden landslide heading into November 3, using every foul tactic within the guiding principles of the post-2016 journalism handbook. The left’s disdain for the American people who choose to embrace diversity of thought over conformity will be intensified in the weeks and months to come, no matter the 2020 election results. Considering that Trump secured more votes this year than Hillary Clinton in 2016 and built upon his support from that time capsule, more members of the voting public successfully avoided contracting Trump Derangement Syndrome.

*About the author: Economics Correspondent at LibertyNation.com. Andrew has written extensively on economics, business, and political subjects for the last decade. He also writes about economics at Economic Collapse News and commodities at EarnForex.com. He is the author of “The War on Cash.” You can learn more at AndrewMoran.net

The article Millions More Americans Like Trump In 2020 Than In 2016 – OpEd appeared first on Eurasia Review.