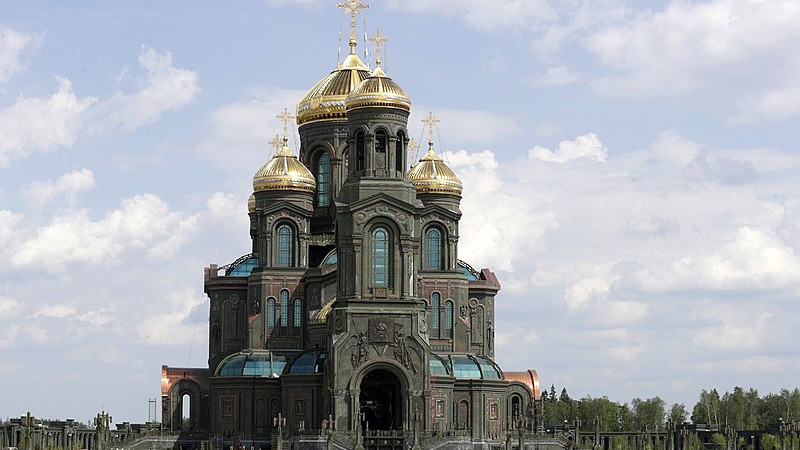 Russia’s attempts to hide behind the pretext of religion or to engage religion in its propaganda machine have reached their highest point. The fact that Article 14 of the Constitution of Russia stipulates that religion is separated from the state1 means nothing, because Russia’s predecessor, the USSR, also had one of the most progressive constitutions but it existed only on paper.

The practice of blessing weapons is quite controversial in itself, but if a priest defends the blessing of nuclear weapons by calling them “the salvation of the Russian nation, culture and church”2, everything suddenly becomes extremely bizarre.

However, the apex of amorality is the Russian Armed Forces’ Main Cathedral consecrated on 14 June and opened on 22 June 2020. Don’t get me wrong, it’s not that I’m against cathedrals or religion in general, but this is a weird example of both. Should a cathedral, where people come to talk about love and kindness towards each other, feature depictions of war and weapons? Should the images of saints in stained glass mosaics be replaced with armaments and soldiers? I’m sure many of you will agree that it’s disrespectful to call a place that worships war and weapons a cathedral. Moreover, the cathedral is used to propagate state policies which happen to be very questionable to anyone concerned with actual history.

If you visit the cathedral’s website,3 you can see that its main goal is to glorify the victory of the USSR in World War II. They don’t even attempt to hide it. The description of the cathedral states that it’s total height, including the cross, is 96 meters, and this is because in the year 960 Grand Duke Vladimir was born. The diameter of the main dome is 19.45 meters, and as we know WWII ended in 1945. The height of the belfry is 75 meters, – 2020 marked the 75th anniversary of WWII. And the height of the small dome is 14,18 meters because WWII saw fighting for 1,418 days.4

This proves that the cathedral was built with the sole purpose of spreading WWII propaganda.

The tour guides also tell a quite disturbing story that the floors have been made of melted down Wehrmacht weapons and tanks, adding that walking across the floor symbolizes “delivering a blow to the fascist enemy.”5 Question – where were the tanks kept for all these years?

I will remind you that during Soviet times the authorities were fiercely against religion and priest. Of course, this didn’t concern those congregations that agreed to cooperate with security services.6 The truth is that the USSR ruthlessly eradicated religion and churches, leaving only those who acted in the interests of intelligence services. Cathedrals were usually turned into warehouses or similar objects.

Religious faith in Soviet times wasn’t compatible with communist beliefs, and no one even dared to think of going to war in the name of religion because thinking of something like that could get you killed. Therefore, the current attempts to merge the church with WWII are unnatural, to say the least.

However, opinions on this differ. “A cathedral of such greatness can only be built by a nation that loves God,” expressed Bishop of Klina Stefan, who leads the branch of the Russian Orthodox Church responsible for cooperation with the Armed Forces. Before becoming a priest, Stefan (59) served in missile defense forces in the Soviet and Russian armies. Stefan defends the use of Soviet symbols, arguing that the cathedral depicts “all eras of our nation, our Sacred Russia”, adding that it would be wrong to exclude WWII.7 There is no doubt that the Russian people love god, but what do the current leaders of Russia love? It’s evident that god is ranked lowest in the list of things they love. If we continue Stefan’s idea, then it would be only natural to depict Stalin and Zhukov as Satan. No one has yet been able to murder as many people as Stalin and Zhukov did. And the unimaginable losses suffered in the first days of war are also on their shoulders. We could say that this was on their conscience, but we would then be naïve – we know that they didn’t have any.

And if the cathedral depicts all eras of Russia, then where are the mosaics of the Winter War that lasted from 30 November 1939 to 13 March 1940? The war that begun because the Soviets invaded the significantly smaller Finland but somehow suffered severe losses. Finnish researchers state that there were up to 270,000 casualties and 300,000 injured and sick on the Soviet side. The builders apparently must have forgotten this shameful chapter of Soviet history.

There are disagreements regarding the cathedral in Russia as well. “Many priests who grew up in the seventies and the eighties and personally stood against the church-hating Soviet apparatus are shocked and find it unacceptable,” says theologian Sergey Chapnin from Moscow.8 I feel obliged to mention the book “Conspiracy of villains. Notes of the Former KGB Lieutenant Colonel” which reveals that in August 1969 the KGB was able to implant an agent named Kuznetsov in a leading post in the World Council of Churches. In 1982, 229 clergymen and sectarians were serving time in prison (220 in 1981), 18 persons were in exile (24 in 1981). The KGB had 2,500 dossiers on people in this category (2,225 in 1981) and the most significant conclusions were that “thanks to our leading agents, the Russian Orthodox Church, as well as Armenian and Georgian churches have taken strictly loyal positions [..] In 1982, 1,809 meetings were held and 704 reports received.”9

Knowing this, we can be certain that the priests who lived during the seventies and the eighties remember best what was the attitude of the regime towards the church – only those who supported repressions were able to do their work. If someone refused to cooperate, the regime would turn against them. I will add that their situation was great, when compared to that of their colleagues before and during WWII. But their opinion is unanimous and clear – the Main Cathedral of the Russian Armed Forces is a disgrace to the Russian Orthodox Church.

The article Putin’s Clique Doesn’t Mind Exploiting The Faithful For Their Own Ends – OpEd appeared first on Eurasia Review.