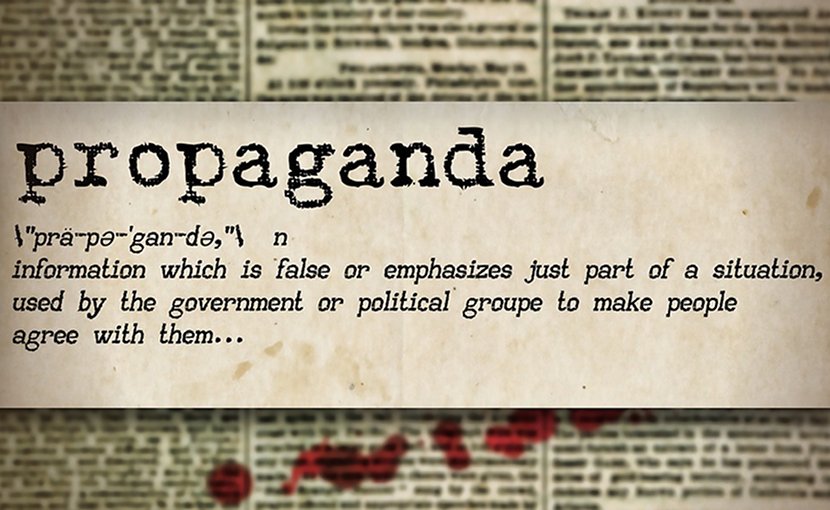 Instead of investigating the incriminating contents of Hunter Biden’s emails, obtained by the New York Post last week, the US national security establishment and the mainstream media are deploying a shrewd diversionary tactic of calling into question the source of emails by dubbing it “Russian disinformation campaign” in the run-up to the US presidential elections.

Natasha Bertrand reported for the Politico [1] yesterday that more than fifty former senior intelligence officials have signed on to a letter outlining their belief that the recent disclosure of emails allegedly belonging to Joe Biden’s son “has all the classic earmarks of a Russian disinformation operation.”

What “classic earmarks of a Russian disinformation operation” the former intelligence officials were referring to? Did the emails carry the signatures of Russian President Vladimir Putin? Propagating baseless rumors without a shred of evidence merely on the basis of speculations and hearsay calls into question the very eligibility of such “intelligence officials” to the meticulous job of intelligence gathering. No wonder they were superseded in the intelligence community.

Natasha Bertrand alleges: “While the letter’s signatories presented no new evidence, they said their national security experience had made them ‘deeply suspicious that the Russian government played a significant role in this case’ and cited several elements of the story that suggested the Kremlin’s hand at work.”

First of all, “no new evidence” implies that prior evidence of alleged Russian disinformation campaign is available, which the readers are utterly unaware of. Secondly, purported “national security experience” of paranoid spooks makes them suspicious about acquaintances and activities of their wives, too, does that imply they are being cuckolded by their wives merely on the basis of a hunch?

What could be more emphatic rebuttal of lamestream media’s conspiracist, Russophobic approach than Director of National Intelligence John Ratcliffe’s statement on Monday that Hunter Biden’s laptop “is not part of some Russian disinformation campaign,” amid claims from Adam Schiff and other Democrats glossing over the Biden family’s illicit financial dealings with foreign nationals and leveling baseless counter-allegations.

Without falling for the Machiavellian circumlocution, President Trump demanded on Tuesday that Attorney General William Barr needed to act and appoint somebody after nearly a dozen House Republicans urged him to tap a special counsel to investigate revelations coming from Hunter Biden’s laptop on the lines of Special Counsel Robert Mueller’s infamous “Russiagate” witch-hunt.

“And you didn’t have a job before your father was vice president,” Trump continued. “You can’t go and go with your father and every stop you make, you pick up $1 billion.” He added: “The vice president got a kickback, and everybody knows it, and they’ve known it a long time.”

Trump was referring to an email allegedly belonging to Hunter Biden, and obtained by Fox News. The email, dated May 13, 2017, includes a discussion of “remuneration packages” for six people in a business deal with a Chinese energy firm. The email appeared to identify Hunter Biden as “Chair/Vice Chair depending on an agreement with CEFC,” an apparent reference to now-bankrupt CEFC China Energy Co.

The email includes a note that “Hunter has some office expectations he will elaborate.” A proposed equity split references “20” for “H” and “10 held by H for the big guy?” with no further details.

Fox News spoke to one of the people who was copied on the email, who confirmed its authenticity. Sources also told Fox News that “the big guy” was a reference to the former vice president.

The sense of urgency in Trump’s statements is palpable. Because the incriminating evidence adduced in Hunter’s emails calls into question if Joe Biden as a sleazy politician—treating the dignified office of the vice president as a for-profit Biden Inc.—even eligible to contest the presidential election.

Echoing the trite canard of a Russia hoax peddled by Natasha Bertrand for the Politico, Jeffrey Goldberg, the spin-doctor-in-chief of the weaponized neoliberal publication The Atlantic, wrote an article last month titled Trump is Putin’s ‘Useful Idiot’ [3].

After sufficiently proving his loyalty to the “American democracy” and the US-led “benevolent imperialism” that has ended “the age of darkness” in the post-colonial world and ushered it into “the age of enlightenment” under Washington’s neocolonial tutelage, Goldberg goes on to draw the attention of the readers to the momentous telephonic conversation that prompted impeachment show trial against Trump lasting through September last year to February.

“On July 25 of last year, Alexander Vindman, who, as the National Security Council’s director for European affairs, organized the call, listened, with other officials, to a conversation between Trump and the newly elected Ukrainian president, Volodymyr Zelensky.

“‘I would like you to do us a favor,’ Trump told Zelensky, working his way to the subject of Joe Biden: ‘There’s a lot of talk about Biden’s son, that Biden stopped the prosecution, and a lot of people want to find out about that, so whatever you can do with the attorney general would be great. Biden went around bragging that he stopped the prosecution, so if you can look into it …’

“Vindman was surprised by Trump’s approach, and by its implications. Like other American specialists in the successor states of the former Soviet Union, he was invested in the US-Ukraine relationship. And like most national-security professionals, he was interested in countering Russia’s malign influence—along its borders, in places like Ukraine and Belarus and the Baltic states; across Europe; and in American elections.

“Vindman’s first day at the National Security Council, July 16, 2018, was also the day that President Trump, meeting Vladimir Putin in Helsinki, told a press conference that he trusted Putin no less than he trusted US intelligence agencies. ‘I have confidence in both parties,’ Trump said, to the dismay of the intelligence chiefs who report to him.”

It’s worth pointing out here that either the neoliberal mediocrities like Jeffrey Goldberg really can’t distinguish between exchanging casual diplomatic courtesies and substantive policy decisions or he astutely elided over the clear distinction to whip up Russophobic hysteria among his credulous readers by uncovering imaginary plots and subversive collusion between purported “rogue executives” and “sworn enemies” of the neocolonial empire.

If you thought Goldberg couldn’t possibly get any more preposterous, wait until you hear out the last few paragraphs of the sanctimonious diatribe and the intimately patriotic conversation between the self-styled champions of “American democracy” and discernibly chauvinistic “liberal values.”

“Vindman came to find that Trump’s desire to impress Putin, and to shape American policy in ways that please Putin, has caused many former US intelligence officials, and even some officials who have worked directly for him, to suspect that he has been compromised by Russia.

“In his new book, Rage, Bob Woodward writes that Dan Coats, the former director of national intelligence, ‘continued to harbor the secret belief, one that had grown rather than lessened, although unsupported by intelligence proof, that Putin had something on Trump.'”

Without furnishing a shred of evidence albeit tacitly acknowledging “unsupported by intelligence proof,” the “credible columnist” of a widely circulated news publication lays bare his unsubstantiated hunch that “Putin has something on Trump.”

It could be anything, ranging from illicit financial kickbacks to extramarital affairs, or maybe something more sinister, such as the mainstream media’s favorite “QAnon conspiracy” that nobody read or heard about until the news media created the hype in the run-up to the US presidential elections.

“I ask Vindman the key question: ‘Does he believe that Trump is an asset of Russian intelligence?’

“Vindman replied: ‘President Trump should be considered to be a useful idiot and a fellow traveler, which makes him an unwitting agent of Putin.’

“Useful idiot is a term commonly used to describe dupes of authoritarian regimes; fellow traveler, in Vindman’s description, is a person who shares Putin’s loathing for democratic norms.”

After perusing these risible excerpts, it become abundantly clear that not only is the Atlantic’s editor-in-chief an authority on the domestic American politics but he is equally abreast of the history and culture of “authoritarian regimes” harboring malice against the only beacon of hope and light in the age of “benevolent imperialism.”

Despite the end of the Cold War three decades ago, this Russophobic paranoia, of which Natasha Bertrand and Jeffrey Goldberg are the embodiments, has infiltrated the establishment-controlled media so deep into the subconscious that it would require an enormous conscious effort to revert the American society back to the normal state.