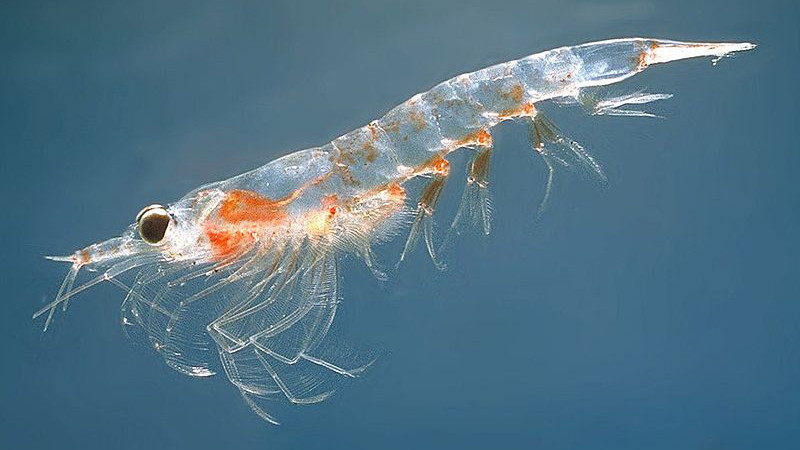 Krill is rapidly gaining popularity. The small shrimp-like organism from the Antarctic is used as fish food in aquaculture and increasingly in dietary supplements and healing ointments. Although the krill catch is regulated, caution is required to avoid endangering the population itself and the species that depend on it, warns a group of krill experts headed by Prof. Dr. Bettina Meyer from the Alfred Wegener Institute, Helmholtz Centre for Polar and Marine Research (AWI) in the journal Communications Earth & Environment – Nature.

Antarctic Krill, Euphausia superba, is a five-centimetre-long, reddish, shrimp-like animal which at first glance, may not appear as an impressive inhabitant of the Southern Ocean. But krill make up for their small individual sizes with the sheer number of their entire population. There is an estimated 300-500 billion Mt of krill in the Southern Ocean comprised of some hundreds of trillions of individuals. This massive biomass makes krill a key component of the local ecosystem. It is the main food source for many predators from fish, penguins and seabirds to seals and whales.

Humans have also developed an interest in krill over the past decades. Norway, along with Korea, China, Chile, the Ukraine and Japan trawl for krill in the Southern Ocean. But the fishing industry has become more efficient at catching krill using not only traditional fishing nets, but new continuous pumping systems. The demand for krill will likely increase, driven by at least two industries. First the increasing production of carnivorous fish through aquaculture, such as salmon, and the subsequent increase in demand for fish meals and marine byproducts. Second, the increasing demand for high value pharma- and nutraceutical products from krill oil and krill meals, such as wound ointment and krill oil capsules for human use and pet food.

The krill fishery is managed by the Commission for the Conservation of Antarctic Marine Living Resources (CCAMLR), which was founded in 1982. This body uses surveys and model calculations to determine how much krill may be caught and where it may be caught. The Atlantic sector of the Southern Ocean has the highest concentration of both krill stocks and fishing fleets. This region alone has a maximum allowable catch of 620,000 tons per year distributed over different fishing areas.

This is only a fraction of krill that are estimated to live in the ocean around Antarctica. CCAMLR had long assumed that the established catch limits would not cause serious damage, but krill experts like Bettina Meyer now see things differently. “The problem is that the catch regulations have, so far, been aimed primarily at protecting the krill eaters,” explains the researcher. “Too little attention, has been paid to possible risks for the krill stocks themselves.

This is due to the fact that relatively little is still known about some aspects of the biology of these small crustaceans.” Financed by the Federal Ministry of Food and Agriculture (BMEL), Bettina Meyer, her colleague Dr. Ryan Driscoll and her research group are trying to shed more light on this issue. In a new publication, krill experts from around the globe summarize why there are several reasons to worry about the future of this key species.

In brief, krill abundances in some regions fluctuate greatly from year to year. However, the causes of these fluctuations are not yet clear and the current management of krill does not adjust the catch accordingly. Furthermore, it is likely that only a small part of the population, limited to a relatively small area, provide the offspring for the entire Atlantic part of the Southern Ocean. Finally, little is known about where the new generation migrate to in their first year. This means that it is possible that the most important parts of the population, the future parents and their offspring, will be overfished.

In 2019 CCAMLR decided to develop a new krill management system to address these issues. The committee is advised by the “Krill Action Group” under the umbrella of the Scientific Committee of Antarctic Research (SCAR), which was founded in 2018. It currently consists of 46 international members, half of which are established and half early career scientist. “Our goal is to provide CCAMLR with the latest knowledge on the size, distribution and dynamics of krill stocks.” explains Bettina Meyer, who heads this expert group.

The future of krill management will require answering lingering question in key areas of krill biology. For example, understanding how krill populations in different regions are connected and how adults and juveniles differ in their location and movement. Also unknown are the environmental conditions responsible for determining good or bad krill years. The Atlantic sector of the Southern Ocean is warming rapidly and so understanding how krill will adapt to climate change is crucial. As for the latter, “CCAMLR’s previous models do not take this plasticity into account,” explains Bettina Meyer, “But we need to know more about this if we are to be able to predict future changes in the ecosystem.”

Bettina Meyer and her colleagues have some concrete ideas about how the missing data can be collected. Since space and availability for scientific expeditions aboard research ships are limited, scientists could rely on the support of the fishing fleets. Together, these fishing vessels have the potential to collect a substantial amount of krill data which can help close critical knowledge gaps.

In addition, new technology may help scientists advance their understanding of krill stocks and their distribution. For example, autonomous underwater gliders, which look like mini gliders with a wingspan of about 1.50 metres, can be equipped with cameras, sensors, and echosounders to search for krill. They can roam the ocean from the surface down to 1000 metres for several months, collecting data on the density and distribution of krill.

Another promising technology are advanced moorings, equipped with arrays of sensors to measure water properties and krill density. These stationary devices can provide important information almost year-round in areas critical to the management of the krill fishery. Even krill predators, the whales, seals or penguins, can be recruited to help using attached camera systems and probes equipped with GPS.

“All of this can provide us with valuable new information for better krill management,” says Bettina Meyer who is convinced by this approach. But in order to cover large areas of the Southern Ocean it is important to coordinate these research efforts internationally: “As a lone warrior, nobody can answer the complex questions of krill research.”

The article The Future Of Krill appeared first on Eurasia Review.