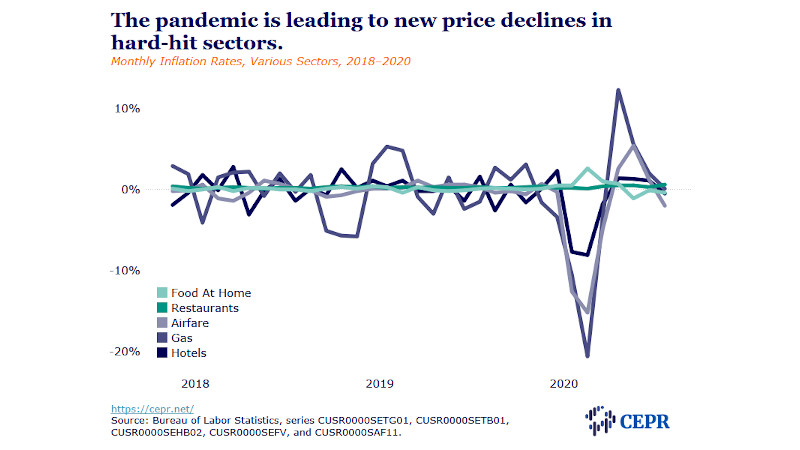 The overall and core Consumer Price Index (CPI) both rose 0.2 percent in September, driven in large part by an extraordinary 6.7 percent jump in the price of used cars. The overall index is now up 1.4 percent from its year-ago level, while the core index is up 1.7 percent.

The most striking feature in the September price data is the return of pandemic price patterns in several hard-hit sectors. For example, hotel prices fell 0.5 percent in September, after sharp price rises in the prior three months. Hotel prices fell 16.7 percent between February and May. They are now 15.0 percent below year-ago levels.

Airfares fell 2.0 percent, also after three months of sharp price increases. Airline prices had dropped 29.5 percent from February to May. Airfares are 25.0 percent below their level from last September.

Apparel prices also reversed patterns, dropping by 0.5 percent in September after rising rapidly the prior three months. Apparel prices fell by 8.8 percent from February to May. They are now down 6.0 percent from year-ago levels.

Not all patterns were reversed in September. Prices for store-bought food fell by 0.4 percent, its third consecutive decline. Food prices had risen sharply during the shutdown months as people largely stopped eating at restaurants. They are now 4.1 percent above the year-ago level.

By contrast, restaurant prices are now rising rapidly, going up 0.6 percent in September. They have risen by 1.3 percent over the last three months even as the price of store-bought food was declining. This reverses the pattern from the shutdown months when the price of store-bought food substantially outpaced price increases in restaurants. The sharper price increases in restaurants are likely to continue as they pass on higher costs associated with safety precautions. Restaurant prices are now up 3.8 percent over the last year.

Rents continue to slow, with both the rent proper and the owners’ equivalent rent (OER) index rising just 0.1 percent for the month. The rent proper index has risen at just a 1.8 percent annual rate comparing the last three months (July, August, September) with the prior three months (June, July, August). The OER index has risen at a 1.9 percent annual rate. By comparison, in the year from February 2019 to February 2020, the rent proper index and OER index had risen by 3.8 percent and 3.3 percent, respectively.

The sharp jump in used car prices in September, follows large increases in the prior two months. They are now 15.1 percent higher than their June level, and 10.3 percent above the year-ago level. There was no corresponding rise in new vehicle prices, which rose just 0.3, and now stand 1.0 percent above year-ago levels. Used car prices are often erratic, but then tend to rise sharply following natural disasters when many cars are destroyed. The fires in the west and hurricanes and flooding along the Gulf Coast could be factors in this rise.

The overall pattern here suggests that inflation will likely remain low for the foreseeable future. The slowdown in rents has a huge impact because of their large weight in the overall and core indices. It is striking to see the price reversals in several of the hard-hit sectors, which would be consistent with a response to the resurgence of the pandemic.