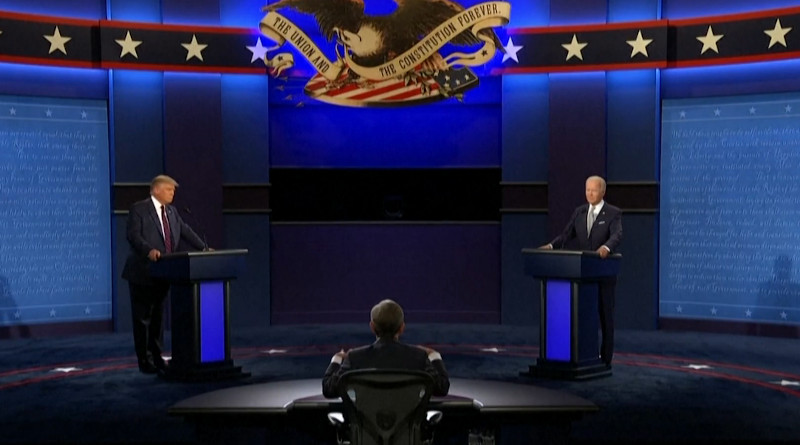 With less than a month to go, the 2020 US presidential election must already be marked down as one of the most extraordinary in history. A poll in a pandemic, a president laid low by the virus and the death of a Supreme Court justice in the final weeks are just the headline features, without mentioning the peculiarities of the two candidates. The world is watching, perplexed and nervous. No matter where one stands on the extent of the US’ decline, who sits behind the Resolute desk in the White House and who controls the Senate matters. How the US handles its international relations affects us all.

Foreign affairs have, though, been foreign to this election campaign. The first and perhaps now only presidential debate did not stray into the international arena, which is somewhat concerning given that the US president has such powers in this field. For voters, the coronavirus disease, the economy, law and order, and racism are more pressing. As important as the Abraham Accords are, voters in Wisconsin and Michigan will not be contemplating the Middle East as they vote.

What is at stake in terms of foreign affairs? In many ways, it is hard to tell. International events are chaotic and fluid at present, so the style of leadership and approach may be key. At the start of his term, Trump was threatening North Korea, on the verge of war; more recently, he has boasted of his “love letters” from Kim Jong Un. What has been consistent is his transactional “America First” approach and hard-line anti-immigration stance. He has taken key decisions — such as the US strike in January that killed Qassem Soleimani — with little to no discussion with partners such as the UK or France. He has borderline contempt for multilateral institutions, from the UN to NATO and the EU. And, against the Republican grain, he is an anti-globalist and is anti-free trade.

Former Vice President Joe Biden is no foreign affairs novice. He was chairman of the Senate Foreign Relations Committee. Critics point out that, unlike Trump, he was in favor of the disastrous 2003 Iraq War, yet he did warn: “It would be a tragedy if we removed a tyrant in Iraq, only to leave chaos in its wake.” Supposedly, Biden was skeptical that the US was ready for the Navy Seal raid that killed Osama bin Laden in Pakistan in 2011. Meanwhile, it seems Trump did not hesitate to take out key figures in the Daesh leadership, including Abu Bakr Al-Baghdadi.

The Democrat challenger has committed himself to revoking some linchpin Trump acts on Day 1 if he takes office. Biden will end the travel ban against people from Muslim-majority countries, certainly a welcome move. He will rejoin the Paris Climate Accord, also on Day 1 — a huge departure from climate change denier Trump. Trump ignored many conflicts where he did not feel the US had a direct interest. Biden will not.

Disarmament and the nuclear file also show the candidates at loggerheads. Trump talks tough on Iran and now soft on North Korea; Biden is closer to the inverse of those positions. Trump left the 2015 Iran nuclear deal and now vows to maintain his maximum pressure policy and prevent Iran from getting a nuclear weapon. What is not clear is how far this war-averse president is willing to go to prevent this, as Iran is pushing toward that goal.

Biden will re-engage with talks with Tehran, especially in his first six months, when Hassan Rouhani will still be president, with a hard-liner expected to succeed him next year. This may be the vital window for Biden as he tries to rekindle the 2015 deal, while aiming to limit Iranian interference in the region.

Trump is not a fan of arms control treaties, largely seeing other countries — notably China and Russia — exploiting them. Biden, conversely, will pursue an extension of the New START treaty that limits the number of American and Russian nuclear warheads. This is due to expire in February 2021. Russia says that it is willing to extend.

These are all areas in which the two candidates take a complete polar opposite view. Yet, whisper it, a few commonalities do exist. Trump and Biden are both ill-disposed to overseas military adventures. Both want to exit the “forever wars” the US has become bogged down in, such as Afghanistan. Biden has spoken about keeping just 1,500 to 2,000 troops in the Middle East and Afghanistan, an aim that is perhaps unlikely to be realized. Trump had to fight his military top brass to get any reductions.

Both are also fully committed to Israel’s security. Trump has gone further than any of his predecessors on this path, notably by moving the US Embassy to Jerusalem and by not opposing settlements, but Biden’s history shows he is far from an Israel critic. However, he has committed to trying to re-engage with the Palestinian leadership and potentially restoring US funding. Both contenders are also pro-sanctions, Trump more than Biden, but these will remain a prime part of the US foreign policy toolkit whoever wins on Nov. 3.

Another huge area of difference is that Trump has never missed an opportunity to cut overseas aid, while Biden will view it as a tool of US soft power.

Much of the above is what Donald Rumsfeld would have described as “known knowns.” Neither candidate is weighed down by a heavily detailed foreign affairs agenda. On many crises, one is left with educated guesswork. Syria — perhaps Barack Obama’s greatest foreign policy failure — does not even get a mention on Biden’s website.

Will a second-term Trump act differently? Will he continue to focus on undoing everything Obama did as his guiding tenet? Is there some grand deal he will try to fashion? As for Biden, will he just be a continuation of the Obama era or does he have a Biden doctrine up his sleeve? Obama made much of pivoting to Asia, but will Biden continue this?