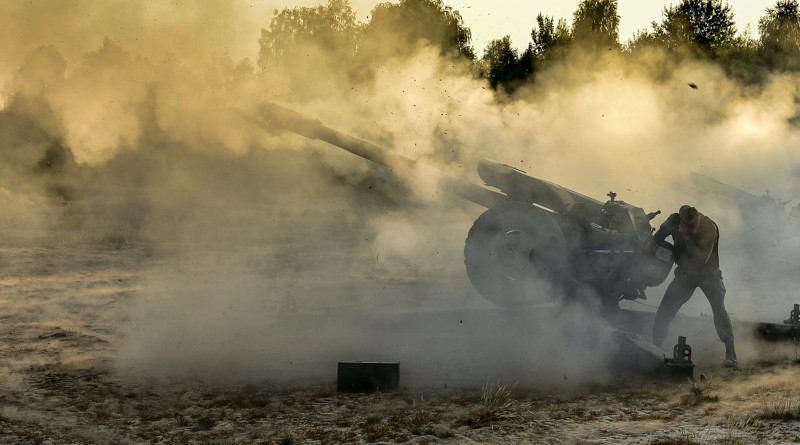 (RFE/RL) — Russia’s support of Alyaksandr Lukashenka may come at a price that could alter the balance of power in Europe as the Kremlin flexes its military might on the eastern fringes of NATO and exacts concessions from the embattled Belarusian strongman.

Lukashenka, in power since 1994, finds himself facing international isolation since declaring himself the winner of a disputed August 9 election and brutally cracking down on protests and rounding up opposition leaders. The EU and United States announced they would not recognize him as the legitimate president after Lukashenka held a secret inauguration on September 23.

Putin, however, has extended a hand to Lukashenka — who in the past used the EU and Washington to counter Russia’s dominant position — including offering possible military assistance to put down what both leaders agree, without providing a shred of proof, is a foreign-inspired uprising.

Russia, which has long sought permanent military bases in Belarus, has increased its military activity in and around Belarus in what is its last friend on its border with Europe after an anti-Russian government emerged in Kyiv in 2014.

A stronger Russian military presence in Belarus would alter the geopolitical chessboard in Europe, argued Keir Giles, author of the book Moscow Rules and a consulting fellow at London’s Chatham House.

“The presence of Russian forces in Belarus — along with the air and missile forces they could be expected to bring with them — would substantially alter the security situation for a wide area of Central Europe,” Giles told RFE/RL.

“Popular scenarios for Russian military adventures such as a move on the Suwalki gap — the strip of Polish-Lithuanian border separating the exclave of Kaliningrad from the rest of Russia — would no longer be several geopolitical steps away.”

Russia and Belarus are already linked closely militarily. They have an integrated air- and missile-defense system, plus a regional group of forces comprised of four Belarusian brigades and special forces and the Russian 20th Guards Army. Moreover, Belarus is a member of the Russia-led Collective Security Treaty Organization (CSTO).

During the current crisis, Lukashenka has claimed that Putin has assured him the CSTO would provide aid amid unfounded claims that NATO had massed troops on Belarus’s western border.

On the ground in Belarus, Russia leases two military sites: a strategic ballistic missile defense site operated by Russian Aerospace Forces in Hantsavichy and the global communications facility for the Russian navy in Vileyka.

But for the Kremlin a permanent base has long been the goal, explained Nigel Gould-Davies, a former British ambassador to Belarus and a senior fellow at the International Institute for Strategic Studies.

“Moscow has been seeking an air base since at least 2013. It has already had two smaller facilities: a radar and a naval communications transmitter. But a base would be a significant development, given that Belarus borders three NATO members,” Gould-Davies told RFE/RL in written comments.

In 2015, Putin pushed the deal for the base for Russian Su-27 fighter jets, only to have Lukashenka balk in what Russian Foreign Minister Sergei Lavrov later described in September 2019 as an “unpleasant episode.”

Refusing to toe the line on either move, Lukashenka began to ponder his own country’s territorial integrity and began to warm to the West again, a frequent strategy of his when relations with Russia sour.

With an anti-Kremlin government now in power in Kyiv, Belarus “acquired a new significance for Russian strategy,” Nicholas Myers, a military analyst, recently wrote, especially along the Suwalki Gap, linking to the Russian exclave of Kaliningrad, also a key Russian military site.

His hold on power tenable, Lukashenka may be amenable to an air base, plus extending the leases on the other two facilities, which are due to expire in June 2021.

“Today, as Lukashenka’s negotiating power has almost vanished, Russia has all the cards in its hands to achieve this strategic objective,” explained Laurynas Jonavicius, a researcher and assistant professor at the Institute of International Relations and Political Science at Vilnius University.

However, Moscow may not rush to push its advantage, fearing that siding too closely with an unpopular ruler whose days may be numbered makes little sense and could spark a public backlash.

“Since Lukashenka’s bet right now is on Russia’s support to stay in power, any radical move to that on Russia’s side may provoke a very negative reaction of the angry society. Moscow does not want to alienate [the] Belarusian people — like it did with the Ukrainians,” Jonavicius told RFE/RL.

Many observers see parallels between Lukashenka and former Ukrainian President Viktor Yanukovych, who was pushed from power after the Maidan protests in late 2013 and early 2014.

A month after his ouster in February 2014, Russian annexed Crimea and a month later began supporting separatists in eastern Ukraine.

“Just as with Ukraine, Russia was considered likely to intervene if it seemed to Moscow there was a danger of ‘losing’ Belarus to the West. In the past six years, there have been endless discussions of what might prompt another Russian military intervention in Europe after Ukraine. In many of these scenarios, it is precisely the situation currently unfolding in Belarus that has been top of the list, with all the wide-ranging implications for security of the continent as a whole that would follow,” explained Giles.

“There are many differences between Belarus and Ukraine; but also, when considering the possibility of Russian intervention, key similarities. Instability, and the danger of losing an effective veto on Belarus aligning itself with Western alliances, would cause just as deep concern in the Kremlin today as it did with Ukraine in 2014,” Giles said.

Giles and other analysts doubt there will be any Russian invasion of Belarus, seeing the moves as part of an effort to bolster Russia’s military presence.

“It is likely that Russia will try to exploit the crisis in Belarus to increase its military presence there. Such presence can take a form of much more frequent exercises and rotational presence of troops,” explained Wojciech Lorenz, a security analyst at the Warsaw-based Polish Institute of International Affairs.

Russian troops have been rotating in and out of Belarus recently under the cover of military drills.

In September, Russian forces deployed to Brest, Belarus, just 5 kilometers from the border with Poland, as part of annual exercises.

The Slavic Brotherhood drills from September 15 to 25 were a message from Russia to NATO, Giles said.

“Over and above the creeping normalization of Russian military activity in Belarus, which may morph into a semipermanent presence, the clear message Russia is sending to NATO is that it can completely change the strategic position by delivering and inserting forces to those border regions with Belarus in a matter of hours,” Giles explained.

The Russian Defense Ministry said the exercises were a “response to NATO actions” along the border — not of Belarus, but of the union state of Russia and Belarus.

More drills — Unbreakable Brotherhood-2020 — are planned for Belarus between October 12-16 under the CSTO umbrella, with troops from Armenia, Kazakhstan, Tajikistan, as well as Belarus and Russia due to participate.

Belarus was announced as the site for these by the Russian Defense Ministry on September 15, one day after Putin and Lukashenka met in Sochi, during which the Russian leader handed Lukashenka a $1.5 billion state loan to keep his regime afloat. During those talks, Putin and Lukashenka agreed to extend the Slavic Brotherhood drills to September 25 and to hold “almost monthly” joint military exercises in the two countries in 2021.

Amid the drills in Belarus, Russia’s Western Military District (WMD) conducted an “abnormally high number of exercises in late September,” according to the Washington-based think tank The Institute for the Study of War (ISW).

As Russian and Belarusian troops drilled in September, U.S.-led multinational air defense drills were held in Lithuania, Poland, and Germany between September 12-27.

The U.S. Army said the exercise — Tobruq Legacy 2020 — “is a long-planned defensive oriented exercise not tied to any current events in the region.”

NATO maintained the alliance is “strictly defense” and ready to defend NATO allies.

“All NATO allies support a sovereign and independent Belarus and we expect all other countries to do the same. The alliance remains vigilant, strictly defensive, and ready to deter any aggression against NATO allies. NATO’s presence in the eastern part of the alliance is designed to prevent aggression and preserve peace,” a NATO official told RFE/RL in written remarks.

Amid regional fears sparked by Russian aggression against Ukraine, the United States has some 4,500 troops in Poland. In June 2019, the two countries agreed to allow 1,000 more rotating U.S. troops.

The possibility of more Russian forces in Belarus will only add to security concerns for NATO, argued Gustav Gressel, a senior policy fellow at the European Council of Foreign Relations.

“The additional Russian forces in Belarus will further increase enemy forces at the border with NATO. Being able to use Belarusian territory, NATO will also be even more exposed geographically,” Gressel said.

“Defending the Baltics was a race against the clock, and now [with possibly more troops] Moscow chips away two to three days from that equation.”

We talk a lot about how content moderation involves a lot of hard decisions and trade-offs—but at the end of the day, someone has to make a decision about what stays on a platform and what comes down. This week on Arbiters of Truth, our series on the online information ecosystem, Evelyn Douek and Quinta Jurecic spoke with “The Decider”—Nicole Wong, who earned that tongue-in-cheek nickname during her time at Google in the 2000s. As the company’s deputy general counsel, Nicole was in charge of decisionmaking over what content Google should remove or keep up in response to complaints from users and governments alike. Since then, she moved on to roles as Twitter’s legal director of products and the deputy chief technology officer of the United States under the Obama administration. In that time, the role of social media platforms in shaping society has grown enormously, but how much have content moderation debates really changed? Quinta and Evelyn spoke with Nicole about her time as the Decider, what’s new and what’s stayed the same since the early days of content moderation, and how her thinking about the danger and promise of the internet has changed over the years.