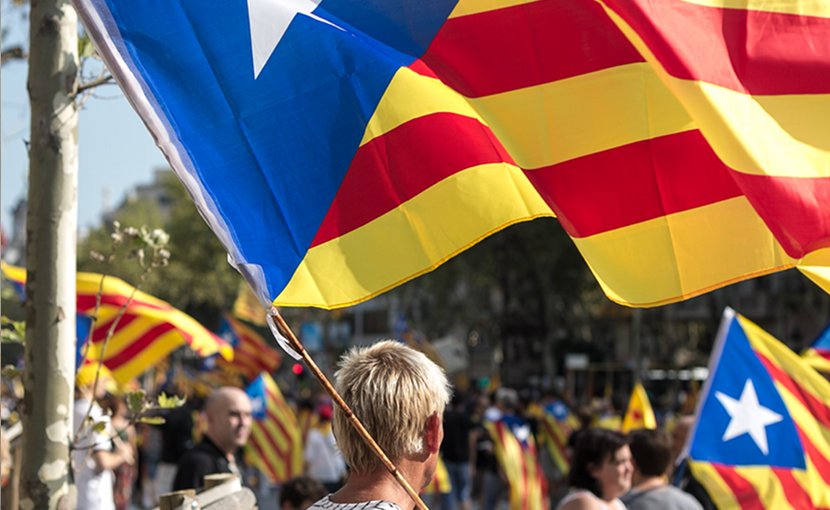 Protests take place in Barcelona on the 3rd anniversary of a banned referendum on Catalan independence, and just three days after Spain’s top court upheld a court ruling disqualifying the region’s separatist president from office.

But compared with previous years, the demonstrations on the third anniversary of the October 1, 2017 referendum were sparse, with all mass gatherings banned under coronavirus restrictions, AFP reported.

Fifteen of the arrests took place in Barcelona while another person was detained in the city of Girona, about 100 kilometers (60 miles) further north, police in the wealthy northeastern region said.

This year’s anniversary came as Spain battles a second wave of coronavirus cases, chalking up close to 780,000 infections as of Thursday night, the highest number in the European Union, and almost 32,000 deaths.

The 2017 referendum saw police violently cracking down on would-be voters as regional leaders pushed ahead with a ballot that Madrid had declared illegal.

Later that month, Catalan lawmakers narrowly approved a motion to declare an independent republic, sparking an immediate backlash from Madrid.

The failed independence bid also stoked political divisions within the Catalan separatist movement, which have sharpened in the ensuing three years.

On Thursday night, several hundred demonstrators gathered outside the Catalan regional government’s headquarters in Barcelona, accusing the authorities of not making good on their promise of independence from Spain.

Around 300 protesters later continued the protest in the city center, hurling objects at police vans and burning barricades, an AFP correspondent said.

Although the regional government is dominated by separatist parties, there are deep divisions within their ruling coalition about what strategy to adopt to achieve independence.

Catalonia is now heading towards an early regional election after its president, Quim Torra, was disqualified from office earlier this week when Spain’s Supreme Court upheld a previous conviction for disobedience.

Torra was convicted for refusing to remove a banner with separatist slogans from his government’s headquarters in the run-up to the April 2019 general election.

Torra’s deputy, Pere Aragones, is to serve as interim regional chief until the election, which is expected to take place in February.