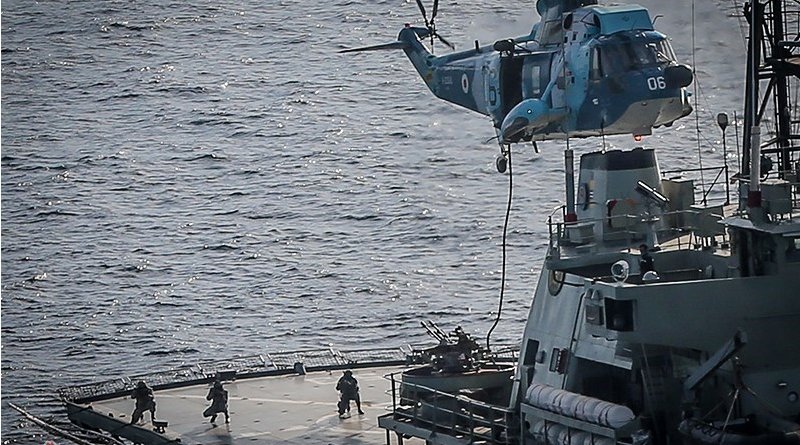 The intensification of the military conflict between Armenia and Azerbaijan in recent days has overshadowed what may prove to be an equally, if not more, fateful shift in the Caucasus: the expansion of Russian and Iranian military-to-military ties, involving not only joint maneuvers in the Caspian Sea and the Gulf, but also Tehran’s offer to Moscow to use three naval bases on its Gulf coast.

Many Iranian commentators and some in Moscow now are even speaking about the creation of “a Russian-Iranian military alliance” that will allow the two countries to oppose the United States’ presence in the Gulf and threaten the vital oil shipping lanes that the US has helped keep open.

Russia and Iran have been talking about expanding such ties for several years. But in the last several weeks, their cooperation—which Tehran has celebrated in Iranian media but which Moscow has, until now, understated—appears to have assumed a more concrete form. At least in part, this is because the United Nations’ restrictions on Iran’s importation of weapons from foreign countries, including Russia, will expire in mid-October. Both governments hope that Russia will then be in a position to sell much-needed military systems to the Iranians without inviting further sanctions (Zavtra.ru, September 28).

Talks between Moscow and Tehran about expanding military cooperation have been going on since the summer of 2019. At that time, the two sides reportedly signed an agreement to promote such ties (Nezavisimaya Gazeta, July 30, 2019), an accord that Tehran-based outlets boasted about even as Moscow officially kept silent. Then, in August 2020, a large Iranian military delegation came to Moscow to prepare for Iranian participation in Russia’s Kavkaz (Caucasus) 2020 military exercises and to discuss further steps toward realizing a military alliance, according to independent Moscow military commentator Konstantin Dushenov. In a recent article, he adds that the two sides agreed to conduct regular naval exercises—not only in the landlocked Caspian Sea but also in the Gulf and its Strait of Hormuz (Zavtra.ru, September 28; Kaspiiskii Vestnik, September 21).

Russian as well as Iranian media outlets have stressed that the United States is alarmed by the prospect of such cooperation, citing an article in the US publication Military Watch (Military Watch, September 22). Washington does not want Iran to modernize its arsenal by purchasing Russian weapons, something that now seems likely unless Moscow unexpectedly changes course. But the US and the West will surely be even more alarmed if Iran’s reported offer of three naval bases for Russian use—Chabahar, Bender-Abbas, and Bender-Busher—is acted upon.

Russian officials have not yet said whether Moscow will accept the offer, but independent security analysts like Sergey Ishchenko are confident that the Russian navy will do so and proceed, employing “hybrid”-like means, to transform a Russian presence at these three Iranian facilities into something more, thus establishing new Russian naval bases abroad just as it did in the case of Syria earlier (Svobodnaya Pressa, September 25). That may be more problematic than Ishchenko thinks given that the Iranian constitution bans foreign bases on the country’s territory and that Iranian society is notoriously suspicious of having any foreign forces on Iran’s soil. Yet Tehran’s offer simultaneously suggests how difficult a situation militarily Iran now finds itself in and gives Russia, working with the Iranian navy or independently, a chance to dramatically expand its ability to project forces into the Gulf and beyond.

The Svobodnaya Pressa writer adds, however, that the prospect of Russian-Iranian cooperation, not only in the landlocked Caspian but in the Gulf, has already sparked fears among Washington officials about the future, as could be seen by what he described as panic following an Iranian drone attack on US naval vessels there last week. He suggests that Tehran may have been emboldened because it has Russia at its back; this cooperation thus opens the way, in Ishchenko’s words, “to drive the US out of the Persian Gulf.” Additionally, he quotes Iranian Admiral Hosseyn Hanzadi as saying that “from now on, Moscow and Tehran will regularly conduct joint maneuvers” not only on the Caspian but in the Gulf, something that will complicate any US response. It is one thing for the United States to respond to any Iranian mischief there, and quite another to respond to something Russia is either doing behind Iranian cover or, eventually, boldly on its own.

All this is happening while the Armenian–Azerbaijani conflict continues in its latest “hot” phase, but it may not be unrelated to that development. Because Tehran wants Russian naval cooperation so badly, Moscow could be in a position to insist that Iran restrain itself from becoming involved in any way in the conflict between the Islamic Republic’s two northern neighbors, thus giving the Russians greater leverage there. That could help limit the conflict between Yerevan and Baku, but only at the price of opening the way to a dramatic expansion in Russia’s military presence beyond its borders against the West.

The article Russia, Iran Expand Military Cooperation Against US And Europe In Gulf – Analysis appeared first on Eurasia Review.