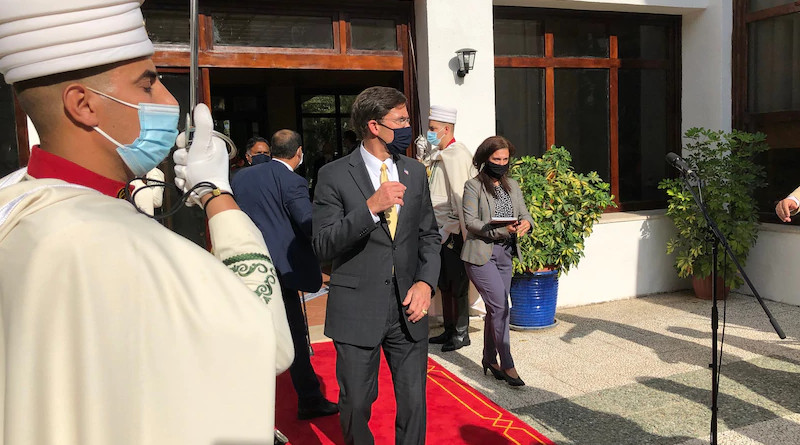 The secretary thanked Tebboune for the longstanding relationship between the two nations and praised the nation for its leadership in promoting regional stability. He also thanked the president — who also serves as defense minister — for his hospitality.

The two leaders discussed the security situation in North Africa and the Sahel, the way forward in Libya and the uncertainties in Mali. They also discussed the threats from violent extremist organizations in the region and beyond.

Esper particularly noted the discussions on how to improve U.S. military cooperation with the armed forces of Algeria.

“There are a number of areas where we plan to increase our cooperation, such as in counterterrorism. We look to improve our exercises and training together,” Esper said. “We also discussed other issues involving our militaries, which I am confident will increase our interoperability as well.”

Algerian officials said that Lt. Gen. Said Chengriha, the military’s chief of defense, also participated in the discussions with Esper.

Before arriving at the presidential office, Esper placed a wreath at the Martyrs Monument. The monument stands as a memorial for the more than 1 million Algerians who lost their lives fighting for independence from France, which they gained in 1962.

“I want to say to the Algerian people, how much we respect their sovereignty. We enjoy their cooperation and admire their history,” Esper said.

Esper is the first U.S. defense secretary to visit the nation since Donald Rumsfeld in 2006. With a population of more than 42 million, the country is one of the largest in North Africa, and the nation appears to be willing to play a more assertive role in the region, said a defense official speaking on background.

Esper arrived in Algeria after visiting Malta and Tunisia. It is part of a series of visits through the region in an effort to build new alliances and strengthen old ones.