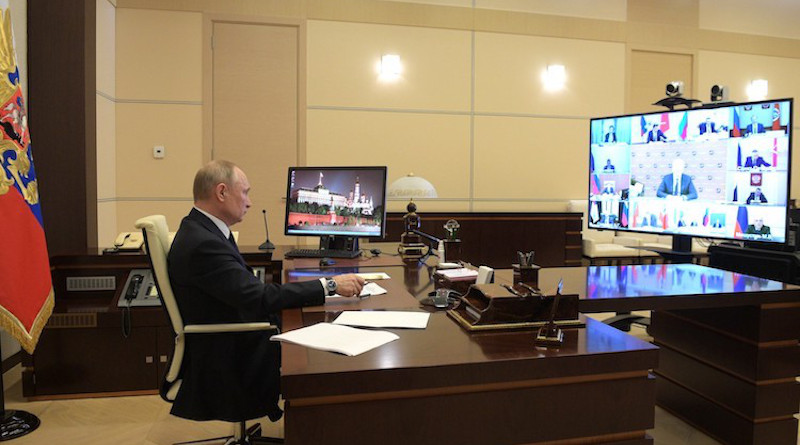 Citing sources in the Kremlin, the media watchdog group, Project Media, says that no one will be allowed to meet Vladimir Putin face-to-face unless he or she has undergone a two-week quarantine to ensure that visitors won’t infect him with the coronavirus (proekt.media/narrative/vaktsina-koronavirus/#blat).

The Kremlin issued a non-denial denial saying that decisions about who would have to undergo such quarantines would be made on a case-by-case basis. If the individual comes from a place or agency where there are many cases, a quarantine will be required; if not, then it won’t be (interfax.ru/russia/729325).

These reports underscore what many had assumed up to now: that the Kremlin leader hasn’t been vaccinated or doesn’t trust the Russian vaccine he is calling on Russians to get and that he will remain largely “in the bunker,” as Russians have taken to describing his approach since the pandemic began.

The pandemic continues to ebb and flow across Russia, hitting Moscow and other major urban centers especially hard and forcing officials in those locations to reverse some recent re-openings (regnum.ru/news/society/3077734.html). For Russia as a whole, the authorities registered 8431 new infections and 177 new deaths, bringing the totals for those categories respectively to 1,176,286 and 20,722 (t.me/COVID2019_official/1612).

Putin spokesman Dmitry Peskov said that Moscow’s priorities were not to shut down the country again but rather improve the medical system to respond to new infections, a claim that many dismissed given new closures including a near total shutdown in Kaliningrad and warnings that more limitations are ahead from other officials (regnum.ru/news/3077816.html, regnum.ru/news/3078224.html and regnum.ru/news/3078079.html).

Moreover, there have been more moves to enforce mask wearing, including bringing in the Russian Guards to help local police in some cities (regnum.ru/news/3077999.html), and in another sign fuller closures may be ahead, MosKontsert stopped selling tickets for shows in October (novayagazeta.ru/news/2020/09/30/164605-moskontsert-zamorozil-prodazhu-biletov-na-meropriyatiya-s-1-po-31-oktyabrya).

Given dramatic rises in the number of coronavirus infections among school children in recent weeks and the fact that the authorities are inclined to blame the spread of infections to their parents and hence the spike in overall numbers, ever more places are going over to distance learning, despite promises that this would not happen (regnum.ru/news/society/3072297.html, regnum.ru/news/3077794.html and ura.news/articles/1036281199).

The situation in Moscow is  particularly dire and officials there have ordered all teachers over the age of 65 to conduct instruction only via distance learning and in no case face-to-face with their pupils (novayagazeta.ru/articles/2020/09/29/87293-vse-pod-kontrolem-vse-rastet and tass.ru/interviews/9594555).

Today, Russian officials registered the second Russian coronavirus vaccine, the one prepared by Vektor Labs and allowed it to expand its testing regime (regnum.ru/news/3078009.html). Also today, Moscow announced officials would no longer check on all tests performed by private laboratories but only do so selectively (fedlab.ru/New Folder/роспотребнадзор.jpg).

And following the release of a new list of vaccines that will be free of charge to Russians, many began asking whether a coronavirus one would be added as it is not now on the list (meduza.io/cards/pravitelstvo-rossii-reshilo-sdelat-bolshe-privivok-besplatnymi-kakie-imenno-privivka-ot-koronavirusa-v-spiske-est).

On the economic front, a new study predicted that 39 percent of Russian companies would not survive a repeat of the coronavirus shutdown resembling the one last spring (rbc.ru/rbcfreenews/5f7226489a79477c787a89c0), and the Just Russia Party pressed for a credit holiday to help Russians recover (regnum.ru/news/3077816.html).

Meanwhile, in other pandemic-related developments in Russia today, Moscow economist Igor Nikolayev said that the saddest aspect of the pandemic in Russia today is that had the government acted more forcefully and consistently, Russia would not be suffering now as it is (echo.msk.ru/blog/nikolaev_i/2717141-echo/).

Despite the epidemiological disaster that Ingushetia is, officials there say they will not delay the celebration of the 250th anniversary of Ingushetia’s joining Russia (fortanga.info/2020/09/korona-prazdnik/).

And in a sure sign that the pandemic is serious, Russians are engaging in black humor about it. Two of the best anecdotes involve Moscow Mayor Sergey Sobyanin. In one, he “recommends elderly Muscovites not to distance themselves from cemeteries;” and in a second, he says that “there will not be a second wave of the coronavirus; instead, a third wave will begin immediately!” (maximonline.ru/humor/_article/luchshie-shutki-pro-vozobnovlenie-rezhima-samoizolyacii/).

The article Anyone To Meet Putin Will First Have To Quarantine For Two Weeks? – OpEd appeared first on Eurasia Review.