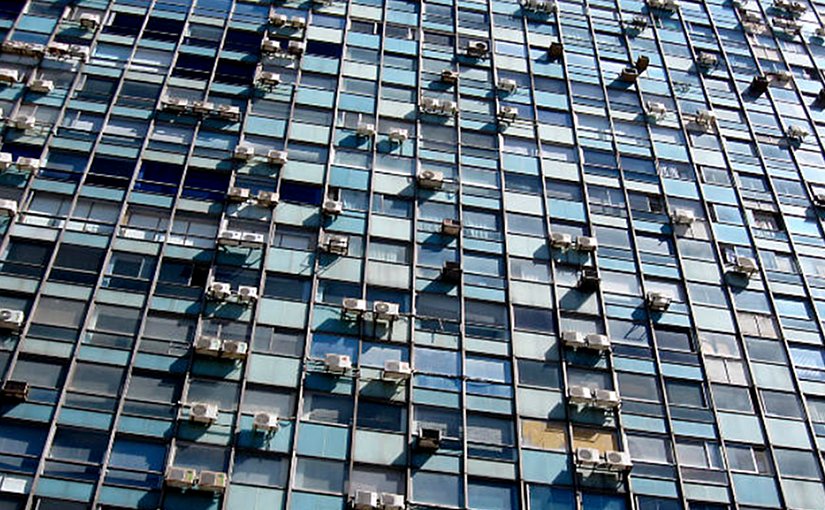 Ventilation systems in many modern office buildings, which are designed to keep temperatures comfortable and increase energy efficiency, may increase the risk of exposure to the coronavirus, particularly during the coming winter, according to research published in the Journal of Fluid Mechanics.

A team from the University of Cambridge found that widely-used ‘mixing ventilation’ systems, which are designed to keep conditions uniform in all parts of the room, disperse airborne contaminants evenly throughout the space. These contaminants may include droplets and aerosols, potentially containing viruses.

The research has highlighted the importance of good ventilation and mask-wearing in keeping the contaminant concentration to a minimum level and hence mitigating the risk of transmission of SARS-CoV-2, the virus that causes COVID-19.

The evidence increasingly indicates that the virus is spread primarily through larger droplets and smaller aerosols, which are expelled when we cough, sneeze, laugh, talk or breathe. In addition, the data available so far indicate that indoor transmission is far more common than outdoor transmission, which is likely due to increased exposure times and decreased dispersion rates for droplets and aerosols.

“As winter approaches in the northern hemisphere and people start spending more time inside, understanding the role of ventilation is critical to estimating the risk of contracting the virus and helping slow its spread,” said Professor Paul Linden from Cambridge’s Department of Applied Mathematics and Theoretical Physics (DAMTP), who led the research.

“While direct monitoring of droplets and aerosols in indoor spaces is difficult, we exhale carbon dioxide that can easily be measured and used as an indicator of the risk of infection. Small respiratory aerosols containing the virus are transported along with the carbon dioxide produced by breathing, and are carried around a room by ventilation flows. Insufficient ventilation can lead to high carbon dioxide concentration, which in turn could increase the risk of exposure to the virus.”

The team showed that airflow in rooms is complex and depends on the placement of vents, windows and doors, and on convective flows generated by heat emitted by people and equipment in a building. Other variables, such as people moving or talking, doors opening or closing, or changes in outdoor conditions for naturally ventilated buildings, affect these flows and consequently influence the risk of exposure to the virus.

Ventilation, whether driven by wind or heat generated within the building or by mechanical systems, works in one of two main modes. Mixing ventilation is the most common, where vents are placed to keep the air in a space well mixed so that temperature and contaminant concentrations are kept uniform throughout the space.

The second mode, displacement ventilation, has vents placed at the bottom and the top of a room, creating a cooler lower zone and a warmer upper zone, and warm air is extracted through the top part of the room. As our exhaled breath is also warm, most of it accumulates in the upper zone. Provided the interface between the zones is high enough, contaminated air can be extracted by the ventilation system rather than breathed in by someone else. The study suggests that when designed properly, displacement ventilation could reduce the risk of mixing and cross-contamination of breath, thereby mitigating the risk of exposure.

As climate change has accelerated since the middle of the last century, buildings have been built with energy efficiency in mind. Along with improved construction standards, this has led to buildings that are more airtight and more comfortable for the occupants. In the past few years however, reducing indoor air pollution levels has become the primary concern for designers of ventilation systems.

“These two concerns are related, but different, and there is tension between them, which has been highlighted during the pandemic,” said Dr Rajesh Bhagat, also from DAMTP. “Maximising ventilation, while at the same time keeping temperatures at a comfortable level without excessive energy consumption is a difficult balance to strike.”

In light of this, the Cambridge researchers took some of their earlier work on ventilation for efficiency and reinterpreted it for air quality, in order to determine the effects of ventilation on the distribution of airborne contaminants in a space.

“In order to model how the coronavirus or similar viruses spread indoors, you need to know where people’s breath goes when they exhale, and how that changes depending on ventilation,” said Linden. “Using these data, we can estimate the risk of catching the virus while indoors.”

The researchers explored a range of different modes of exhalation: nasal breathing, speaking and laughing, each both with and without a mask. By imaging the heat associated with the exhaled breath, they could see how it moves through the space in each case. If the person was moving around the room, the distribution of exhaled breath was markedly different as it became captured in their wake.

“You can see the change in temperature and density when someone breathes out warm air – it refracts the light and you can measure it,” said Bhagat. “When sitting still, humans give off heat, and since hot air rises, when you exhale, the breath rises and accumulates near the ceiling.”

Their results show that room flows are turbulent and can change dramatically depending on the movement of the occupants, the type of ventilation, the opening and closing of doors and, for naturally ventilated spaces, changes in outdoor conditions.

The researchers found that masks are effective at reducing the spread of exhaled breath, and therefore droplets.

“One thing we could clearly see is that one of the ways that masks work is by stopping the breath’s momentum,” said Linden. “While pretty much all masks will have a certain amount of leakage through the top and sides, it doesn’t matter that much, because slowing the momentum of any exhaled contaminants reduces the chance of any direct exchange of aerosols and droplets as the breath remains in the body’s thermal plume and is carried upwards towards the ceiling. Additionally, masks stop larger droplets, and a three-layered mask decreases the amount of those contaminants that are recirculated through the room by ventilation.”

The researchers found that laughing, in particular, creates a large disturbance, suggesting that if an infected person without a mask was laughing indoors, it would greatly increase the risk of transmission.

“Keep windows open and wear a mask appears to be the best advice,” said Linden. “Clearly that’s less of a problem in the summer months, but it’s a cause for concern in the winter months.”

The article Many Ventilation Systems May Increase Risk Of COVID-19 Exposure appeared first on Eurasia Review.