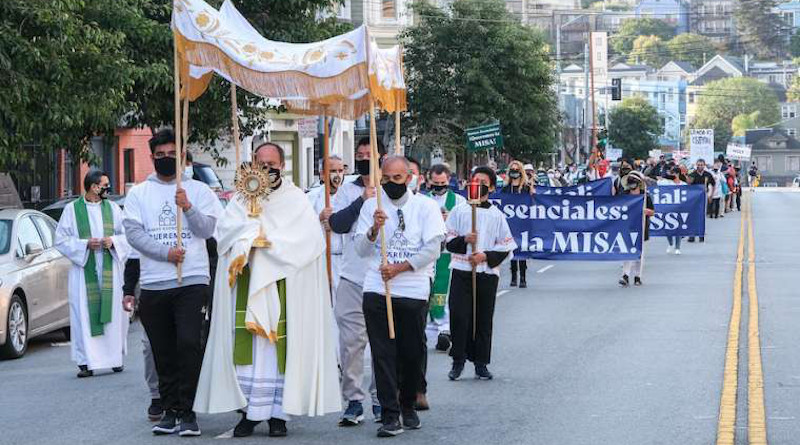 The office of San Francisco’s mayor announced Tuesday that places of worship will be permitted to hold services indoors at 25% capacity, up to 100 people, beginning Wednesday.

Restaurants will also be allowed to reopen for indoor dining at 25% capacity, up to 100 people.

Archbishop Salvatore Cordileone of San Francisco thanked the mayor, as well as the thousands of Catholics who urged that they be permitted to attend Mass.

“I want to thank Mayor London Breed for recognizing that faith is essential. As well, I want to thank the thousands of San Francisco Catholics and others who joined the processions, the more than 35,000 who signed the petition … came to St. Mary Cathedral’s outdoor plaza to witness to our faith, wrote letters to the editor or op-eds, and who generally spoke up with one united voice under the banner: We are essential! Free the Mass,” the archbishop said Sept. 29.

Breed’s office announced Sept. 29 that the expanded limits on places of worship will take effect Sept. 30.

The release attributed the changes to San Francisco’s move from California’s red, or substantial risk, tier, to the orange, or moderate risk, tier.

The California government’s Covid-19 website says that “counties in the Widespread (purple) tier may open some businesses and activities with modifications, including all retail, shopping centers at maximum 25% capacity, and hair salons and barbershops indoors.”

San Francisco authorities have been allowing capacities of between 10 and 50% at venues like gyms, tattoo parlors, hair salons, massage studios, and daycares.

The US Department of Justice had on Sept. 25 warned San Francisco officials that its restrictions on public worship in the city may be unconstitutional.

The city has been allowing only one worshipper at a time in places of worship, regardless of the building’s size, while allowing multiple patrons in other indoor establishments.

Until Sept. 14, public worship in the city was restricted to 12 participants outdoors, with indoor services prohibited. Beginning Sept. 14, 50 people were allowed at outdoor religious services.

Beginning Sept. 30, outdoor worship services may have up to 200 people. Singing or chanting indoors will be prohibited, and “the place of worship must conduct a health check of patrons before they enter the facility.”

Archbishop Cordileone said that “respect for each other’s rights and compassion for each other’s needs are core San Francisco values. God bless Mayor Breed for responding to her constituents’ call.”

He added, however, that “California’s limit of no more than 100 people inside of a house of worship regardless of the size of the building is still unjust. We want and we intend to worship God safely: with masks, social distancing, sanitation, ventilation, and other such safety protocols. But we will not accept believers being treated more severely than other, comparable secular activities.”

The article San Francisco To Allow Up To 100 People At Indoor Worship Services appeared first on Eurasia Review.