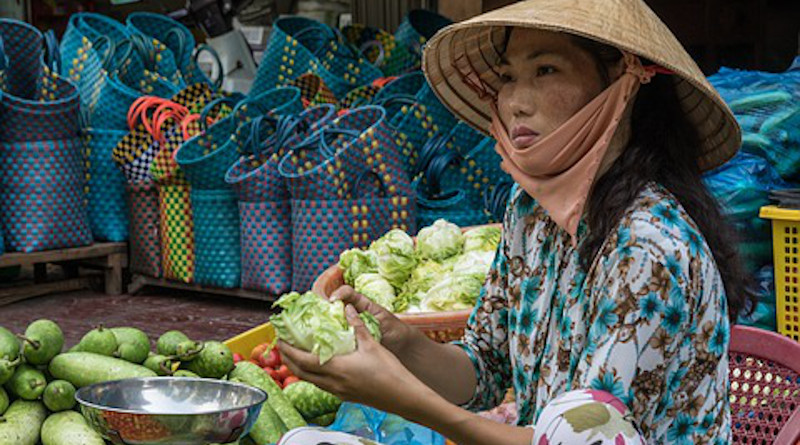 On August 21, Vietnamese Ambassador Pham Sanh Chau met with Indian Foreign Secretary Harsh Vardhan Shringla and briefed him regarding China’s increasing assertiveness and show of force in the South China Sea (SCS). Days after, India and Vietnam agreed to boost their economic and defense engagement further in a virtual meeting of the India-Vietnam Joint Commission on Trade, Economic, Scientific and Technological Cooperation, which was co-chaired by Indian Minister of External Affairs S. Jaishankar and his Vietnamese counterpart Pham Binh Minh. By significantly developing cooperation with Vietnam, India may also be able to attract other states in Southeast Asia to accommodate its partnership amid an increasingly assertive Chinese foreign policy.

Both states are wary of China’s rise and have forged closer strategic relations around that issue. In fact, Vietnam has welcomed India’s involvement in the South China Sea on numerous occasions. Hanoi has been granting Indian oil firm ONGC Videsh Ltd (OVL) extensions to explore oil block 128 which is an area of dispute between China and Vietnam in the South China Sea. Moreover, in 2019 OVL sought another two-year extension to explore the Vietnamese oil block. It must be understood that the oil block does not have significant economic benefits for India; however, the extensions come against the backdrop of New Delhi wanting to maintain a strong presence vis-à-vis China’s assertive manoeuvres in the contested waters. Moreover, the Indian Navy has been given the rights to use Vietnam’s southern port of Nha Trang which can be used for rest and recuperation (R&R), even in times of crisis.

Defense cooperation comes as an incredibly important dimension in the bilateral relationship. India has shown its willingness to enhance Vietnam’s military capability. In 2014, New Delhi extended a $100 million line of credit (LOC) to Vietnam to help acquire patrol boats. In 2016, India announced another $500 million LOC for Hanoi to help it procure military equipment from India. Another area of strategic cooperation lies in India’s capacity to offer training and maintenance for defense equipment, especially considering that New Delhi has developed a high level of proficiency in dealing with Russian defence equipment. This dimension of strategic partnership is expected to grow as Russian defense sales are also projected to increase in Southeast Asia.

Despite these developments, however, India-Vietnam strategic relations lack momentum considering that no significant results have materialized vis-à-vis the sales of the BrahMos cruise missiles and Akash surface-to-air missiles. Moreover, India’s reluctance to maximize its strategic engagement with Vietnam comes against the backdrop of the former’s appeasement policy toward China. However, recent trends suggest that India is willing to make a shift from that very policy orientation due to China’s increasing assertiveness along the border and the greater Indian Ocean region.

Calculated steps have been taken in this direction with India showing its willingness to play a more active role in in the SCS. Ministry of External Affairs spokesperson Anurag Srivastava told a weekly press briefing that India stands for the freedom of navigation and lawful commerce in the international waterways. “South China Sea is a part of global commons. India has an abiding interest in peace and stability in the region,” Srivastava said. “We firmly stand for the freedom of navigation, overflight, and unimpeded lawful commerce in these international waterways, in accordance with international law, notably UNCLOS,” he added.

It is in India’s best interest to forge closer strategic relations with the states of Southeast Asia. However, these relations are mostly confined within the Association of Southeast Asian Nations (ASEAN) framework; consequently, the level of strategic bilateral engagement remains low. Moreover, by enhancing the level of relations with Vietnam, India can incorporate the same template in engaging with other Southeast Asian states such as the Philippines which is also a key claimant state in the South China Sea dispute.

India’s main goal should be to uphold its ties with Hanoi and to use it as a model for other states in the region to forge closer strategic partnerships. India can engage with the states of Southeast Asia using similar elements that make-up India-Vietnam relations, such as the extending LOC for defense acquisition and the training and maintenance of defense equipment. Positive signs can be seen between India and the Philippines, as both states are also forging closer strategic relations amid China’s increasing coercion in the South China Sea. In a similar vein, India and Indonesia have also recently agreed to expand their strategic relations in the fields of defense and technology.

The way forward, however, is two-pronged. First, India must show greater commitment in the region if it seeks to enhance its strategic position there. By illustrating its desire and willingness to pay attention to the security issues that the states of Southeast Asia currently face, India will be able to signal its positive intentions. Second, India must deviate significantly from its appeasement policy toward China. History has shown that continuous appeasement has almost always led to the detriment of India’s security and national interests. As a major power in Asia, India will have to take and make decisions that reflect its evolving security and national interest.